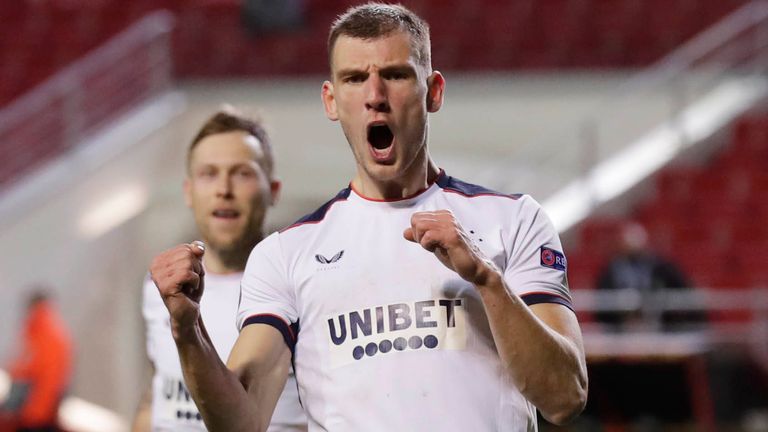 Joe Aribo’s clever finish gave Rangers the lead seven minutes before half-time, only for the hosts to hit back with two goals late on in the first half through Felipe Avenatti’s header and Lior Refaelov’s penalty after Steven Davis was harshly penalised for a foul on the Israeli.

However, Steven Gerrard’s team levelled matters via their own spot kick – awarded after a review by the Video Assistant Referee, who urged referee Georgi Kabakov to consult the TV monitor – with Barisic converting the resulting penalty just before the hour-mark. 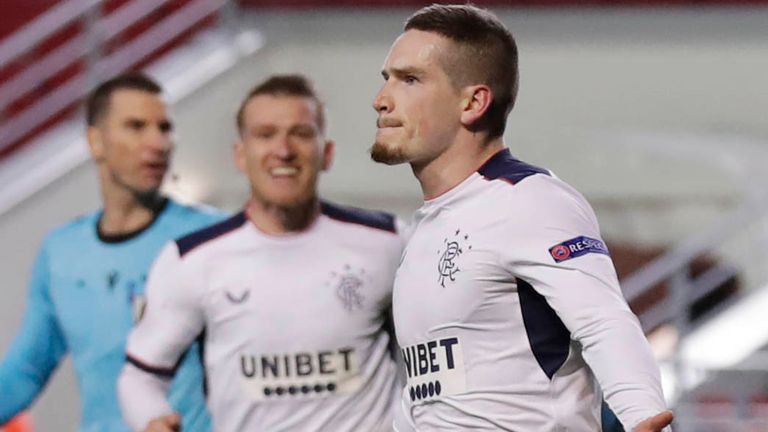 Antwerp were soon back ahead, though, thanks to Martin Hongla’s fine effort, only for the visitors to show great heart to deservedly turn the match on its head late on.

Firstly, substitute Ryan Kent equalised with a fine solo goal seven minutes from time, before Barisic kept his cool from the spot in the final minute to win it after Abdoulaye Seck had been sent off for giving away the penalty with a deliberate handball.

The second leg takes place at Ibrox next Thursday.

Man of the match: Borna Barisic

Despite facing injury-hit hosts, Rangers still knew they faced a stern examination of their European credentials at the Bosuilstadion against an Antwerp team sitting second in the Belgium top flight.

However, it appeared as though Rangers would deservedly be going in ahead at the break after they took a 38th-minute lead when Connor Goldson’s pass released Kemar Roofe on goal, only for the onrushing Ali Beiranvand to win the race for the ball. The back-up goalkeeper somehow then lost control of the ball, which broke to Aribo after Alfredo Morelos and Beiranvand battled for possession on the edge of the box, with the midfielder finding the net from 35 yards out.

But it was Antwerp who actually led at half-time. First Avenatti headed home Refaelov’s free kick in the 45th minute, and then the latter was brought down by Davis, before converting the spot kick in the eighth minute of injury time.

The visitors came out firing in the second period and it was no surprise when they levelled after Ritchie De Laet was deemed to have fouled Morelos in the box, albeit with the help of the VAR as Barisic netted the resulting penalty.

Seven minutes later, however, Rangers found themselves trailing once again after a well-worked Antwerp move ended with Hongla beating Allan McGregor with a fine shot from the edge of the box.

But just as Rangers thought they were would have to head home after a rare defeat, they hit back themselves with two goals late on, the first a real beauty from Kent, who played a neat one-two with Morelos, before curling home.

Steven Gerrard made five changes to the side that won 1-0 at home to Kilmarnock on Saturday, with Scott Arfield, Kemar Roofe and Alfredo Morelos all starting after recent injury and suspension problems, while both Fil Helander and Glen Kamara were also brought back into the team.

In a frenetic finale in which both sides had great chances to win it, it was the visitors who claimed the spoils in dramatic fashion after Seck blocked Kent’s goalbound effort with his hand.

The defender was sent off having picked up a second yellow, with Barisic – who was only on penalty duties after captain and regular taker James Tavernier was forced off in the first half with a knee injury – once again keeping his cool from the spot to hand his team a slender first-leg lead. Antwerp host STVV on Sunday (7.45pm), while Rangers take on Dundee United at Ibrox on the same day, with the Scottish Premiership game getting underway at 3pm.