A furious David Luiz has given a clear indication on how he feels following his red card in Arsenal’s 2-1 defeat at Wolves. The Gunners looked on course for a straightforward victory after Nicolas Pepe put them ahead midway through the first half.

But Arsenal’s evening took a turn for the worse on the stroke of half time when Luiz was shown a straight red card.

Willian Jose was played through one-on-one with the Bernd Leno before Luiz was adjudged to have brought down the Wolves forward in the box.

Referee Paul Tierney pointed to the spot and instantly pulled out a red card for the Arsenal defender.

The ‘triple punishment’ was finished off when Ruben Neves scored from the spot to level the game at 1-1 before the break. 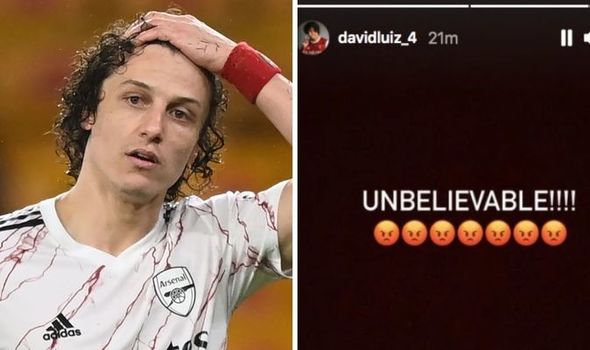 Joao Moutinho then gave Wolves the lead five minutes after the restart with a wonder strike from long range and things went from bad to worse for Arsenal when Leno got himself sent off for a bizarre handball outside his box.

Speaking after the game, Arteta made it clear that he was far from happy with the decision to send Luiz off.

“The way we lost the game really hurts, it’s painful. I’ve just seen the replay 10 times in five different angles and I cannot see any contact [between them],” Arteta said.

“If there is any contact it’s him [Willian Jose] with David. I don’t know if they have a different angle to what they have or you have.