Cesc Fabregas has joked he will “never forgive” Diego Costa for denying him a brilliant assist while at Chelsea. The former Blues midfielder cheekily called out the striker during a Twitter Q&A.

Fabregas joined Chelsea from Barcelona in 2014 for a fee in the region of £30million and dazzled fans upon his return to the Premier League.

The Spaniard ran the show in his maiden campaign for Jose Mourinho racking up 19 assists in 34 Premier League appearances as the team romped to the title.

He could have reached the magic 20, however, had Costa not fluffed his lines when put clean through against Swansea.

Fabregas sliced the Swans’ defence open with a half-volley pass but the striker failed to convert.

During a Twitter Q&A on Monday, Fabregas was asked by a Chelsea fan to pick out his favourite assist for the club. 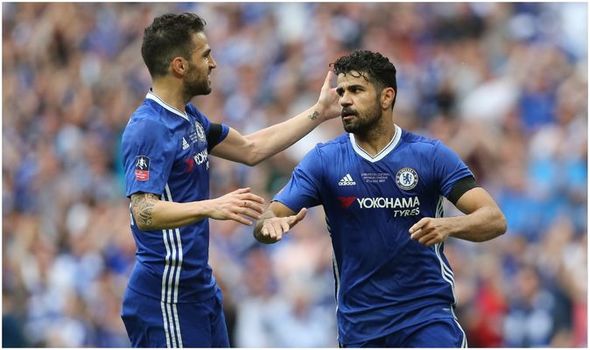 He replied: “The half volley one to Diego Costa away at Swansea that he missed… I’ll never forgive him for that one.”

It didn’t matter too much, however, because Chelsea secured a 5-0 win on the day, with Costa netting twice.

Fabregas’ reply to the answer left some Twitter users confused because Costa failed to convert.

One commented: “You’ve been asked about assist. How does that qualify as an assist?”

A second wrote: “How’s that an assist then?”

While a third said: “Cesc mate I don’t think that counts as an assist.”

“Diego Costa missed a lot of your fantastic passes,” joked one.

A second said: “@diegocosta will pretend not to see this.”

While another added: “Loool haha.”

He joined Monaco in January 2019 after falling out of favour under Maurizio Sarri.

Meanwhile, Fabregas has revealed why he never played for Manchester United following David Moyes’ admission that the Red Devils were trying to sign him.