Chelsea’s joy at an exhilarating attacking performance to dispatch Malmo 4-0 was quickly washed away by concern at the losses to injury of Romelu Lukaku and Timo Werner.

On a damp night at Stamford Bridge, Thomas Tuchel’s side looked to amend assumptions that his side are more efficient than breathtaking with Liverpool and Manchester City grabbing the headlines despite the Blues sitting pretty at the top of the Premier League table.

While the German’s ideas remain a work in progress in the final third, he can rely on one of his cornerstones for inspiration. Mason Mount, returning to the starting line-up after coming on as a substitute against Brentford, predictably sparked a thrilling opening to this Champions League group-stage game with his wasp-like movement. Mount dovetailed with N’Golo Kante, who was permitted to gallop forward in what became a fluid 3-4-2-1.

After a frustrating defeat against Juventus, who lured the Blues into their trap to snatch a 1-0 win last time out in Europe, Chelsea were in a hurry to exert their superiority over the Allsvenskan leaders and deliver a reminder to their rivals of their status as European champions.

Perhaps revelling in the adulation felt from the loudest chant from the Matthew Harding Stand ahead of kick-off, Thiago Silva gladly stepped out from the back at every opportunity with Veljko Birmancevic and Antonio Colak diligently marking Antonio Rudiger and Andreas Christensen. But the Brazilian resisted calls from the crowd to shoot after eight minutes, instead whipping in a delicious cross.

Christensen met it with force on the volley, with the ball skipping up off the turf and fizzing into the top right corner past a sprawling Johan Dahlin.

The Dane has truly come of age over the last 12 months, graduating to an elite class of centre-backs in Europe, but this was his first ever goal in Blue after 137 competitive appearances.

After witnessing the teething stages of a partnership between Timo Werner and Romelu Lukaku at Brentford, there was clear evidence here that the pair could blossom into a lethal combination.

As Malmo unravelled on the break, the German’s deft touch from deep, as if looking to hold a green with a pitching wedge, found Lukaku in behind. The Belgian wriggled free inside the box but was crudely hacked down by Lasse Nielsen, absorbing a heavy blow to his right ankle in the process.

What followed was a sweeping finish from the spot by Jorginho for his first of the season to double the advantage. But that joy was short-lived as focus switched to Lukaku, who hobbled back to the halfway line with a grimace before being replaced by Kai Havertz.

Chelsea’s hero in Porto, looking to snap a six-game drought since that exquisite header at Anfield, squandered a glorious chance moments after his entrance, with Dahlin’s strong hand at the near post denying his one-on-one opportunity and providing Malmo with some respite.

But another potentially devastating blow arrived as Werner followed Lukaku down the tunnel in what could spark a striker crisis in the coming weeks. 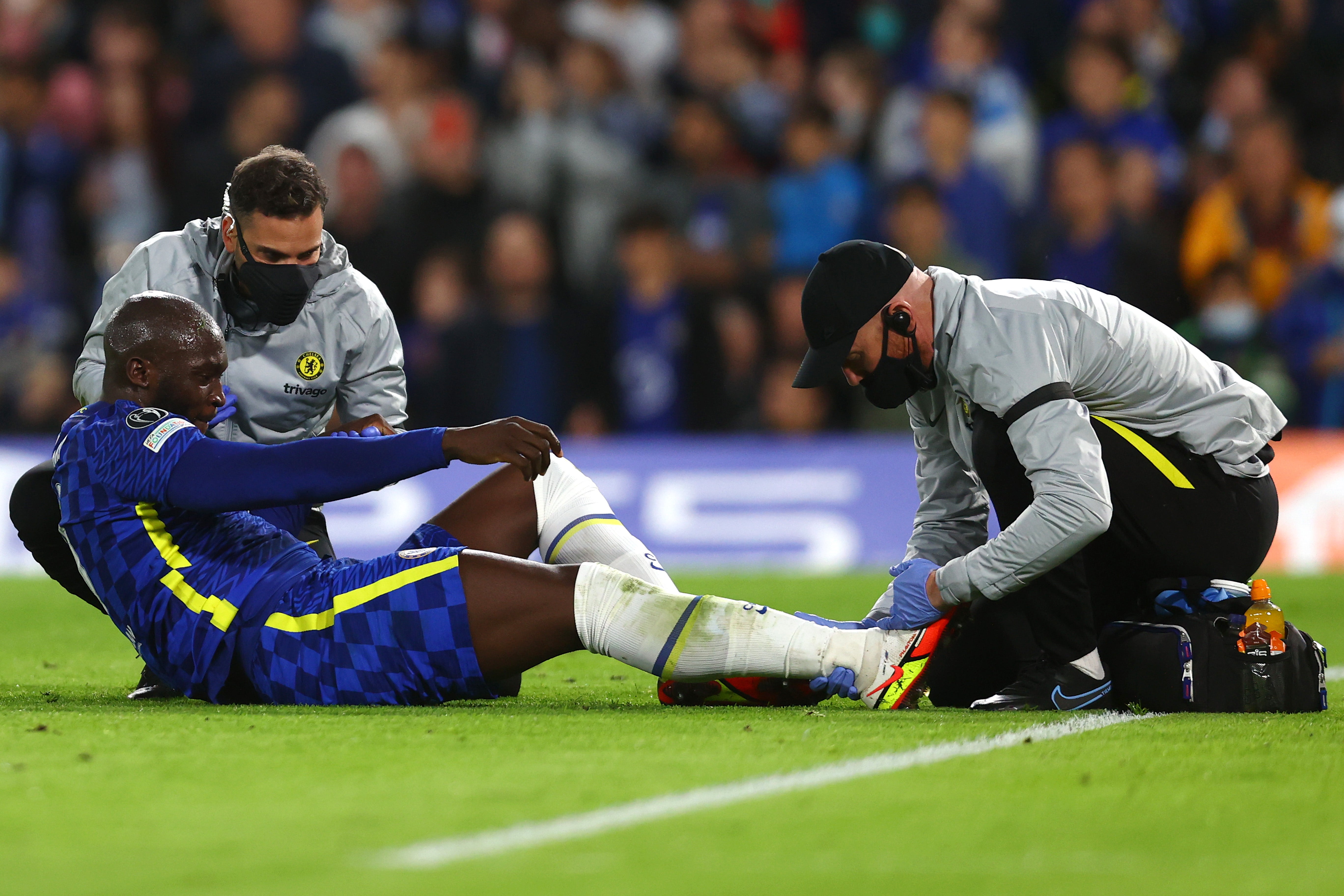 Romelu Lukaku receives treatment before being substituted in the first half

With the drizzle quickly turning into a sustained downpour, Chelsea’s tempo dropped, but they emerged re-energised after the break with substitute Callum Hudson-Odoi eager to impress.

Mostly cast aside by Tuchel after a promising run as a wing-back in the early stages of the German’s reign, Hudson-Odoi grasped his opportunity here, surging into the Malmo half following a breakdown in possession from the visitors.

The 20-year-old, who scored in the 3-0 victory over Malmo in the Europa League two years ago, then packaged together his pace and close control with a calm head, slipping in Havertz.

The German timed his run to perfection before scooping the ball over the outstretched legs of Ismael Diawara.

A fourth arrived before the hour mark after Eric Larsson desperately lunged in as Rudiger closed in on goal. A skip and a step and Jorginho repeated the trick to double his tally for the season and put the game beyond doubt.

But while there were elements of the slick attacking display Tuchel craves dearly, any delight at his side’s progress has been dashed for now with an impending striker conundrum.