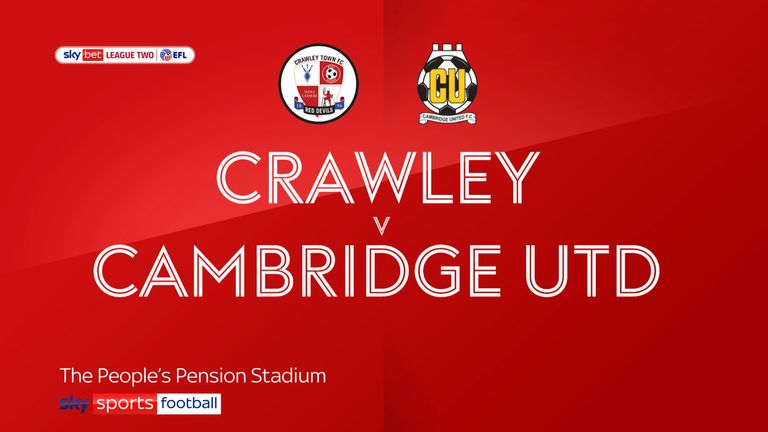 Goals either side of the break from Max Watters and Tom Nichols saw Crawley come from behind to beat high-riding Cambridge 2-1.

Joe Ironside headed the U’s into a third-minute lead, but a classy comeback ensured a fourth win in five home league games for the hosts.

John Yems’ side finished with 10 men when midfielder Jake Hesketh was shown a straight red card late on for a bad tackle on Kyle Knoyle.

Unchanged Crawley went into the clash having conceded only one goal in their previous four home league games.

But they suffered an early shock in only the third minute when Leon Davies crossed accurately for striker Ironside to head in his fifth goal of the season from six yards.

The Reds were then relieved to see a deflected shot from Luke Hannant go wide after Paul Mullin set up the chance.

Defender Tony Craig came to Crawley’s rescue by making a vital goal-line clearance after Mullin got on the end of a long ball from Jack Iredale.

The Reds posed more danger as the half continued and Watters levelled just before the break with a first-time shot following an assist by Nichols.

Cambridge made a fast start to the second half and Mullin was denied by keeper Glenn Morris before Ironside directed an Iredale cross narrowly over.

But the Reds went in front in the 56th minute when Nichols headed home his fourth goal of the season at the far post from Sam Matthews’ in-swinging corner.

Cambridge applied some late pressure and the nearest they came to an equaliser was when Greg Taylor headed against the bar.

Hesketh was given his marching orders in the 87th minute but Crawley held on.