Derek McInnes has left Aberdeen after eight years in charge at Pittodrie with chairman Dave Cormack maintaining it is the ‘right time’ to make a change.

McInnes departed after a run of just two wins in their last 10 matches which has left the Dons trailing third-placed Hibernian by three points in the Scottish Premiership.

In a statement the two parties intimated it was a mutual decision and Cormack said: ‘Derek and I reviewed where we were and agreed that this was the right time for him to step down.’ 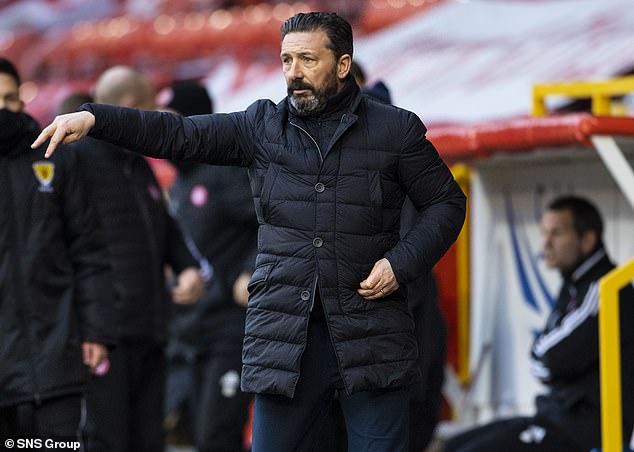 McInnes took over in 2013 and led the club to their first piece of silverware in two decades the following year when they beat Inverness on penalties to win the League Cup at Celtic Park.

He steered the Dons to four second-placed finishes and was almost lured away from Pittodrie, being strongly linked with his former club Rangers in 2017, and rejecting overtures from Sunderland in the same year.

But the club’s form began to nosedive and pressure mounted on McInnes after a run of poor displays culminating in last Saturday’s goalless home draw against Hamilton.

Cormack added: ‘During his time in charge Derek raised the bar and delivered a level of consistency not seen at the club for many years, qualifying for Europe each season and delivering a memorable Scottish League Cup win at Celtic Park.

‘Clearly, results since the turn of the year have been disappointing and frustrating for everyone.

‘The club now has the opportunity to appoint a new manager ahead of the new season where, with a number of players out of contract, we have work to do to build a competitive squad.’

McInnes’ assistant Tony Docherty will also depart with immediate effect and the Dons will be led through their remaining six league games by an interim team of Paul Sheerin, Barry Robson and Neil Simpson.

McInnes said: ‘This season has been unprecedented due to a number of factors and I am as frustrated as anyone that results haven’t been of the high standard which we set.

‘My motivation to deliver success has never wavered and during my eight-year tenure my staff and I have worked hard to elevate expectations and set a minimum standard which should be demanded at a club like Aberdeen FC.

‘I would like to thank all the players who have featured in my teams over the years, my current staff and players for their efforts and all the staff behind the scenes for their hard work and endeavour.

‘To the supporters for their continuous backing and, of course, the board for their support during my time at the club.’