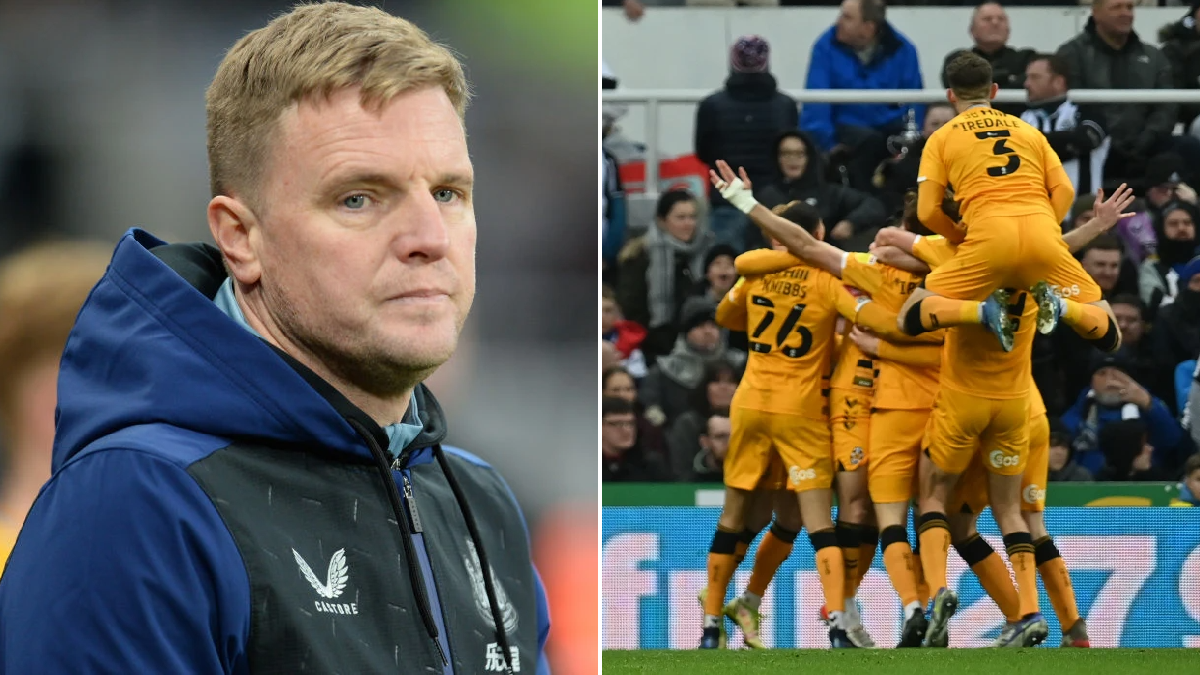 Newcastle manager Eddie Howe has defended his players’ attitude in Saturday’s shock FA Cup third-round defeat at home to League One side Cambridge and has urged the team to bounce back next time out.

The Magpies named a full-strength team at St James’ Park with new recruit Kieran Trippier handed his debut following his move from Atletico Madrid, with Howe having described the match as a must-win game beforehand.

Newcastle, who are 19th in the Premier League, had hoped to use the match to build momentum and install some confidence, but were ultimately dumped out of the competition in embarrassing fashion.

The home side dominated much of the match and twice thought they had netted only to be denied by offside calls before Joe Ironside gave the League One side a shock lead in the 56th minute.

In a frantic period of play, Fabian Schar cleared the ball off the line only for Ironside to swivel and fire the rebound into the back of the net before Cambridge – and goalkeeper Dimitar Mitrov in particular – produced a fantastic rear-guard display to preserve their lead.

The victory is Cambridge’s first ever away win against a top-flight side in the FA Cup and compounds Newcastle’s woes in what has been a miserable season, though Howe defended his side’s application and felt they were unlucky to go out.

He told BBC Sport: ‘We are desperately disappointed. We really prepared well for this game and we played a very strong team.

‘But ultimately we found a goalkeeper in superb form and a team that defended for their lives and we couldn’t break them down. I don’t think there was anything wrong with our attitude we just couldn’t deliver the quality to score.

‘The players are very disappointed. They know the importance of the FA Cup and they wanted to win. When we did get it right the goalkeeper was in outstanding form and I have to credit Cambridge and their manager.

‘We did have some good moments but we lacked that killer instinct that every team needs. Then when you don’t put the game to bed there’s always a chance you leave yourself open and, unfortunately, one of those moments cost us the game.

‘The size of the task remains what it is, I just hope the game doesn’t damage our players’ confidence. Coming into the game we were in a decent frame of mind and were boosted by the Manchester United performance. When you don’t win and achieve your objectives it has to force you into working even harder and that is what we will do.

‘I think we have been a little but unlucky today but you need a bit of luck to get to the final and win the FA Cup . It wasn’t our year and I’m disappointed for the supporters for the feeling and the noise they gave us today. I think they saw a team motivated today that gave their all but not good enough in the final third.

‘The next group of games could potentially be season-defining. Feeding the payers and giving them the confidence to execute is the challenge I face. It’s a good group of players with a good attitude but we have to take this defeat on the chin and come back again.’