Edinson Cavani’s sublime early strike and a late own goal eased Manchester United into the semi-finals of the Europa League, allowing Ole Gunnar Solskjaer to celebrate reaching the last four of a cup competition for the fifth time since taking charge at Old Trafford.

Now, it is about taking that next step, which will involve coming through a stiffer test than the one posed by Granada.

After a 2-0 win in Andalusia that was more comfortable than the scoreline suggested, this was cut from the same cloth. Ahead on the night after just six minutes and streets clear on aggregate, United could afford to shift down the gears and manage their way through the remainder of the evening.

Roma now stand between Solskjaer and United’s first final under his management, while either Arsenal or Villarreal could await in the Gdansk showpiece.

With a place in next season’s Champions League all but secured and a second-place Premier League finish behind Manchester City looking likely, there is no reason for Solskjaer not to focus the energy on a first piece of silverware from here.

To be fair to the United manager, he has rarely shown any desire to prioritise one competition over another and continued to treat these Thursday night engagements with a rare level of respect, despite being ahead by two away goals.

Aside from enforced absences through suspension and injury and the return of David de Gea in goal, this was as strong a line-up as possible, featuring Bruno Fernandes and led out by captain for the night Paul Pogba. That meant no place for Donny van de Beek, who has only made four starts since the turn of the year.

It felt a little like overkill. Granada’s story may be extraordinary, rising from Spain’s equivalent of the National League regional divisions to this first European campaign in their history, but there is a very ordinary team at the centre of it, mid-table in La Liga with a distinctly mediocre record. United did not need long to tighten their grip on the tie.

Pogba played his part, neatly flicking on Alex Telles’ cross from the left wing, but this goal was all about Cavani’s finish. Despite his advancing years, the 34-year-old has lost none of his natural technique and timed his volley of Pogba’s header to perfection, directing it into the bottom right-hand corner of Rui Silva’s goal in one clean motion.

Granada now needed four. Given that United were looking to extend a 16-game unbeaten home record in this competition, their chances were slim. And in any case, they had made the fatal error of playing in black shirts against Old Trafford’s newly blacked-out seat coverings. If United’s progression was not assured before kick-off, it was now.

Only injury or suspensions could spoil Solskjaer’s evening, but Pogba came perilously close to being sent off not long after the goal.

First, having shrugged off the attention of several Granada players during a forceful burst through midfield, he caught German Sanchez with an elbow. It did not appear intentional. If anything, he could argue he had been fouled by the players he had left in his wake. Yet to his annoyance, his name was in the book.

Fernandes’s pleas for Pogba to regain composure fell on deaf ears. Minutes later, a needlessly late challenge on Yangel Herrera, a Manchester City loanee, had him at risk of a second yellow. Fortunately, Roberto Soldado kicked up such a fuss about the challenge to referee Istvan Kovacs that he was the only one cautioned. Pogba could breathe again. 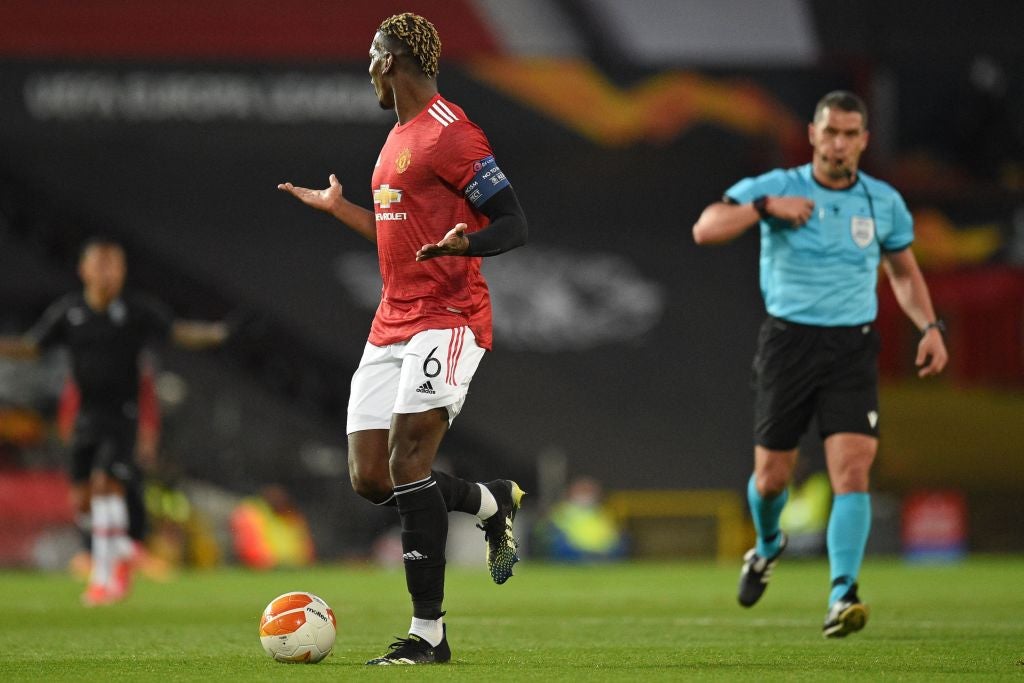 There really was no need for things to get heated. United were in control but Solskjaer made sure there would be no sour note to the evening by replacing Pogba at half time with Van de Beek. Taking this rare opportunity to impress with both hands, he quickly delivered a inch-perfect cross that the unmarked Mason Greenwood failed to convert.

Cavani went similarly close, glancing a Fernandes cross wide, then Van de Beek dragged a low shot off target. Granada came forward, playing for pride, but United were so comfortable that the most interesting aspect of the second half was the timing of the substitutions.

Solskjaer kept Fernandes on the field for 73 minutes in all, eventually introducing Juan Mata in his place for a rare run-out, and it was Mata’s attempt to meet a late header in the 90th minute which discombobulated Jesus Vallejo to put the icing on the cake. Distracted by his compatriot’s mistimed jump, the ball bounced off the defender and in.

It was slightly cruel on Granada, who had forced a fine point-blank save from De Gea seconds earlier in their best move of the night, but a fairer reflection of United’s dominance. Rome, and a far greater challenge, awaits.