Domagoj Bradaric’s stoppage-time strike dumped the Young Lions out just as they looked to have pulled off a stunning recovery.

Ebere Eze’s early penalty and a second goal from Curtis Jones – who was sent off after the final whistle – almost booked a last-eight tie with Spain in May.

The Young Lions, who had lost their opening two Group D games, needed to win by two goals and hope Portugal beat Switzerland. The Portuguese won 3-0 to top Group D but despite a much-improved display, Bradaric’s last-gasp drive sent Croatia through to the quarter-finals at England’s expense.

Jones and Dwight McNeil also hit the woodwork as England nearly completed their against-the-odds victory in Koper, but defeat and an early exit puts further pressure on Aidy Boothroyd’s position as manager.

They were without Tom Davies, Marc Guehi, Ben Godfrey and Emile Smith Rowe after they failed late fitness tests, while Callum Hudson-Odoi had already returned to Chelsea with a shoulder injury.

Knowing what was required to qualify, England started with more verve and intent than in their previous two games in Slovenia.

Jones – making his first start of the tournament – immediately offered extra energy and hit the crossbar from the edge of the area after a quick corner.

It was a sharp opening from the Young Lions and they were rewarded, controversially, by going ahead after 12 minutes. Eddie Nketiah went down under the challenge of Bartol Franjic in the box and, despite minimal contact, referee Harm Osmers pointed to the spot.

It was soft, but Eze sent Dominik Kotarski the wrong way to give England the perfect start.

Yet the Young Lions failed to immediately build on their advantage and Croatia slowly began to find their momentum, giving England their first scare after 32 minutes.

Croatia captain Nikola Moro skipped into the area and his low cross found Dario Spikic eight yards out, only for the midfielder to balloon over. Goalkeeper Aaron Ramsdale then spilled a routine strike from Luka Ivanusec before the Dinamo Zagreb youngster fired another warning shot eight minutes before the break.

Conor Gallagher and Japhet Tanganga played themselves into trouble and Ivanusec pounced to pinch the ball and burst towards the edge of the box. The midfielder only had Ramsdale to beat but the keeper produced a fine save to turn away his low drive. 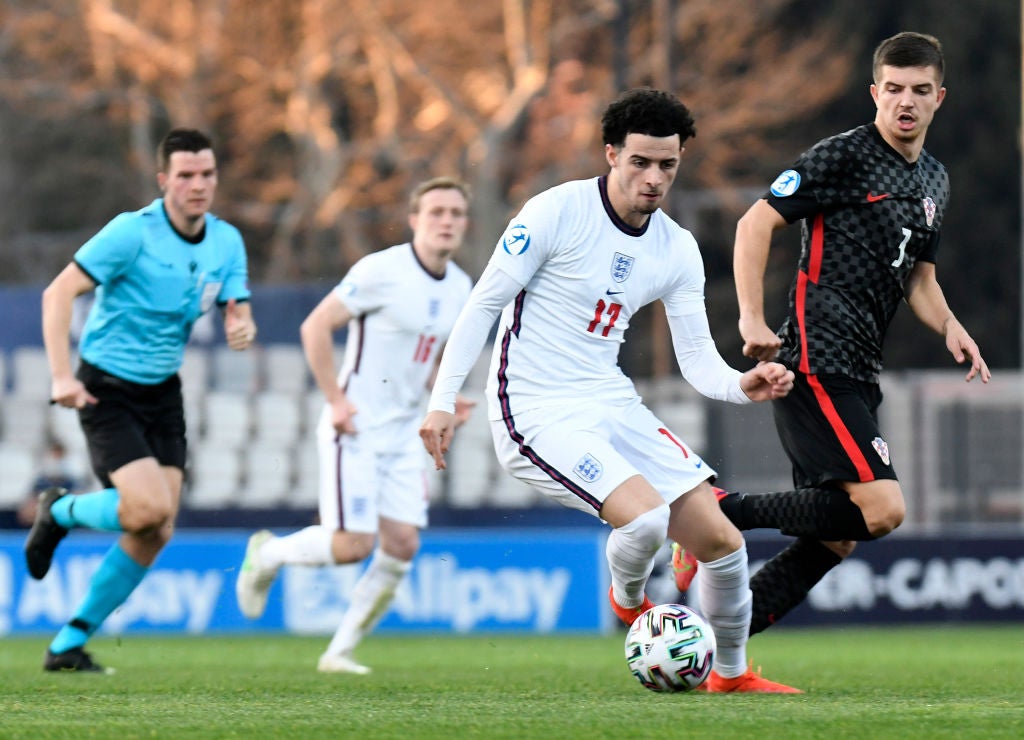 England thought they were heading through after Jones’ second-half goal

With Croatia the better side since going behind, although Jones flashed a shot wide just before half-time, Boothroyd’s side still had work to do and went for a killer second after the restart.

Igor Biscan’s men had demonstrated more control in the first half but Kotarski had to be alert to save Eze’s low free-kick after 50 minutes.

Jones’ effort deflected wide before Nketiah shot straight at Kotarski after being released by Eze. The Young Lions continued their push for a second and McNeil’s free-kick struck a post after 63 minutes.

But with 16 minutes left, Jones grabbed a second which so nearly sent England through.

Substitute Rhian Brewster crossed for McNeil to hold the ball up and find Jones, who lashed a low drive into the bottom corner from 15 yards.

Yet, just as it looked like the Young Lions had pulled off the two-goal win they needed, Bradaric rifled in from the edge of the area in the first minute of stoppage time.