John Stones reacts to his costly error against Poland

Seventy-three days. That’s how long Gareth Southgate now has to settle on his starting line-up for Croatia at Wembley, England’s first engagement of a European Championship that is only a couple of games shy of being a home tournament.

How close is he to knowing who plays? Southgate said at the start of this March camp that he had an idea of who will start against Croatia. He said the same in December too, before the draw for this World Cup qualifying stage.

Whether three straight wins against San Marino, Albania and now this gritty, piecemeal victory over Poland have changed that line-up in his head, only he and his inner circle know. These games have given us on the outside a much better idea of his thinking, though.

Three-at-the-back appears to be no more. The system produced a solid but unspectacular set of results in the autumn and clearly required refinement but was expected to return for this meeting with the 19th-ranked side in the world, as a test run for meetings against elite opposition.

Instead, Southgate stuck with the recent 4-2-3-1 and not because of Robert Lewandowski’s absence. He stuck with 4-2-3-1 because, he told ITV, it suits the group of players currently at his disposal.

Of course, there are still a lot of other players to come back, join that group and potentially challenge for a place, which means few of the starting line-up against Poland can rest on their laurels.

Jadon Sancho, Marcus Rashford, Jordan Henderson, Jack Grealish and Jordan Pickford will all hope to play on their return. If Trent Alexander-Arnold can force his way back into Southgate’s thinking, he will have a chance of breaking into the XI.

Yet the worry for those absent players will be that, in several positions, the Euros team is starting to take shape.

Kyle Walker has regained Southgate’s trust since his silly sending off in Iceland back in September and started against the two most testing opponents during this camp.

Ben Chilwell returned to the line-up against Poland despite Luke Shaw’s impressive display against Albania, with the Chelsea full-back perhaps reasserting how important he has been to Southgate’s set-up since the World Cup. 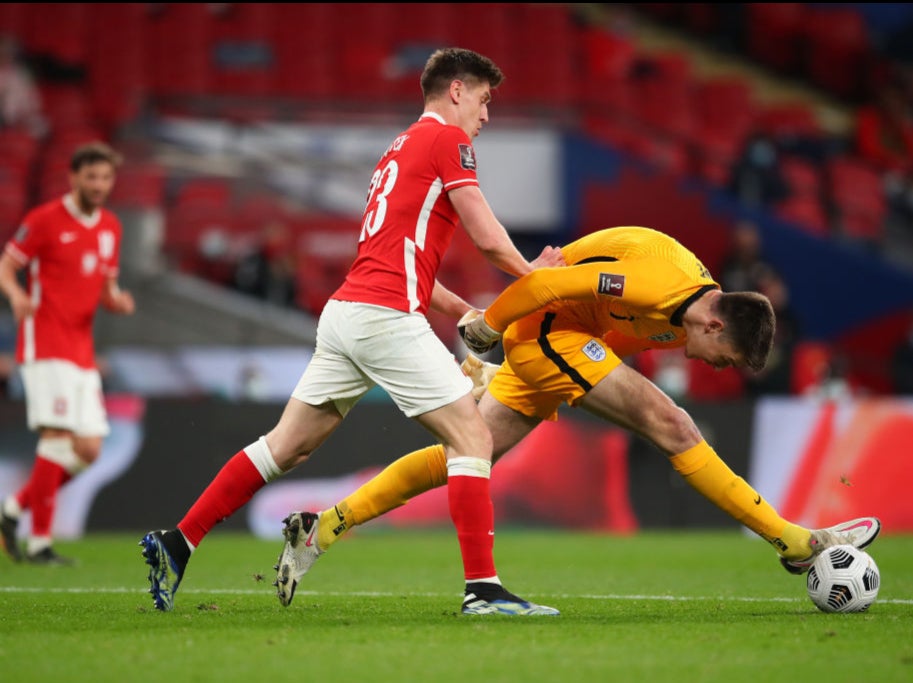 Nick Pope stretches to clear the ball against Poland

Declan Rice is among the first name on the team sheet now, while Kalvin Phillips was one of five players to start all three of these games.

Whether he is simply a placeholder for Henderson in this line-up or not, his spot in the final squad looks increasingly assured while the Liverpool captain’s fitness is becoming something of a doubt.

There were plenty of doubts about Mason Mount’s involvement only a few months ago but all doubters now appear to be believers.

There were even some who questioned whether Raheem Sterling was worthy of a nailed-on starting place. His first-half performance full of direct running at a petrified Polish defence was a reminder that though blessed with talent, this generation of English players has no forwards yet at his level.

Deciding between one of Sancho, Grealish, Rashford or Phil Foden – impressive in the second half of this win – is the clichéd ‘nice headache to have’ and will not cause Southgate too many sleepless nights. Those who do not start will be impact players, suited to different in-game situations.

It was the last thing that John Stones would have wanted to happen at the end of his otherwise successful return to the England set-up: a moment’s hesitation on the ball that may put doubt in Southgate’s mind over his place at the Euros.

After all, his dawdling on the ball was strangely similar to his mistake in Guimaraes two summers ago which cost England dearly in the Nations League semi-final against the Netherlands. Just as Memphis Depay stole the ball off Stones’ toes that night, Jakub Moder did the same, before exchanging a one-two with Krzysztof Piatek and scoring.

That error against the Netherlands eventually led to Stones’ long spell away from the international fold, but to his credit, he used them over the subsequent months as motivation to return. This time, his response was much more immediate, as he knocked down the late corner to set up Maguire’s winning goal.

But Stones was not the only one to blame for Moder’s equaliser. The Manchester City defender would not have been put in the position to give away the ball if not for Nick Pope’s awkward pass drawing closer to his own goal.

Pope started all three of these games and conceded just once, though from the only shot on target which he faced. More worryingly, he looked uncomfortable against both Albania and Poland when asked to play out from the back.

It is the Burnley goalkeeper’s biggest limitation and one that could cost him a starting place despite his commanding presence, composure when coming for crosses and generally good shot-stopping ability. Doubts remain about Jordan Pickford in all those areas, but he is better with his feet than any of his other rivals for the No 1 spot.

Slowly, Southgate’s starting line-up for Croatia is coming together and these last three games have given us a better understanding of who is likely to be part of it. Yet as the worst moments of this win over Poland demonstrated, there are still several issues that need ironing out over the next 73 days.