Edinson Cavani and Anthony Martial struck late to send Manchester United into the semi-finals of the Carabao Cup, as they won 2-0 at Everton.

Cavani – who may have been a little lucky to be on the pitch at that point after a clash with Yerry Mina early in the second half – found the bottom corner in the 88th minute to break the deadlock in their quarter-final clash on Wednesday night, while substitute Martial sealed the win with the last kick of the game at Goodison Park.

It leaves Ole Gunnar Solskjaer still in the hunt for his first piece of silverware as United boss, while Carlo Ancelotti, who had taken this competition seriously in an effort to end Everton’s 25-year trophy drought, will have been left extremely frustrated.

For the second year in a row, United will face Manchester City in the semi-finals of the competition. They were knocked out by Pep Guardiola’s side over two legs at the same stage last season, but on this occasion they will welcome their rivals to Old Trafford for a one-off tie in the first week of January. 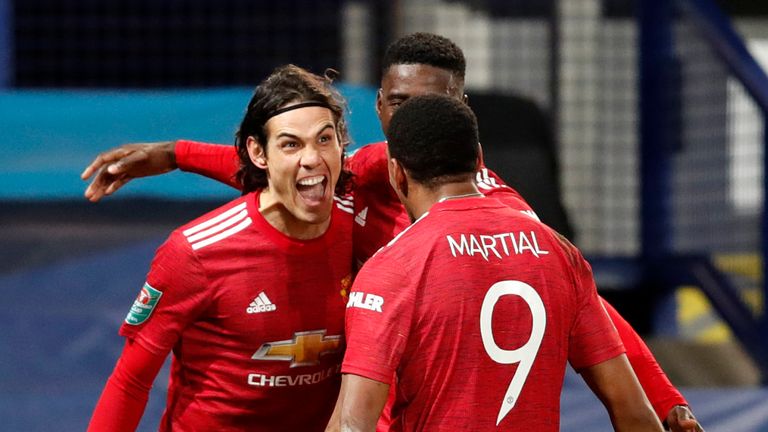 United made more changes to their line-up, with nine in total to Everton’s three, but that didn’t seem to impact upon their rhythm as they dominated the opening half an hour. While they may not have created any genuine clear-cut chances, they still had decent opportunities to score.

Cavani had a volley at the far post that was saved, Mason Greenwood glanced a header just wide after a dynamic one-two with Alex Telles, and Paul Pogba perhaps should have done better with a header from a corner, but maybe did not have enough time to react to the ball coming his way as he nodded it right into the arms of Robin Olsen.

After an extremely poor opening, Everton improved in the final stages of the half. They had what was also, perhaps, the best opportunity to score as they won a free-kick on the edge of United’s box, but Gylfi Sigurdsson’s curling effort was palmed over the bar by Dean Henderson. 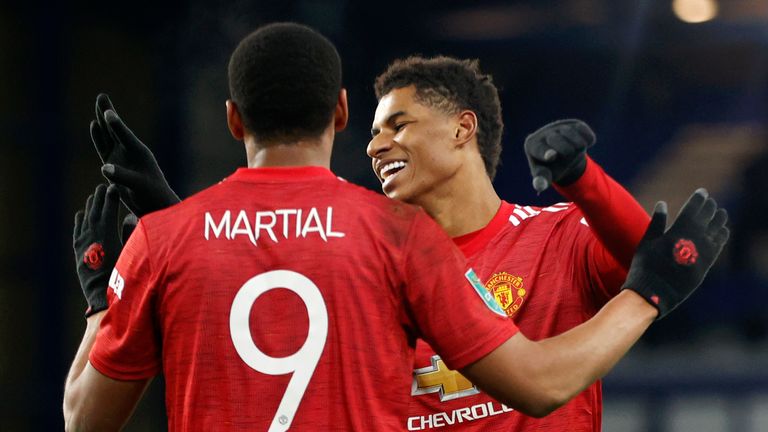 Man of the match: Edinson Cavani

While the first half was lively, the second lacked any kind of quality. The main incidents came off the ball. On 53 minutes there was as a strange coming-together between Cavani and Yerry Mina – which saw the United striker appear to grab the lower part of the defender’s face and push him to the floor – but the referee opted to take no action, and there was no VAR to refer to at this stage of the competition.

Then a couple of minutes later a clash between the leg of the jumping Eric Bailly and the head of Richarlison saw the Brazilian forced off.

Richarlison later allayed fears he had sustained a serious injury and described the incident as “something that happens in the game”.

“To everyone who sent a message and worried, I’m fine,” he wrote on Twitter.

“It was more the scare and the image that was ugly. Bailly apologized to me later and everything is fine. Something that happens in the game. Thank you for your affection and concern.”

Solskjaer then sent on Marcus Rashford and Martial in search of a winner, and it was the latter who teed up Cavani for the all-important opener two minutes from time, slipping a perfectly-weighted pass into his path that the Uruguayan took in his stride before bending home from the edge of the area.

As Everton committed bodies forward in search of an equaliser, United countered and Martial sealed the victory in the sixth minute of stoppage time, calmly slotting past Olsen after being played in by Rashford.

Everton’s Carlo Ancelotti: “We did enough to win. It was a good performance and we needed to defend, which we did well. We had a difficult start but after 20 minutes the game was under control – we didn’t play enough attacking football but we had to defend and until the last 20 minutes we did that well.

“We did have some opportunities on the counter-attack but that was the game that we planned. We left the position in midfield open too much, and Cavani’s quality showed and he scored a fantastic goal.

“We are disappointed, but we don’t need to have regrets because the team performed well, sacrificed and worked hard. Yes, we lost, but we look forward to the next game.”

Manchester United’s Ole Gunnar Solskjaer: “You never know what will happen in football, the first goal always changes games. As long as we were in the game I knew my substitutes could come on and make an impact. Luke [Shaw] has strength and power down the side so we tried to swap the dynamics of the game.

“We had a very good start and were excellent in the first 20-25 minutes, and should have been two or three goals up. They made a few good saves, and then we had a good spell just before half-time.

“Cavani should’ve scored three in the first half but he is a top striker with movement and quality, and the goal was excellent. There was nothing in [the incident with Mina]. It was two South Americans that have had a few battles before, they met in Copa America qualifiers. This was a proper game of football. With fans, tackles, yellow cards and chances at both ends, I enjoyed it.

“We know that when we defend well we have players to win us the game. The spirit in the camp is good, winning gives energy and gives you a boost so we head into Boxing Day positive.”

Man of the match – Edinson Cavani

It was a lively game at Goodison Park, but one in the midst of a long slog of games that was crying out for a moment of quality. It was Cavani who provided it, with a lethal finish to settle the tie. Question marks were raised over his signing in September, even on a free, but he is more than proving his worth for Solskjaer and United.

Both sides are back in Premier League action on Boxing Day. Manchester United head to Leicester City for a 12.30pm kick-off, while Everton head to Sheffield United for an 8pm clash.