Everton's £500m mistake: The scale of transfer disasters under Moshiri

Everton have burned through a staggering £500MILLION sum of transfer fees – plus FIVE managers – during the Farhad Moshiri era… so, can Rafael Benitez be the man who finally uses his money wisely?

For all the talk of clubs spending big, Everton’s transfer dealings sometimes go slightly under the radar in comparison to those of Arsenal, the Manchester clubs or Merseyside neighbours Liverpool.

The arrival of Farhad Moshiri as owner in February 2016 saw the replacement of Roberto Martinez with Ronald Koeman and record amounts of cash thrown at the team in pursuit of success.

Martinez had come off the back of two underwhelming 11th-placed league finishes, with the biggest shining light coming in the form of Romelu Lukaku’s goals following the Belgian’s club-record £28million move from Chelsea in 2014 following a very fruitful loan campaign at Goodison Park. 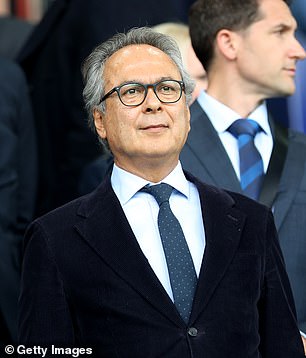 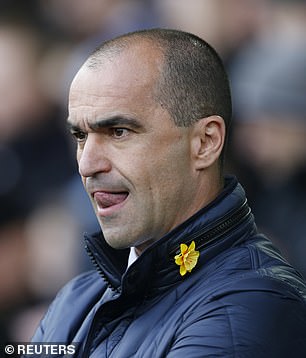 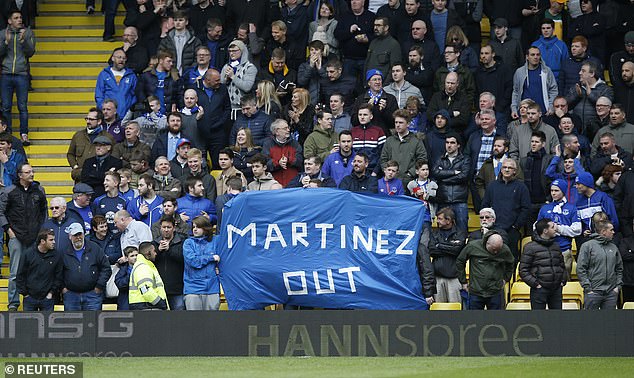 However, mid-table mediocrity for the second straight season meant Martinez was sacked

Moshiri was not shy about setting his sights high as he let Martinez know that Champions League football is what he should strive for, while the Monaco-based businessman planned for a director of football to turn the side from mid-table also-rans to one of the Premier League’s big hitters.

The man who filled that director of football role that summer was Steve Walsh, who had moved from Leicester City, where he had scouted the likes of Jamie Vardy, Riyad Mahrez and N’Golo Kante.

The bargain trio, under the stewardship of Claudio Ranieri, helped guide the Foxes to the most improbable title triumph of all time as the Midlands outfit stunned England with an exciting, counter-attacking style.

The move was seen as a coup by the club and after Walsh’s arrival they spent over £80million in their first campaign – a club record – on Idrissa Gueye, Ashley Williams, Yannick Bolasie, Dominic Calvert-Lewin, Ademola Lookman and Morgan Schneiderlin.

Of those, only Calvert-Lewin is still at the club, with the Sheffield-born striker’s career blossoming once Carlo Ancelotti joined in December 2019.

A succession of injuries and poor form meant £24m Schneiderlin’s attempt to revive his career under his old Southampton boss following a terrible spell at Manchester United did not go as planned. 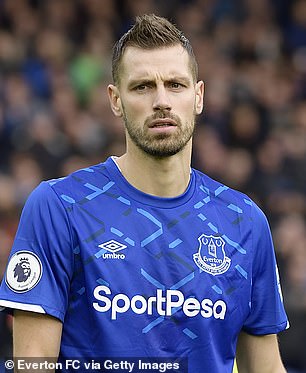 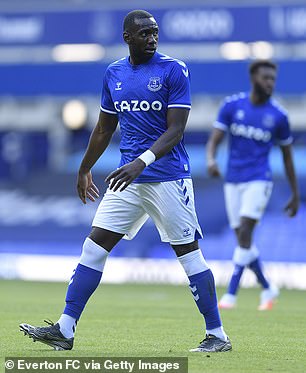 Morgan Schneiderlin (left) struggled as he tried to revive his career under ex-boss Ronald Koeman; Yannick Bolasie (right) wasn’t able to build up a run of games and is now in Turkey

The £30m shelled out on the skilful but inconsistent Bolasie, meanwhile, yielded just 32 appearances, two goals and four assists – in part due to a serious knee injury that kept him out for a year – before a series of loan moves then led to a permanent transfer to Turkey this summer after his contract expired.

Lookman wasn’t able to live up to the promise that he showed when he netted on his debut as a teenager in a 4-0 win over Manchester City in January 2017.

Having shone in a Swansea side that punched above their weight, £9m Williams continued to impress during his first season in the North West.

However, the following term saw Everton let in 58 goals – with only four sides posting a worse record. The Wales international subsequently joined Bristol City after being released.

Only Gueye could be considered a success alongside the £1.5m Calvert-Lewin, but the talented midfielder was tempted away from England by an offer from Paris Saint-Germain in 2019 just after winning the club’s Players’ Player of the Season award along with Lucas Digne. Gueye joined the French giants for £30m – a rare handsome profit.

The 2016-17 season saw a seventh-place finish, which was a marked improvement on the previous two years and something resembling the fifth place that Martinez secured in 2014 that had the club dreaming of regular European football. 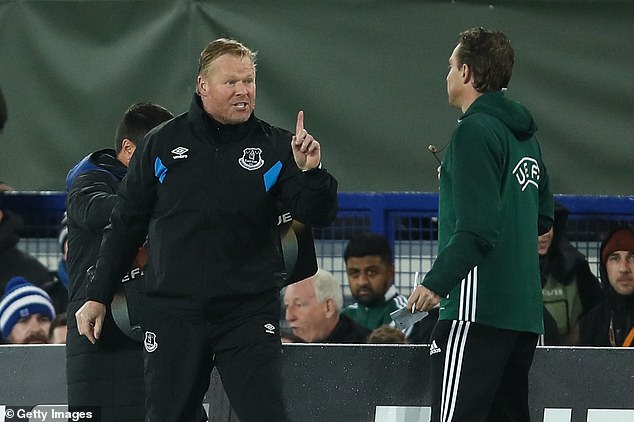 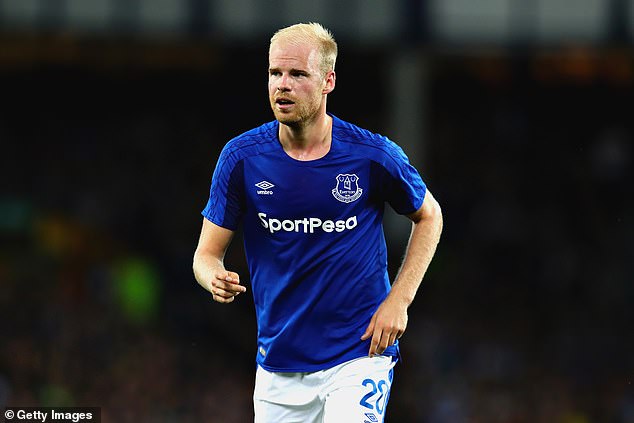 Davy Klaassen failed to score and left after a season having been bought for £23.6million 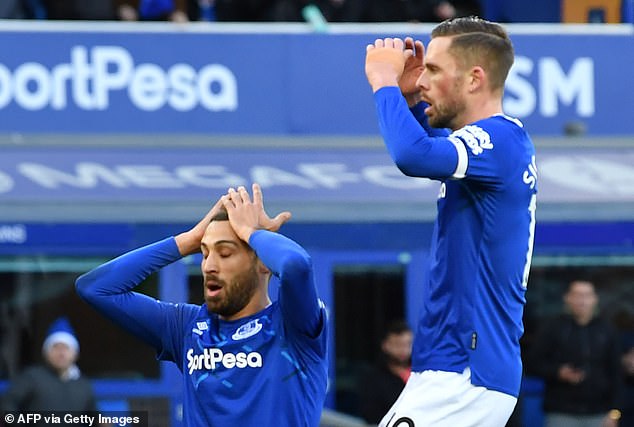 If the previous season had seemed excessive in spending terms, 2017-18 was going to provide a whole new definition for the word as the team stagnated, finishing eighth and crashing out of the Europa League at the group stage as both Koeman and his replacement Sam Allardyce were relieved of their duties.

Koeman lamented that the loss of Lukaku and the failure to replace him with Olivier Giroud cost him his job, with other mainstays like Ross Barkley and Gareth Barry also leaving that summer.

Vlasic moved from Hajduk Split before joining CSKA Moscow for £14m in 2019 having scored just two goals in all competitions.

Much as Arsenal fans were frustrated and thrilled in equal measure by Walcott’s displays, the Everton faithful rarely got to see the winger perform well on a regular basis as he produced just 11 goals and nine assists in 85 games.

Klaassen failed to score in 16 games before leaving for Werder Bremen for barely half his previous fee, while Tosun’s time in England has been ravaged by two major knee injuries, the latest of which still keeping him on the sidelines since April.

Keane and Pickford’s careers are harder to judge. Both men have featured regularly since arriving in the summer of 2017, but the pair have each experienced significant spells of poor form, while Everton finished in the bottom half of the table on goals conceded during two seasons (2017-18 and 2019-20). 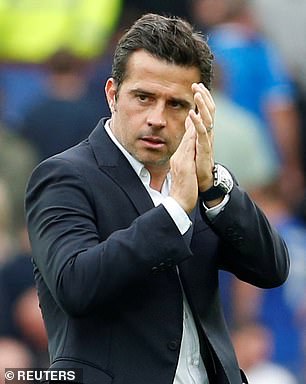 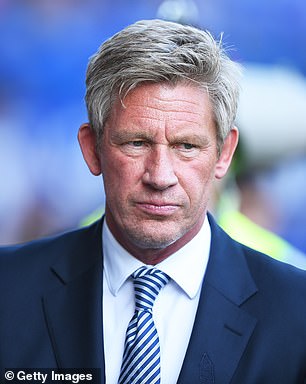 Marco Silva’s (left) arrival at Goodison heralded a move towards younger players; there was also a change in the director of football role as Marcel Brands (right) replaced Steve Walsh 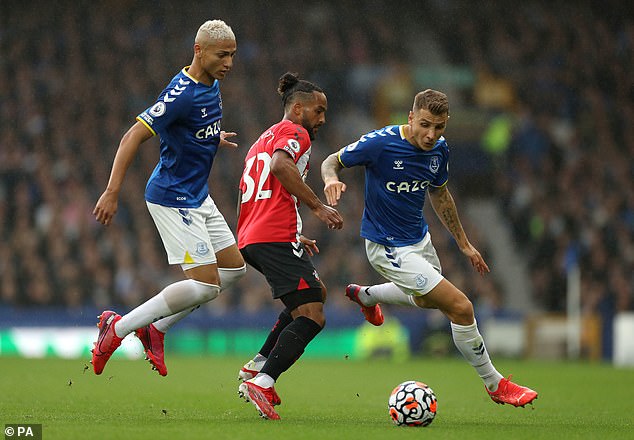 Despite a standout 2018-19 in which he scored 13 league goals, assisted a further six and played in every game, Sigurdsson, like Williams, has failed to hit the heights he reached at Swansea.

The summer of 2018 could be looked on as Everton’s most successful, with Marcel Brands succeeding Walsh after a torrid summer as Marco Silva took the reins, with the Dutchman sharpening the club’s transfer approach and focusing on youth as they spent a mere £90m on Richarlison, Yerry Mina and Digne.

Richarlison finished joint-top scorer in his first two seasons and although his output dropped last season, his link-up play and work rate mean he has a good chance of returning to double figures for goals under Rafael Benitez.

Digne has established himself as the club’s first-choice left back and has arguably been the most consistent performer since his arrival, while Mina has been in and out of the side.

However, another eighth-place finish was disappointing and so another flurry of spending began.

The summer of 2019 saw an increase in the number of arrivals, including the purchases of Fabian Delph for £10m, Andre Gomes for £22m, Jean-Philippe Gbamin for £25m, Moise Kean for £27.5m and Alex Iwobi for £35m. 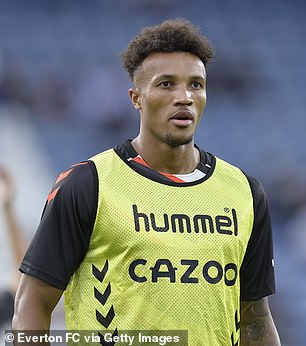 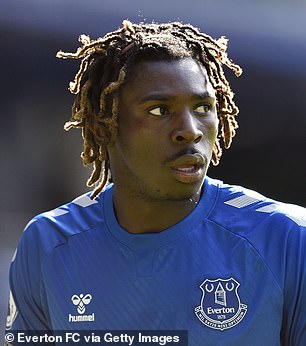 Jean Philippe-Gbamin (left) has only played four games for Everton after awful injuries; Moise Kean (right) struggled to adjust to the Premier League and has already returned to Juventus

Kean arrived on Merseyside as a raw but hugely exciting teenager. However, after just two goals in 32 Premier League games, he returned to Juventus, with a prolific loan spell at Paris Saint-Germain underlining that he has the ability to net regularly on the continent.

Through no fault of his own, Gbamin’s time in England hasn’t got going, with a debilitating thigh problem sustained that was only supposed to keep him out for eight weeks until October 2019, before surgery then pushed that return date back to January 2020 and additional surgery then ruled him out for another few months.

He then suffered an Achilles tendon injury during training in May as he prepared to return to full fitness, ruling him out until November.

That return was pushed back until April this year, but unfortunately, Gbamin suffered another knee injury which ruled him out for the rest of the campaign, although he has since returned to make his first start in two years in the EFL Cup away at Huddersfield.

Gomes’ time in England has also been punctuated by injury after a challenge by Son Heung-min in November 2019 caused a fractured dislocation of the Portuguese midfielder’s right ankle.

He remarkably returned to action three months later, but it was understood that the rest of that season would serve the midfielder in getting back up to speed.

However, Silva and his successor Ancelotti chose to only start Gomes 17 times from the start in the league, with the 28-year-old coming off the bench on 11 occasions and struggling to produce consistently. 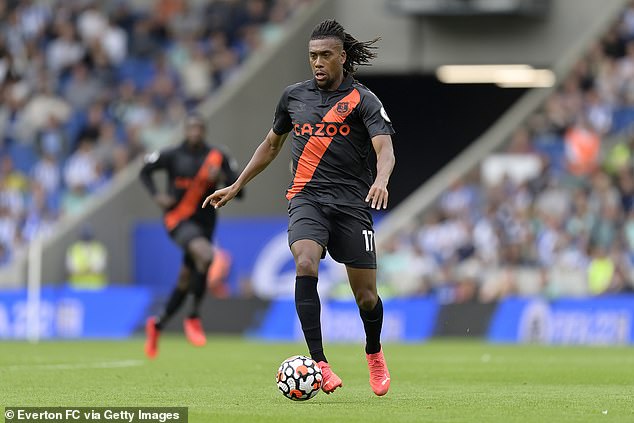 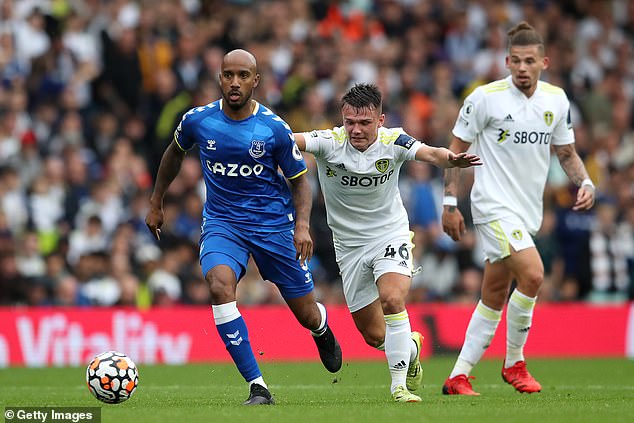 In what is becoming a theme, Delph has similarly struggled to get a run of games due to injury, with hamstring and calf problems hampering the former Premier League winner’s career in recent seasons.

Iwobi is an energetic presence on the wing but his goal and assist numbers were modest for Arsenal, registering three league goals each season from 2016 to 2019 and producing five, five and seven assists respectively in that time.

Those numbers have dipped significantly for his current club, with just one league goal in each of his two full campaigns so far and as many assists in that time period, with another coming against Southampton on the opening day of this season.

A terrible first half of the season saw Everton plummet to 18th, meaning Silva had to go. The death knell proved to be a resounding 5-2 defeat to Liverpool in early December, so the Goodison faithful would have been pleasantly surprised with the appointment of someone of Ancelotti’s calibre.

The pressure was somewhat off the Italian as far as league position was concerned when he was parachuted in a few weeks after Silva’s sacking. He ended up unlocking Calvert-Lewin’s top-flight goalscoring potential and taking the team to 12th – clearly room for improvement, but far from disastrous given the start.

A full season under the former AC Milan boss’ guidance was sure to have the fans dreaming of Europe, many thought. 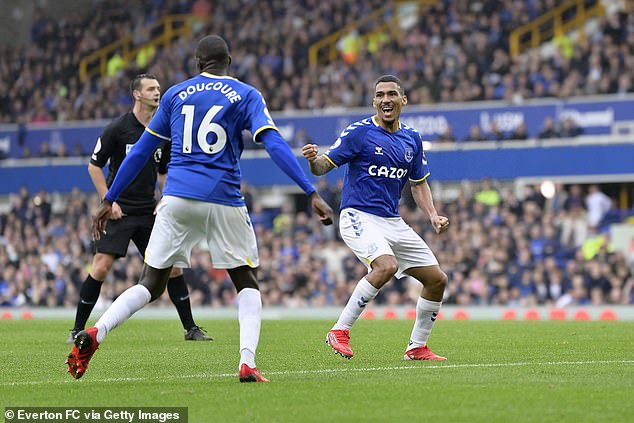 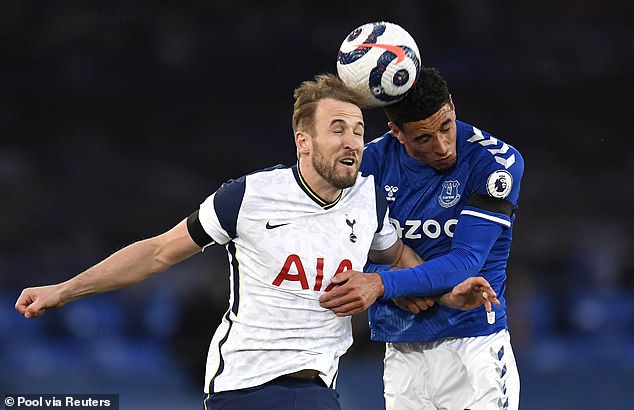 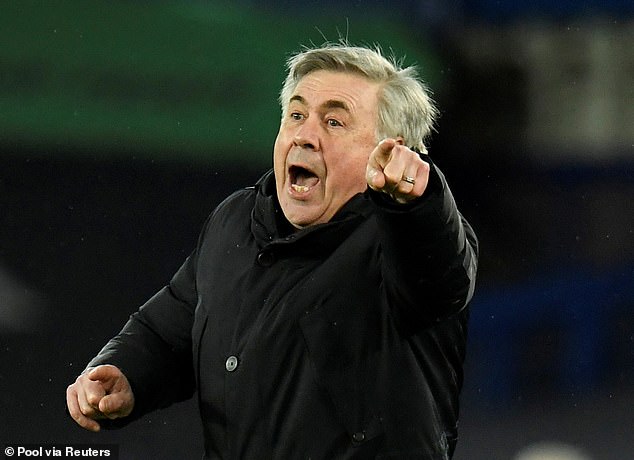 Three more £20m-plus buys arrived in the form of Abdoulaye Doucoure, Allan and Ben Godfrey from Watford, Napoli and Norwich, along with the exciting capture of James Rodriguez on what would emerge as a free transfer.

Four wins from four, featuring 12 goals scored and James pulling the strings, had many believing that Everton could upset the applecart and push for a top-four spot.

However, a humbling run of one win from seven highlighted the task on Ancelotti’s hands and, although four straight victories followed, that then preceded more patchy form that was characteristic of the rest of the campaign.

Home losses to Newcastle, Fulham and Sheffield United laid bare Everton’s sloppiness on their own patch, with the team only securing a top-half finish with one game to spare before a 5-0 hammering at Manchester City.

Godfrey’s confidence, poise and strength in his debut campaign on Merseyside were enough to earn him a call-up to the provisional England Euro 2020 squad, while Doucoure and Allan largely impressed.

And yet, an overreliance on Calvert-Lewin and some sloppy defensive errors meant they finished 10th. 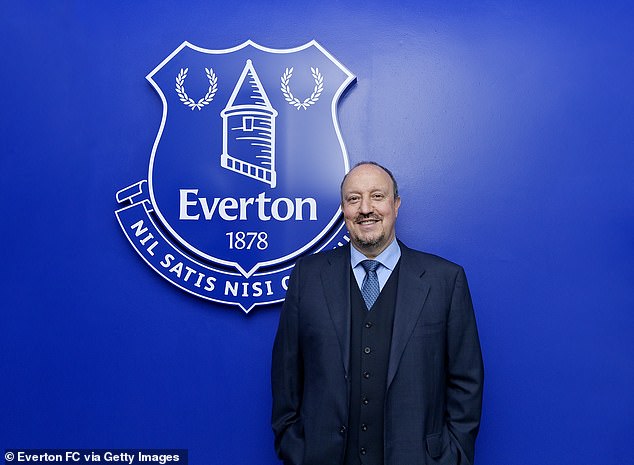 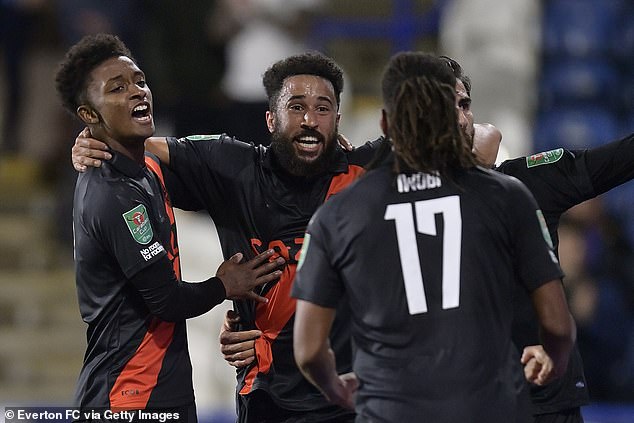 Ancelotti’s unexpected return to Real Madrid paved the way for the deeply controversial appointment of Benitez, but with Covid-19 severely squeezing many clubs’ budgets even in the Premier League, the prudence they have had to show may have allowed them to hone in on some bargains.

Demarai Gray is champing at the bit after just six months at Bayer Leverkusen, having been largely confined to the bench at Leicester, and already has two Premier League strikes to his name in royal blue.

He is the most expensive purchase at just £1.7m, with Andros Townsend, Asmir Begovic and Salomon Rondon all with notable Premier League pedigree and arriving on free transfers, along with ex-Liverpool stopper Andy Lonergan.

Two wins and a draw has Everton sixth before the international break interruption and while it is too early to draw definitive conclusions, Brands and Moshiri may be starting to wonder whether the secret to success may lie in familiarity rather than experimentation under the man who earned legendary status on the other side of Stanley Park.

After spending more £500m and burning through five managers, have they finally found their man?