Football lawmakers have confirmed that the Football Association has been given “full details” on concussion substitute trials that English football’s governing body needs to begin implementing the new protocol.

In December, the International Football Association Board (IFAB) approved the introduction of permanent concussion substitutes on an initial trial basis from January.

Many high-profile dementia diagnoses in the game have increased calls for the move which aims to help safeguard against head injuries sustained during games.

Premier League clubs voted against allowing teams to make five substitutions per match for a third time at a shareholders’ meeting in December but voted in principle to introduce permanent concussion substitutions.

Teams will be able to use up to two additional replacements per game if players are suspecting of sustaining, or diagnosed with, a concussion.

A statement from IFAB read: “We can confirm that since the decision to start the trial on concussion substitutes made on 16. December 2020, The IFAB, FIFA, and a number of interested competitions have been working on ensuring that the start of the trial can be facilitated ASAP [as soon as possible].

“While the two protocols were approved and published on 18. December 2020, some details on implementation procedures and logistics needed to be considered.

“The FA received the full trial details earlier this week and is now planning on the start of the trials.” 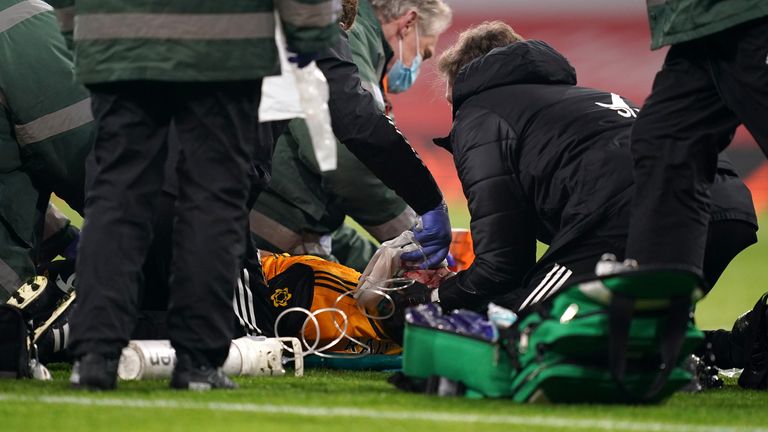 FIFA has also said the use of an additional permanent concussion substitute will be trialled at the Club World Cup.

The breakthrough has come after Wolves striker Raul Jimenez suffered a fractured skull during a clash of heads with Arsenal’s David Luiz during the two teams’ game at the Emirates Stadium in November, which will likely see him sidelined for the majority of the season.

His manager Nuno Espirito Santo later described the injury as “traumatic for everyone” at the Molineux club.

Meanwhile, the daughter of former England and West Brom forward Jeff Astle, who died of dementia in 2002, has told Sky Sports News how she is set to work for the Professional Footballers’ Association (PFA) as a special advisor on the illness.