Manchester: Phil Foden enhanced his growing reputation with a superb individual goal to give Manchester City a 1-0 win over Brighton on Wednesday, becoming his team’s top scorer in the Premier League this season in the process.

Foden took a touch from Kevin De Bruyne’s pass to cut inside Brighton defender Adam Webster, before lashing a low, right-foot shot just inside the post from the edge of the area in the 44th minute. 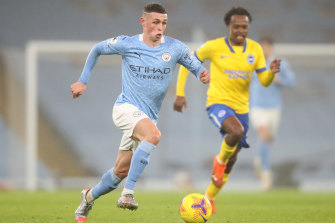 It was his eighth goal in 22 appearances for City this season, a team-high five of those coming in the league. With four goals in his last six games, Foden has been City’s shining light of late after finally getting a run of games under manager Pep Guardiola.

City toiled at times against Brighton, especially in the final 30 minutes when the visitors pushed more players forward, but had plenty of chances to win the game by a much bigger margin. 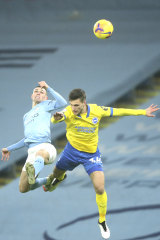 Foden has made the most of a recent run of game time under City manager Pep Guardiola.Credit:Getty

Not least when De Bruyne won a penalty in stoppage time after being brought down by Brighton goalkeeper Robert Sanchez, only for substitute Raheem Sterling to fire his spot kick over the crossbar.

Still, Foden’s goal was enough to lift City above Leicester and Everton into the top four, with Guardiola’s side four points behind leaders Manchester United but with a game in hand.

The 20-year-old Foden struggled for starts in the opening months of the season, especially in the league, but has now made the line-up for City’s last four games in all competitions and is showing just why he is rated among the top talents not just in England but across Europe as well.

He ran into trouble off the field this season, though, when he was dropped from the England squad — along with another youngster in Manchester United striker Mason Greenwood — for breaching coronavirus restrictions by meeting women from outside the team’s bio-secure bubble after a match against Iceland.

He will be eased back into the England team — national team manager Gareth Southgate was at Etihad Stadium for the match against Brighton and cannot have failed to be impressed — but looks to have established himself in City’s best side.

City’s much-improved defence made it four clean sheets in its last five games, with the only goal conceded coming in the final seconds of the 3-1 win at Chelsea. Guardiola's side backed up that win with a 2-0 League Cup semi-final victory over United and a routine 3-0 FA Cup dispatching of Birmingham.