Frank Lampard is encouraged by the revival of British managers in the Premier League and hopes the current crop can inspire a future generation of coaches.

The Chelsea boss is one of 11 British head coaches and managers in the top flight, a number that has increased from just five only two years ago.

Lampard believes the increase can have a positive impact on those aspiring for a career in management and encourage players nearing retirement to consider a move into coaching.

“In the modern world, I don’t think it matters where you’re from,” Lampard said.

“But it is nice that this is the Premier League here in England and we are seeing some British managers coming through and doing very well.

“I know there will be a lot of hard work behind that. And if that can inspire younger managers, or players who want to try to become managers, that is a great thing. Sam Allardyce and David Moyes have been doing well for years.” Lampard has himself been part of that revival having taken the Chelsea job in 2019, while other experienced bosses like his West Ham counterpart Moyes and West Brom’s Allardyce have returned to the league.

As his Chelsea side prepare to face West Ham and look to make amends for back-to-back away defeats to Everton and Wolves, Lampard was complimentary of the job Moyes has done.

“What he’s doing at West Ham is the job of a top manager. The observations of others who think he needs to redeem himself don’t matter. I don’t see it that way. There’s nothing for him to redeem.”

Lampard says there are no regrets at Chelsea over the decision to release West Ham midfielder Declan Rice as a teenager.

Rice was let go from the Blues academy as a 14-year-old and moved to West Ham, where he has since become a key player and earned international honours with England.

“He’s a fantastic player for West Ham and England so fair play, because his journey there after leaving Chelsea and going to West Ham is a good story to hear,” he said.

“There are lots of stories like that and it shows the player’s strength of character. In terms of from our end, I certainly wouldn’t use the word ‘regret’ – our academy is one of the best in the world and you look at our first team now with the players that we have produced who are in and around that squad.

“It’s not easy. It’s not an exact science to pick players but the academy staff do brilliantly here. Declan Rice has given himself personal credit for having the great start to the career that he’s had at West Ham.” 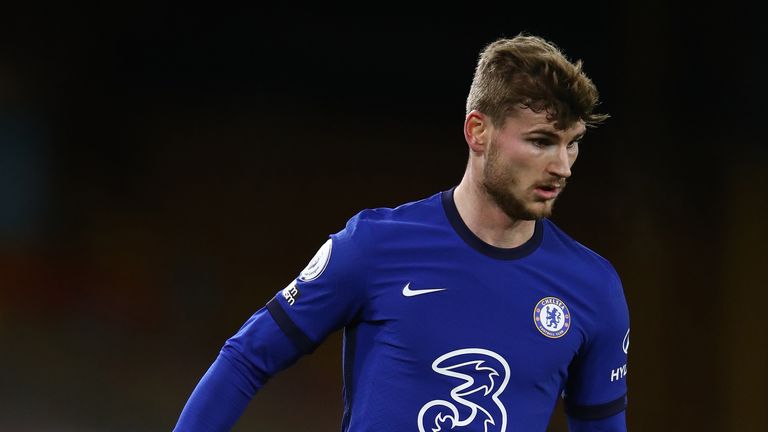 Chelsea’s Timo Werner admits he is struggling to adapt to the Premier League following his big-money summer move, but believes he will soon start firing on all cylinders.

The Germany international has scored just four goals in 13 Premier League games since his arrival from Bundesliga side RB Leipzig in a €50m (£45m) deal in June.

“It does matter how much you cost. It’s always a bit of pressure when you come to a new club,” Werner said. “But I think I can handle it very well. It’s not something new.

“The pressure is a little bit higher than the previous years but I think good footballers are the best under pressure and that’s my plan, I can do very well under pressure.

“The Premier League is a little bit different to my old league. It’s tougher than I thought. The contact here is harder than in Germany, it’s what I expected but not like this.”