Gareth Southgate will wait until after Sunday’s game against Romania to select his final squad member after Trent Alexander-Arnold was sent home with a torn thigh muscle.

Scans yesterday showed a “grade two quad tear” in the Liverpool defender’s left thigh that will keep him out of action for up to six weeks.

Alexander-Arnold has already returned to Merseyside for rehabilitation but, because it is a new injury that occurred after the June 1 deadline to name the final 26-man squad, manager Southgate is allowed to draft in a replacement.

However, with the fitness of Harry Maguire, Jordan Henderson and Kalvin Phillips also in doubt – all with pre-existing injuries that would mean no replacement would be possible – Southgate will leave it until the last possible moment to make his selection.

With all changes required to be made by the start of the tournament, practically that means Sunday’s game will be a final trial for one lucky player to join the party.

Jesse Lingard, who was impressive against Austria, and James Ward-Prowse are the obvious front-runners.

JUST IN:
Trent Alexander-Arnold ruled out of Euro 2020 with thigh injury 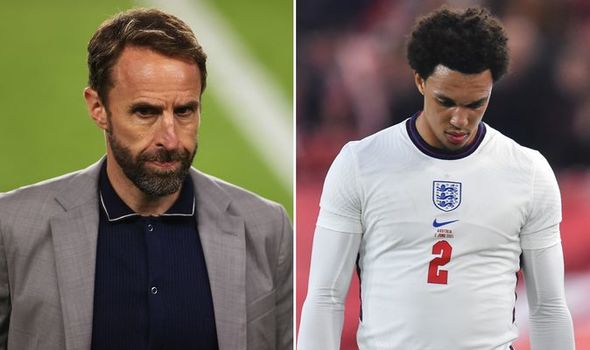 But with so many defensive players struggling with fitness, Ben White would come into the reckoning after an impressive debut cameo as a substitute.

On the flip side, England’s toothless display may nudge Southgate towards adding Ollie Watkins to his available firepower.

Either way, it is a sad end to what had been a difficult three months for Alexander-Arnold since he was left out of the international get-together in March.

Since then, there had been intense speculation over whether the 22-year-old would make the final squad in the first place.

However, after getting the nod, in the final minute of the first warm-up game against Austria on Wednesday night, Alexander-Arnold pulled up after making a clearance and needed to be helped around the pitch and down the tunnel at the Riverside Stadium.

Meanwhile, Harry Maguire is now part of the England set-up after the Manchester United players finally joined up after being given a break following the Europa League final and will continue to be assessed.

Additionally, Liverpool captain Henderson is causing growing concern after a setback prevented him from playing even as a substitute against Austria.

With Kalvin Phillips also a concern it will be a nervous few days in the camp as even the specially-extended 26-man squads allowed by UEFA to combat the strains of two intense back-to-back seasons mean England are already beginning to look short of options in key areas with the opening game against Croatia at Wembley in just nine days’ time.