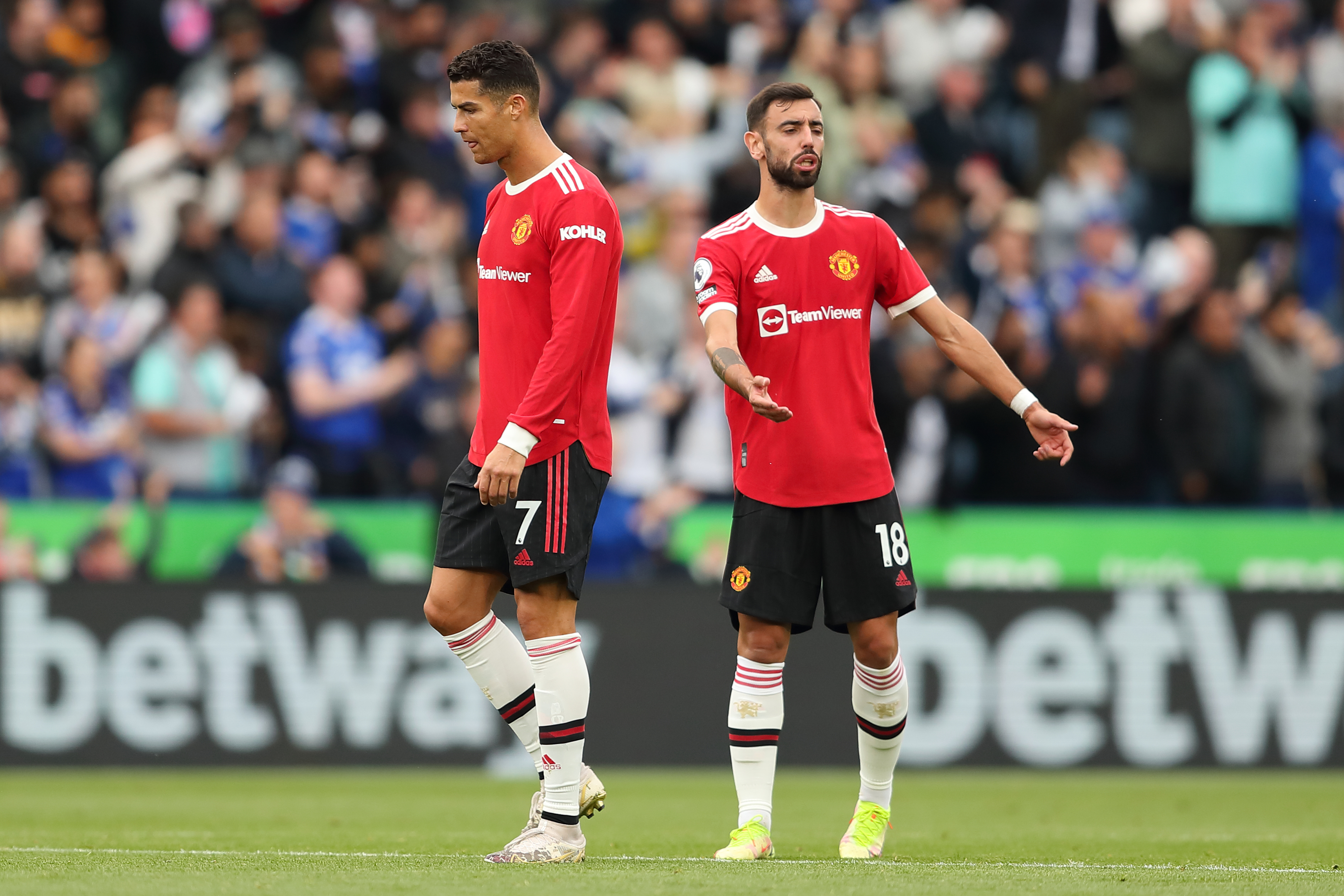 Gary Neville has criticised Cristiano Ronaldo and Bruno Fernandes for moaning and ‘flailing their arms’ at their Manchester United team-mates during the side’s 4-2 defeat to Leicester given they were doing ‘nothing’ in the match.

Mason Greenwood fired United in front with a thunderbolt in the 19th minute, but Youri Tielemans responded with a wonder strike of his own before a flurry of late goals from Caglar Soyuncu, Jamie Vardy and Patson Daka secured victory for the Foxes.

It means the Red Devils have lost four of their last seven matches in all competitions and the result piled yet more pressure on head coach Ole Gunnar Solskjaer, with the club five points adrift of Premier League leaders Chelsea in sixth place.

Speaking on Sky Sports’ Monday Night Football, Jamie Carragher argued that Ronaldo’s arrival had left Solskjaer with a dilemma in where best to play Pogba, with the Frenchman deployed in a midfield two alongside Nemanja Matic versus Leicester.

However, former United right-back Neville insisted it wasn’t just a ‘Paul Pogba problem’ on Saturday and instead focussed on the questionable body language of Ronaldo and Fernandes while Leicester were on the ascendancy at the King Power Stadium.

‘I don’t think this is a Paul Pogba problem. The reason I say that is that on Saturday I watched Ronaldo and Fernandes up front, nothing. I saw them flailing their arms a few times at a couple of their team-mates which I didn’t like. That needs to stop!

‘I saw wide players with no intensity in their pressing. Ole Gunnar Solskjaer can’t go back to [Scott] McTominay and Fred and he can’t go back to Matic and Fred because the reality is we know what that delivers. It won’t deliver Manchester United success and Solskjaer has brought all these talented players in.

‘Pep Guardiola plays with David Silva, [Kevin] De Bruyne, [Leroy] Sane, [Sergio] Aguero and [Raheem] Sterling which is five attacking players. What Solskjaer needs to somehow try and prove is that he as a top manager and his development as a coach this season can get top players to work as hard as the other top players in the league.’

Neville believes Solskjaer is going to have a ‘massive problem’ at the end of the season unless his star players begin ‘putting a shift in’ like their counterparts at Manchester City and Liverpool.

‘It’s not just Paul Pogba. They are not organised which is a problem for the coach and the coach needs to deal with that, but they also need to put a shift in,’ the ex-England full-back added.

‘I played with really great players and I’m watching great players in this league, the likes of City and Liverpool, fantastic teams, as good as I’ve seen in the history of the Premier League and they work like dogs.

‘They work like non-league central midfield players and forwards and they’re the best players in the world.

‘Players like Salah, Mane, De Bruyne and Foden, all these great players, they’re unbelievable. So why is it we accept from Manchester United in the front part of the pitch that these players won’t work as hard as them.

‘I can’t accept that and Ole Gunnar Solskjaer has got to go and get the best from those players because if he doesn’t, he’s going to have a massive problem at the end of this season.’