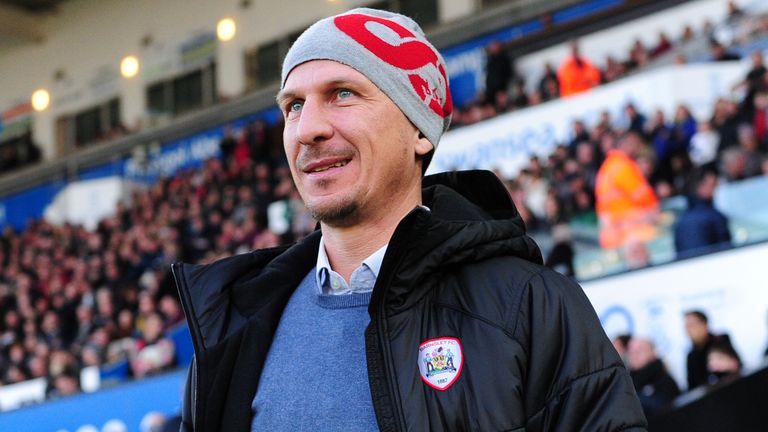 Barnsley boss Gerhard Struber wants to finish the season – even though his side would avoid relegation if it was abandoned.

The Austrian, whose team are bottom of the Championship and seven points adrift of safety with nine games left to play, believes concluding the campaign is the right thing to do once it is safe to do so.

Struber has made an impact since taking over a struggling side last November, when he joined from Wolfsberger AC, and Barnsley would currently be safe in 17th place had the season begun when he arrived at Oakwell.

But the 43-year-old still believes they can stay up if the season is resumed and, he is readying his players for the final push, as the EFL thrash out plans for a return to football almost certainly behind closed doors.

Speaking exclusively to Sky Sports News from his agency’s office in Austria, Struber said: “I am a sportsman and I will regulate it on the field. I think this is what everyone wishes in my team, and also me.

“I think when the games are abandoned and we have no chance to play in the next few weeks, it is clear the league and all the games have no value. This is not so easy for many clubs but it is the only fair-play rule.

“The most important thing is for it to be safe. This is the biggest responsibility for my players and staff. For everyone to be safe. (But) when we start, we have nine games and a final situation. It’s a big chance in a new competition for my players to show and we will take the chance to climb out of the relegation zone.

“We believe we can do it and this is the most important thing when we go into the final nine games; that we have the right motivation.”

Struber learned his coaching craft at Red Bull Salzburg and his Wolfsberger AC team were flying high in the Austrian Bundesliga when he left, having drawn twice with Roma and beaten Borussia Monchengladbach in the Europe League.

But having adjusted well to life in Britain, Struber says his intention is manage in the Premier League in the future – but only after he has ensured Barnsley’s safety in the second tier.

“I like England – I think it is the mother of football and I like living here,” he said. “I like the humour very much. I hope I can stay longer.

“When I remember my time, I had my education in the Red Bull world and I believe I brought a good style into Wolfsberger AC. The big thing for me was to work in England and now I have the chance to work with a small club like Barnsley.

“My big aim is to work at the highest level in the near future but, especially right now, my focus is to stay in the league with Barnsley.”