Gianluca Vialli was one of the great strikers of his generation, combining brilliant positioning and intelligent movement with the kind of physicaltiy that made him a nightmare match-up for any defender.

Described as the new breed of Italian forward during his time with Juventus in the early '90s, Vialli was one of the first foreign signings to leave a lasting impact on the Premier League.

Signed by Chelsea just one year after being named the World Soccer Player of the Year, the striker enjoyed two seasons as a player at Stamford Bridge, before replacing Ruud Gullit in the dugout in 1998. 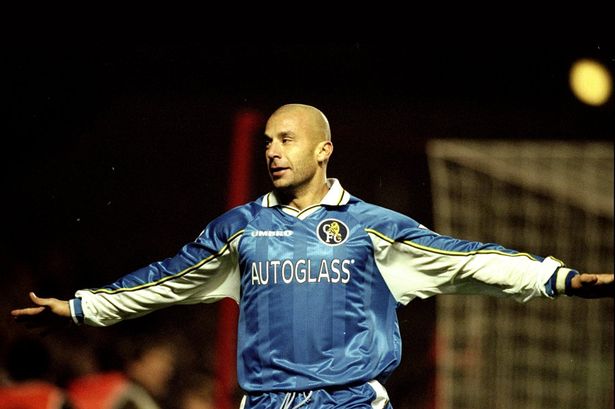 When he was appointed the ex-Sampdoria striker became the first Italian to manage in the English top-flight and by the time of his dismissal in 2000, he was the Blues' most successful boss, winning five pieces of silverware including the UEFA Super Cup in 1998 and the final FA Cup to be played at the old Wembley Stadium in 2000. His spell on the pitch at Chelsea marked the end of a glittering 20-year career that saw him score more than 250 times at club level.

Watching the 56-year-old, who has beaten cancer since his retirement, battle on the pitch, few would have been aware of his privileged upbringing.

But it was certainly that, Vialli's father was a self-made millionaire and young Gianluca was brought up in the stunning Castello di Belgioioso in Cremona. Living with his parents and four siblings, the Viallis had to find room in the 60-room castle. These days, he merely uses the castle as an occasional holiday home.

And while he's not relaxing in his huge family residence, he used to be a regular in major Pro-Am golf events, rarely looking out of place at courses like St. Andrews, Carnoustie or Kingsbarns.

In the discussion of the poshest footballer, Vialli has to be right towards the top of the list.