Brendan Rodgers believes Jose Mourinho has added another string to Harry Kane’s bow by playing the Tottenham striker in a deeper role.

Some observers believe Kane’s scoring prowess has been diluted by dropping back.

Playing the country’s premier goalscorer as more of an attacking midfielder seems a bold move by Mourinho but ahead of the Foxes’ Premier League visit to Spurs on Sunday, live on Sky Sports, Leicester boss Rodgers said: “I don’t think it is.

“I think if you look through the game, you look at Roberto Firmino, he does a similar role for Liverpool. Lionel Messi did it for Barcelona. Other players have done it all through time. 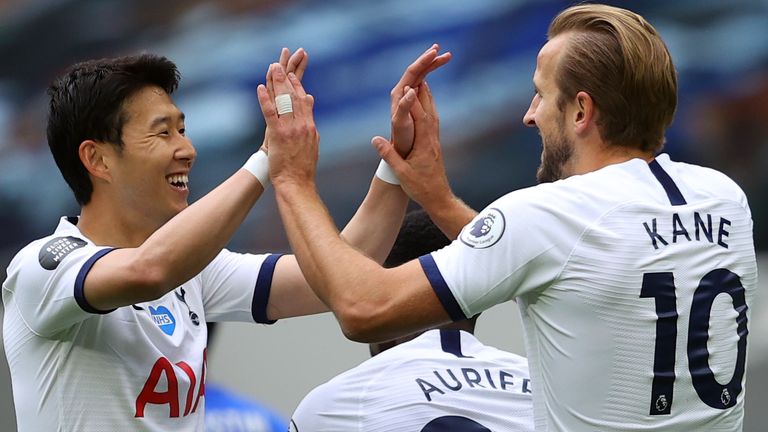 “He’s clearly a wonderful goalscorer with great ability, finishing in and around 25 or 30 yards out.

“But what you’re now seeing also is the ability of a player to drop underneath and make passes like a midfield player.

“I don’t think anything has been taken away from his game. I think Jose has asked him to drop that little bit deeper and I think it’s his natural intelligence.

“In Harry, you can see he’s a wonderful player, he’s got a great football brain. You see him dropping underneath and having that ability to make those passes.

“So it’s an addition to how they play rather than something taken away from them.”

Rodgers can counter Kane’s threat on Sunday by welcoming back Jonny Evans – from suspension – and fit-again Timothy Castagne.

The Belgian full-back had been one of City’s most impressive performers until he suffered a hamstring injury two months ago.

Rodgers said: “He’s got great energy and can run in behind. He gives us a good profile in terms of defending set-pieces. He’ll be a huge plus.

“When he’s defending, he really gets in contention with people. From a set-piece perspective, he’s a good size so he can defend the box well.

“On the attacking side, he’s so good at penetrating without the ball. He wants to get up there and score goals. It definitely improves our squad.”

Overall, Sky Sports will be showing at least 146 Premier League matches live throughout the 2020/21 season, continuing to bring you all the latest twists, turns, and shocks at the home of the Premier League. There will also be two additional midweek programmes – one will be played across the weeks commencing January 11 and 18 and the second will be in the week commencing May 10. All of these games will be broadcast live.