Robbie Neilson entered this match with Great Expectations — instead an all-too familiar Tale of Two Cities played out.

The Hearts boss’s firm pre-match prediction of a home win over Rangers was probably borne from a desire to inspire rather than any misguided confidence.

Yet, faced with a chance to not only reel in their opponents on points but potentially overhaul them on goal difference, Hearts froze. And the fundamental gap that exists between the Premiership’s Glasgow clubs and their Edinburgh rivals was again brutally exposed.

Hearts are hardly a club of Dickensian poverty and their progressive fan-ownership model and European ambitions afford the possibility for a bigger and brighter future. 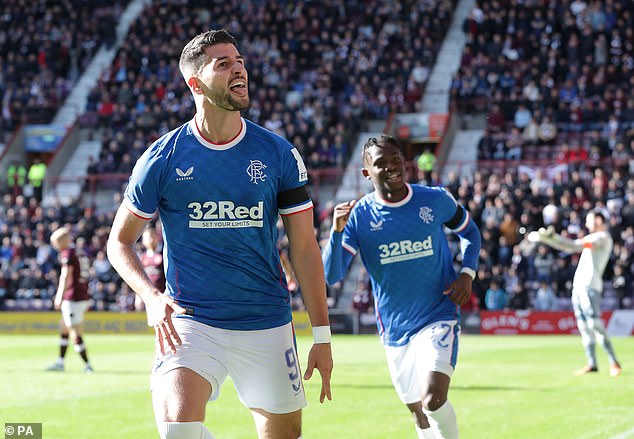 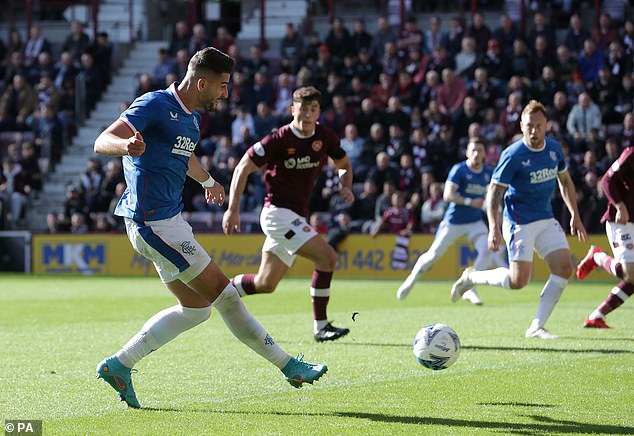 Sporting director Joe Savage has even stated an ambition to challenge for the title yet for all the tall talk, the truth is that in the here and now they remain the length of the M8 off that particular goal.

The contrasting responses of the respective manager’s to pre-match defensive crises summed up the gulf.

With John Souttar and Filip Helander injured and James Sands staring a Chamnpions League suspension in the face, Giovanni van Bronckhorst could call on £4million summer signing Ben Davies to partner Connor Goldson at the back for Rangers.

With Craig Halkett not yet ready to return and Kye Rowles also missing, Neilson reasoned that a pairing of teenager Lewis Neilson and Stephen Kingsley, a left-back, was the best way to go. 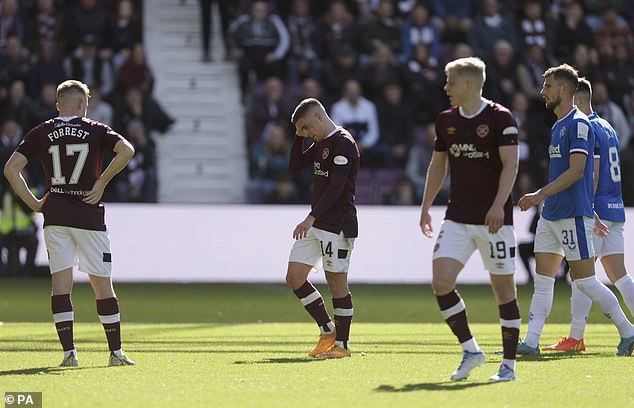 Lining up in 4-2-3-1 formation, Hearts were clearly under instruction to go forward but surely not to the extent that saw Kingsley abandon his post so recklessly in the lead-up to the opening goal.

Doubtless on a high after his Scotland appearance in Krakow in midweek, he was a little too excitable as he charged out in pursuit of Antonio Colak, leaving his teenage sidekick isolated at centre-back.

Known primarily for his penalty-box prowess, Colak played the situation perfectly, switching the ball wide to Ryan Kent and then sprinting for the area with Kingsley trailing.

Kent’s end product is not always on point but anything central with pace would give the Croatian something to attack. Left-back Alex Cochrane did his best to tuck in and cover but Colak’s header was precise and kissed the inside of the post on its way in. 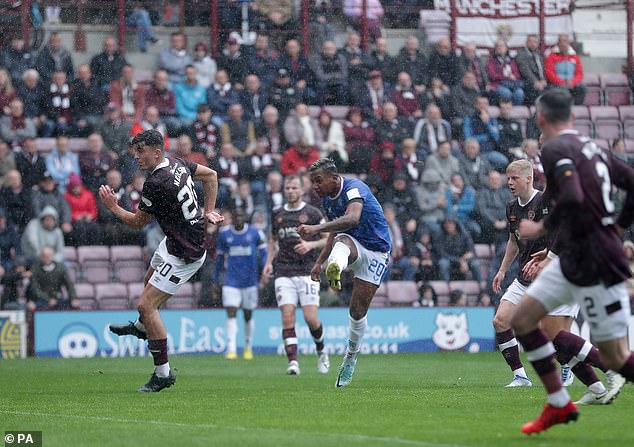 The advantage should have been doubled when former Dundee United kid Neilson hesitated to attack a bouncing ball, allowing Scott Arfield a clear sight of goal. The midfielder wasted the chance with an off-target left-foot finish.

Lawrence Shankland has toiled in the lone striker’s role this term and he was given an extra hand in attack in Stephen Humphrys, who was deployed off the right.

Acquired on loan from Wigan, Humphrys offered a powerful dimension that troubled Borna Barisic and indeed Allan McGregor, who had to be smart to get down and hold one punchy shot from distance.

Too few around him were offering a threat. Freed up to play a central role, Barrie McKay was having next to no impact and the same could be said of Alan Forrest off the left.

The lightweight charge is one often labelled at Rangers’ Rabbi Matondo, yet he emerged front and centre for three key moments before half-time.

First there was guile and vision behind the assist that saw the Welsh cap feed Colak for a lovely reverse finish inside beyond Gordon.

The game was eventually sealed by Devlin’s stupidity.

Alex Cochrane was doing a perfectly good job of guarding Matondo as he shielded the ball at the halfway line but the Australian came steaming in with excessive force, catching his opponent dangerously on the ankle.

Those Hearts supporters who were not privy to the referee’s view nursed a loud sense of grievance but they were dealt a favour soon after when McLean whistled for a foul as Craig Gordon spilled the ball to Arfield for an open goal. 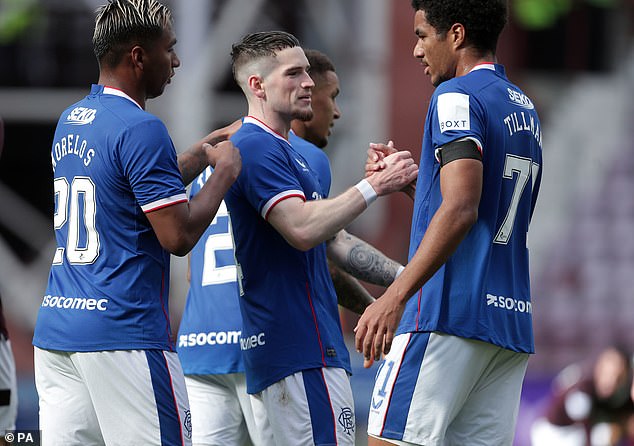 Matondo’s challenge was hardly worth the foul.

Van Bronckhorst had the luxury of making two conservative half-time substitutions, both apparently with Anfield in mind. Off came Davies and Ryan Jack, with Sands and Steven Davis stepping in.

Hearts too have a big European game against Fiorentina to come but Neilson’s decision to make two changes seemed more immediate in its goals.

Neither Kingsley nor McKay could complain about going off and their replacements almost combined for a response when Robert Snodgrass’s corner provided a free header for Andy Halliday. The wayward finish was about as good as it got for Hearts.

There was a pre-season friendly feel as both sides used up their allocation of subs.

Josh Ginnelly injected a little spark for the home team, flashing one raking shot not far off the target from distance but it was a Rangers sub who had the final say. 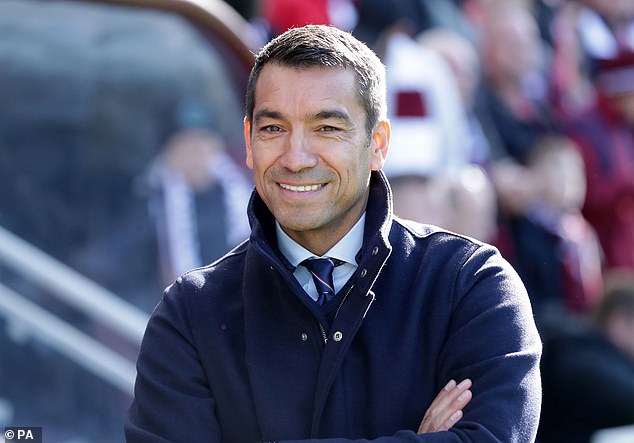 There are many Rangers fans who would prefer to see Alfredo Morelos and not Colak leading the line for their team. Fit and on form, the Colombian may offer more but neither metric has applied this season.

In the art of finishing, he also offers a blunter instrument but nevertheless he helped himself to a late goal, bludgeoning the ball into the net after James Tavernier managed to work an opening.

Kent rounded things off in stoppage-time, cutting off the left to curl a fine shot home from 20 yards, a pleasing moment ahead of his old employers on Merseyside on Tuesday.

Kent will certainly start at Anfield and, with 11 goals in 14 appearances to his name, Colak would be entitled to feel aggrieved if Morelos supplants him.

Yet with Premier League aristocracy in wait, these selection issues may be largely irrelevant. Having made a mockery of Neilson’s words, Rangers should be wary of encountering their own reality check on Merseyside.