This Saturday it should have been the FA Cup final at Wembley. With the future of this season’s competition up in the air, we are recalling some of the classic finals.

In the first of our series, DOMINIC KING takes us back to 2006 and Liverpool’s Steven Gerrard-inspired victory…

Before we can recall the goal, the penalties and the meeting with royalty, we must first discuss the cramp and the throw-in. 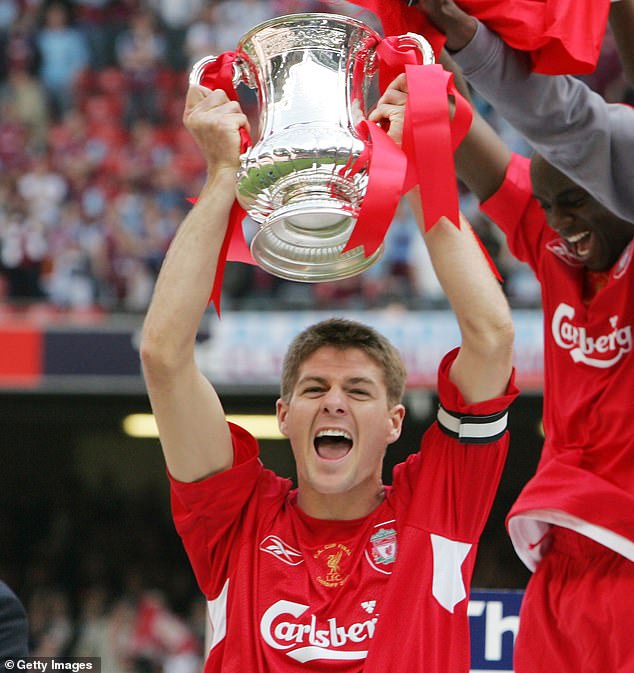 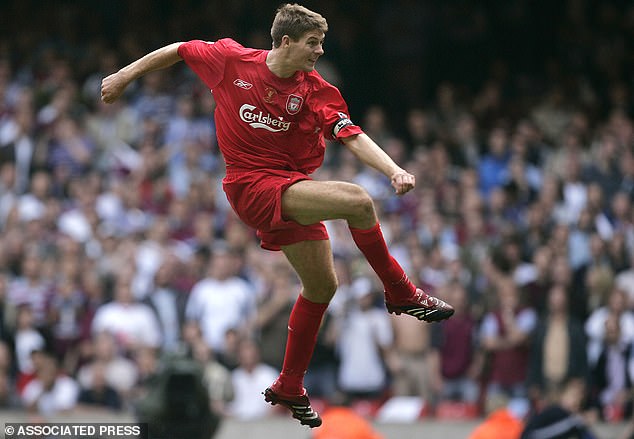 The 2006 FA Cup final — the last of six staged at Cardiff’s Millennium Stadium — was contested by Liverpool and West Ham but it now belongs to Steven Gerrard, in the same way that the 1953 final is synonymous with Sir Stanley Matthews.

Peter Crouch called his midfield team-mate’s performance ‘superhuman’; Jamie Carragher went one step further, saying Gerrard ‘put his Superman cape on and got me out of jail!’ after Carragher had scored an early own goal.

History, however, would look very different had it not been for a sequence of events in the 91st minute.

With West Ham leading 3-2 and on the brink of a remarkable upset, Liverpool striker Djibril Cisse was stricken with cramp and fell to the floor. Lionel Scaloni, West Ham’s right back, rolled the ball into touch.

It was a sporting gesture but, in those high-pressure moments, it pays to be streetwise. 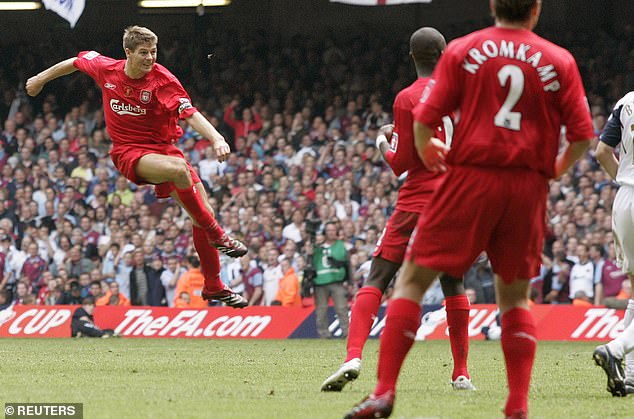 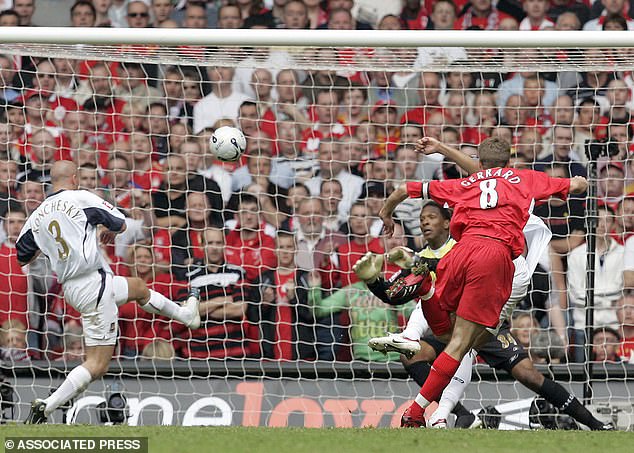 ‘Why didn’t he smash it up the pitch?’ Carragher asked. ‘It’s the last minute!’ Cisse was not alone in suffering. Gerrard was trying to loosen his muscles, bending his legs to stop the spasms. He was loitering close to the halfway line.

‘I’d already been substituted,’ Crouch says. ‘Rafa (Benitez, Liverpool manager) had made all three changes. People on our bench were shouting whether Stevie could continue. He could barely move.’

Losing would have been an ignominy, 12 months on from winning the Champions League. Gerrard said: ‘I’m not sure I would ever have got over it.’

West Ham, searching for a first trophy since 1980, were almost home. ‘I looked at Rafa and knew he thought they had given it their all and it wasn’t going to happen,’ recalls Hammers boss Alan Pardew. ‘I thought they were a spent force and my assistant Peter Grant said to me, ‘Only Gerrard can get them out of it’.’

Play restarted. Liverpool took the throw-in and gave it straight to Scaloni. His clearance went only as far as Gerrard, who laid the ball to John Arne Riise. 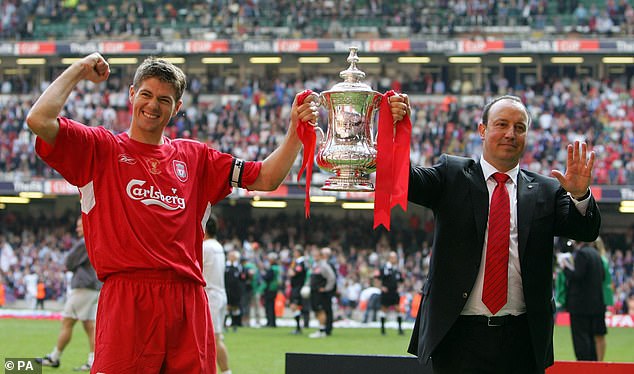 ‘Surely we are not going to get another goal in normal time?’ John Motson wondered in his BBC commentary. In the blink of an eye, Motson had his answer.

Riise’s ball into the area was half-cleared, 30 yards from goal. What followed was one of the great goals, a pure strike that flew like an arrow past West Ham goalkeeper Shaka Hislop.

‘I was scared at 3-2,’ Gerrard said. ‘I could see others were getting tired and I was tired myself. It was dead hot, the pitch was massive and I honestly didn’t think we were getting back into it. Then I heard the (stadium) announcer saying, ‘There will be a minimum of four minutes’.

‘Loads of times in that situation, a ball doesn’t sit up right, it bounces too high or it goes on your left foot. When it is set like that, it is an absolute dream.

‘As soon as I saw it falling, I wasn’t thinking of anyone else. I was hitting it.’

There have been many last-gasp goals in FA Cup finals but this was something different. 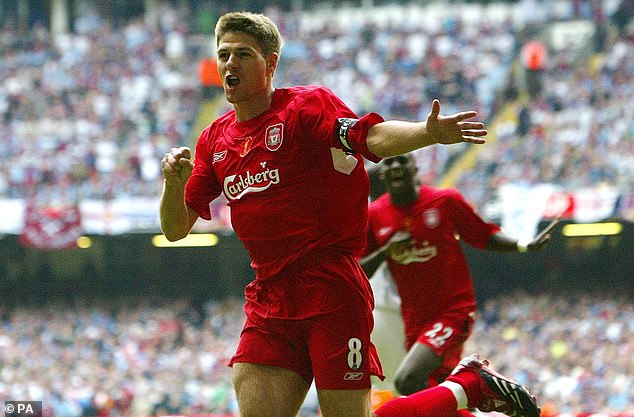 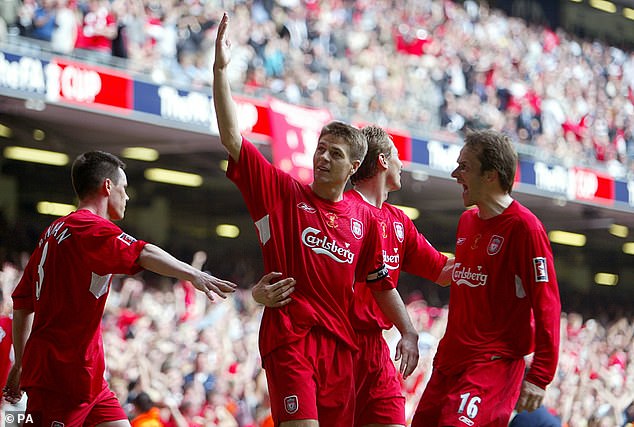 ‘I honestly don’t know how he did it,’ Crouch says. ‘For most players who have severe cramp, if you asked them to jump, you wouldn’t get a cigarette paper under their feet.

‘So, to go from that state to producing that moment was unreal. It would have broken our hearts to lose that final. Those final minutes were horrific, sitting on the bench. I thought we’d blown it.’

Motson called it the best final in modern times — impossible to dispute. West Ham did not deserve to leave Wales with their hearts broken, having led 2-0 inside 28 minutes, and then lost 3-1 on penalties.

‘We were devastated,’ said Pardew. ‘The equaliser flew in, he caught it perfectly and in that moment you just can’t believe your luck.

‘You’ve been the better side, you’re minutes away.’ 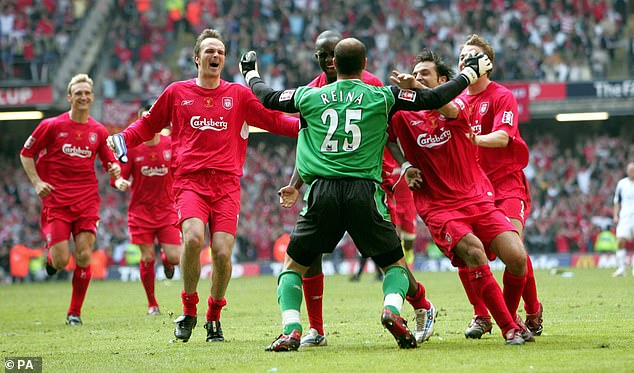 It was their misfortune they met Gerrard in such form. He set up Liverpool’s first with a 40-yard pass to Cisse and also scored in the shootout.

Gerrard’s performance — commended by Prince William, who presented the trophy — seemed scripted from a comic book.

‘The whole occasion was incredible,’ Crouch recalls. ‘I’ve never been as nervous before a match as before that. You get told to treat it as just another game but it’s the FA Cup final, we grew up on it as kids.

‘I remember everything about it. I still think about the goal I had disallowed.

‘I’ve thought more, though, about Stevie’s. The quality is unreal. That’s what makes the big players.’