How Thiago Alcantara transfer could help Liverpool improve upon perfection

With the return of the Premier League quickly approaching and the condensed nature of the off-season adding even more pressure to the process of building or rebuilding entire squads, Liverpool manager Jurgen Klopp’s will surely have one thing on his mind: how do you improve upon perfection?

There’s obviously no such thing as “perfect” in football but the manner in which Liverpool stormed to the league title last season was probably as close as we’re going to get to a gold standard in popular sport. Records were broken, trends were overturned and Klopp’s squad looked untouchable.

So where does the Liverpool manager go from here? At Borussia Dortmund Klopp’s decisions were always made for him, with at least one star player walking out the door every summer. Regardless of how well his side had done in the previous campaign, the German coach always knew the summer would bring with it an unfortunate departure and then an exhausting hunt for a new playmaker, goalscorer or towering central defender.

Of course, the economics of modern football allow Liverpool to avoid such a fate with their star-studded side and as such Klopp can sleep a little easier when spring turns to summer these days. However, that doesn’t mean change is any less inevitable.

Rather than being forced into wholesale imports, Klopp seems intent on making incremental changes to a team that is seemingly devoid of any obvious weaknesses. However, where Liverpool’s forward trio and defensive line seem relatively settled and devoid of issues, Klopp’s midfield throws up a number of interesting question marks.

Naby Keita has so far failed to live up to his transfer from RB Leipzig, club captain Jordan Henderson is now the wrong side of 30 and midfield dynamo Georginio Wijnaldum is now in the final year of his contract at the club.

Naturally, it’s that last point that Klopp will find most troubling. Henderson is certainly showing no signs of slowing down and Keita’s spot on the bench has long since been overshadowed and somewhat forgotten about by Fabinho’s role in the team. It’s Wijnaldum, with rumours of a move to Barcelona circling, that will most likely need replaced this summer. And that is why Thiago Alcantara is on the Reds’ radar.

With the Spaniard’s own contract entering its final year, Liverpool could well get him for a knock-down fee. However that shouldn’t discount the notable improvement Thiago would bring to Klopp’s side.

First brought to the Bavarian club under the watchful eye of Pep Guardiola, Thiago has gone on to play a number of roles under no less than five managers in just seven years at Bayern. And while that may suggest a jack of all trades that is often squeezed into holes in the side – much like Wijnaldum – in Thiago’s case it really is simply down to the fact that he is a master of most midfield disciplines.

Despite playing as a holding midfielder for much of last season, Thiago still accomplished almost three times as many passes into the final third per game than Wijnaldum and twice as many into the penalty box. The Spaniard also attempts more dribbles than his Dutch counterpart and succeeds in getting by his marker 63% of the time, compared to Wijnaldum’s 45%.

Thiago is also an exceptionally accomplished passer of the ball. While both players have an almost identical completion rate of 92%, Thiago averaged almost twice as many passes per game than Wijnaldum this season. Intriguingly, back passes only accounted for 11% of the Bayern midfielder’s total passes per game, while Wijnaldum’s made up a sizable 20%.

Another improvement that Klopp may also be eyeing up is Thiago’s capacity to open games up with long balls and his preference to orchestrate speedy attacks from the comfort of the centre circle. While he and Wijnaldum enjoyed an almost identical completion rate for longer passes last season, Thiago averaged 10.05 per game compared to Wijnaldum’s 1.33. In fact, Thiago’s average pass length from last season stands at almost 14 feet longer than Wijnaldum’s which perhaps illustrates just how differently the two players move the ball around the pitch. 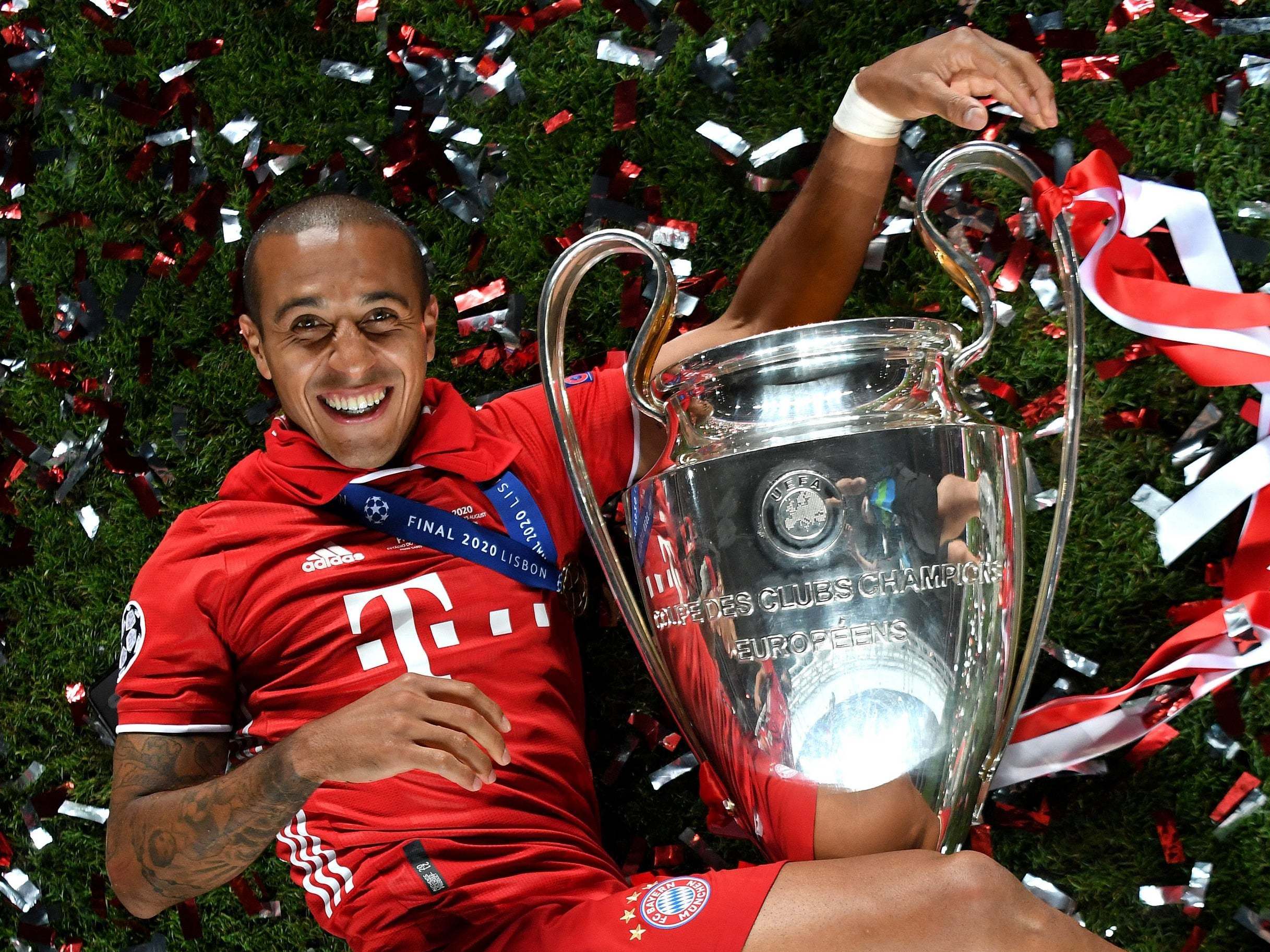 However, at the crux of the comparison of these two exceptional players is that while Thiago is unquestionably the superior passer of the ball and seems more intent on moving it up the pitch, he doesn’t offer compromises going the other way.

Not only did Thiago win more aerial duels and tackles than Wijnaldum last season, but he’s also an exceptional talent when it comes to reading the game and intercepting an opposing counter attack or move.

In last season’s Bundesliga Thiago was second only to Joshua Kimmich as Bayern’s top midfield interceptor and also picked up 30 more than midfield partner Leon Goretzka. In fact, just four midfielders in the entire league averaged a higher average than the Spaniard and his average of 14.31 recoveries per game completely dwarfs Wijnaldum’s 6.2.

As we saw in the Champions League final against PSG, Thiago was tasked with holding his midfield position while Goretzka marched from box to box. That day no Bayern player made more interceptions or successful tackles. The magic of the Spanish midfielder is that he also made more passes than any other player on the pitch that night and had more touches of the ball than Marquinhos and Ander Herrera combined while losing possession just once.

It’s this full package of attacking, technical and defensive attributes that makes Thiago a truly world-class central midfielder. He can comfortably play as a No. 10, a box-to-box playmaker or even as the deepest player in a team that harass opposing sides. His versatility is matched only by his unquestionable comfort in each position.

This is why an exceptional player like Wijnaldum can look so limited in comparison and why Thiago may not become Liverpool’s key playmaker or defensive enforcer, but he’ll undoubtedly bring incremental improvements across the board. And perhaps improve that which few thought could get any better.