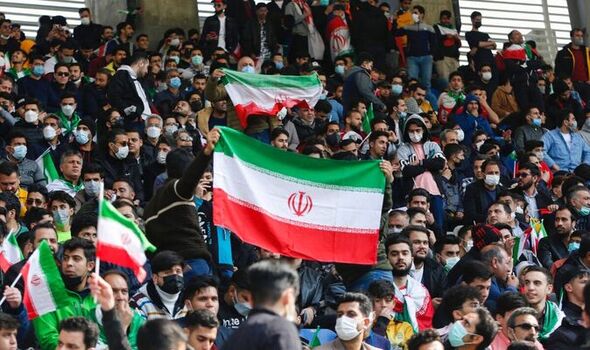 Iranian football fans have sensationally told Express Sport that they will be cheering their team on to lose their World Cup clash with Wales on Friday morning. The country’s public have been protesting for two months following the death of a woman in police custody.

The Iranian government has been accused of human rights abuses over its treatment of women. Players from their football team bravely refused to sing the national anthem ahead of their opening World Cup match against England on Monday.

England won that game 6-2 and Iranian fans – who wished to remain anonymous – have told Express Sport in Qatar that they want a similar result against Wales. They claim that the side is the ‘government’s team’ and not one that represents them.

“This is not our team, it is our government’s team,” one fan says. Another explains: “They have been killing our people for the past two months.”

Women-led protests erupted in Iran following the death of the 22-year-old Mahsa Amini. She had been detained for allegedly breaching strict laws on women wearing a hijab or a headscarf.

The protests have since spread to 150 cities and 140 universities in all 31 of the country’s provinces. Up to 468 people are believed to have been killed in the protests, to date.

Iranian footballers have been showing solidarity to protestors for several months. In their football leagues, stars have been refusing to celebrate goals in an act of defiance against their government.

One of Iran’s top footballers was arrested on Thursday after being accused of spreading propaganda against the Islamic Republic and seeking to undermine the country’s football team.