‘It does get tiring’: Normality slowly creeping back for homesick Socceroos

Graham Arnold has been away from home for nearly five months. But after dozens of flights, hundreds of Zoom calls to his family and friends and countless COVID-19 tests, the first semblance of something resembling normality will be waiting for him in the stands at Saitama Stadium on Tuesday night.

For the first time in Arnold’s roaming travels – which have taken in a total of seven World Cup qualifiers and an Olympic Games, all without crowds – there will be fans watching on as the Socceroos take on their arch-rivals Japan. 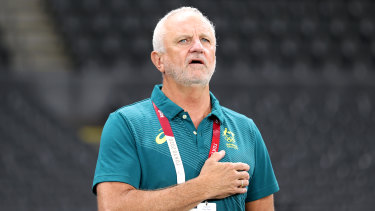 Socceroos coach Graham Arnold has been away from home for nearly five long months.Credit:Getty

Granted, there won’t be many of them, and they’ll be severely limited in what they can do, with spectators banned from singing or chanting for COVID-related reasons. But they can clap, at least.

“It might be weird for the Japanese players, not us. We can’t understand when they sing anyway,” Arnold laughed. “We knew that there was going to be a bit of a crowd … it’ll be a great experience.”

For the Socceroos, it is also a huge opportunity. Another win will make it 12 qualifying victories in a row, stretch the gap in Group B to nine points between themselves and the Japanese, and put them in the box seat to reach next year’s World Cup in Qatar.

It’s been more than a decade since they last beat the Samurai Blue, and they’ve never done it on Japanese soil. But with Japan reeling from two losses from their first three games in this phase of qualification, they may never get a better opportunity.

In fact, reports from Japan suggest that their head coach Hajime Moriyasu – Arnold’s former teammate at Sanfrecce Hiroshima – could be sacked if they fail to beat the Socceroos.

“He’s a fantastic guy. To be honest, I haven’t thought about it like that at all. All I’ve been doing is focusing on what we can do. But it just shows you how fickle coaching is,” Arnold said.

“Moriyasu’s done a great job with Japan, but a couple of losses and that’s the situation of [what] coaching can be. It’s exactly the same for me. That’s why I’m just enjoying one game at a time, one camp at a time, and enjoying what I’m doing at the moment.”

Arnold said the Socceroos will go into the fixture with a completely clean bill of health, with only a couple of “fresh leg changes” expected to the starting team that laboured to an important 3-1 win over Oman in Qatar last week.

“They’re all in great shape,” he said. “Their energy last night, even though it was a fun recovery session – I think the Japanese media that were there, they probably would have gone home and said ‘jeez, the Australian players, they get on well, they have a laugh, they have fun, they’re always laughing and joking and they’ve got a lot of energy’.” 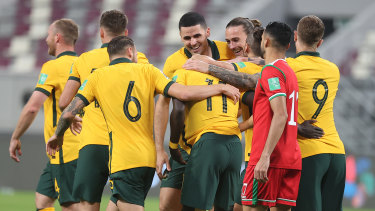 Arnold himself is holding up well, too, on that front. Instead of flying back into Australia between matches and undergoing mandatory hotel quarantine, he has stationed himself in the Middle East and the UK, living out of a suitcase for almost half of 2021.

There is light at the end of the tunnel – next month, the Socceroos are expected to play their first game at home in two years, with November 11’s World Cup qualifier against Saudi Arabia almost certain to be played in Sydney.

“I’ve been away since early May and I haven’t seen my kids since and my grandkids,” Arnold said.

“With everything that was going on I had to try and change personally my own strategy to get through this for the boys, for the players and the staff.

“I’ve been in charge [of the Socceroos] now for 21 games, I’ve played 19 away from home. We’ve had one World Cup qualifier, out of 11, at home. It’s a privilege to coach the nation. It does get tiring at times, but it’s what it is.”