Doha: Maty Ryan’s teammates have rallied around the Socceroos skipper after an uncharacteristic mistake was clinically punished in their World Cup showdown with Argentina – but one of his rivals at FC Copenhagen took a graceless stab at him on social media.

For years he has been a dependable presence on Australia’s last line of defence, but Ryan’s failure to control a backpass from Kye Rowles early in the second half cost them dearly, allowing Julian Alvarez to double Argentina’s advantage with a goal that effectively closed the door on their hopes of a quarter-final appearance.

The 30-year-old owned up after the match as coach Graham Arnold and the rest of Australia’s squad threw their support behind him.

But Ryan’s clubmate, Kamil Grabara, couldn’t help but show his true colours, kicked him while he was down with a spicy six-word tweet.

A back-up goalkeeper for Poland who has not seen a second of action at the World Cup, Grabara had publicly questioned Ryan’s ability and blamed him for Copenhagen’s poor results, saying the two were “not friends” and arguing that he should have been relegated to the bench.

His campaign worked: Grabara then usurped him as the Danish club’s No.1, and while there were concerns that Ryan’s lack of game time would be a problem for the Socceroos in Qatar, he has been as solid as ever at the World Cup – until Sunday morning (AEDT), when his heavy touch cost them a goal.

“Must have been politics, for sure,” Grabara tweeted with a sly face emoji.

Ryan, whose agent has forecast a move away from Copenhagen in the January transfer window, was told of Grabara’s message after the match. 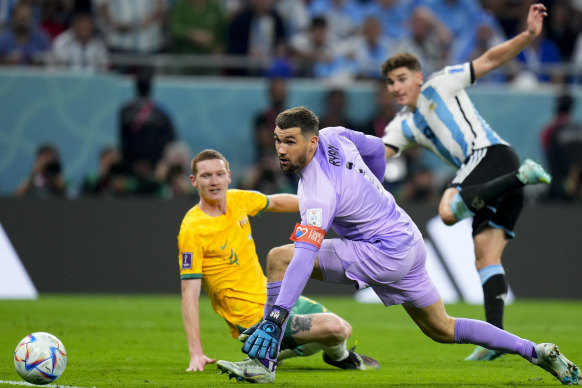 “I’m not surprised, really, to be honest,” Ryan said. “But his opinion doesn’t really concern me.”

Ryan said he would come back stronger from his error, one of precious few he has made in his long Socceroos career – and, to be fair to him, he bounced back immediately in the match, making a string of late saves to deny Argentina amid a furious finish featuring opportunities at both ends.

He said Australia’s defenders had been instructed to play the ball out from the back instead of bombing it long, as that would give them their best chance of playing through Argentina’s structure and penetrating further down the field, which was proven on multiple occasions. 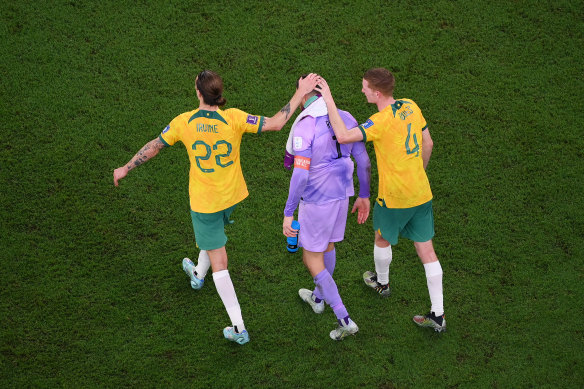 “[They] probably, tactically, put a bit more together in terms of how they wanted to come and press us. I had that moment where obviously they played it back to me, I took a touch and two of them were on me straight away,” he said.

“I tried to adjust as quick as I could and copped a little bump there – maybe I could have tried and milked a foul there or something in hindsight, or put my foot through it. The modern way of playing, and playing out from the back, you’ve still got to find the right balance of doing that, and knowing when to get yourself out of danger.

“I haven’t seen a replay but I’ll analyse it and I can only learn from it. We learn from our hardships in life and it’s definitely one for me. It hurts a lot, but I won’t let it get the better of me or define me. I’ll come back stronger for it.”

Instead of throwing him under the bus like Grabara, whose comments were slammed by Danish fans as well as Socceroos followers, Rowles was quick to jump to Ryan’s defence.

“You never want to see that happen to anyone. Maty’s saved our bacon more times than I can think – and he did it after as well, multiple saves that kept us in the game [so] we could keep fighting,” Rowles said.

“Everyone got around him. He’s his toughest critic, so he’s gonna be hard on himself. We’ve just got to get around him and make sure that he’s positive. He’s got many, many good years ahead of him as well. It’s just one of those moments.”