The president of the Australian football players’ union has slammed Perth Glory’s forced 14-day quarantine as a “nightmare”, suggesting it is unacceptable that players who have returned negative COVID-19 tests will be forced to spend Christmas isolated in hotel rooms.

The Glory’s season is in tatters and the A-League schedule plunged into disarray with the club’s players and staff forced into two weeks of quarantine after one player contracted the virus while travelling between Adelaide and Brisbane. The club has already been forced to postpone it’s next two games against Brisbane Roar and Adelaide United, and will be out of condition and match fitness when they are scheduled to play three games on the road in Sydney in the first week of January, against Sydney FC, Macarthur and Western Sydney. 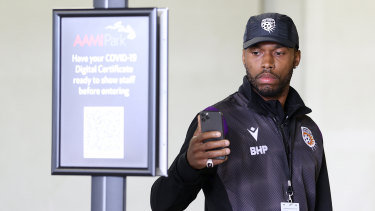 Daniel Sturridge and his Perth Glory teammates are undergoing 14 days of quarantine in Brisbane.Credit:Getty Images

However, it’s the toll on the mental health of the players and staff that is the most concerning for Sydney FC defender Alex Wilkinson, who is the president of the PFA.

“From a player welfare perspective, it’s really difficult for them to spend Christmas in quarantine,” Wilkinson said. “I can’t imagine it, having a family myself – it’s a nightmare really. I’m hoping there’s something that can be done that get them out of there.”

Glory chief executive Tony Pignata is in talks with the state governments in Queensland and Western Australia to facilitate an early release for the team if they continue to return negative COVID-19 tests. As of Saturday, they remained no closer to being exempt from the full 14 days of hotel quarantine.

The situation with Perth is unique to all other clubs who have had players contract the virus in recent weeks. Sydney FC, Macarthur, Western United and Newcastle Jets have all had at least one player contract COVID-19, however the rest of the squad was allowed to return to training and games after they had returned negative tests and/or undergone significantly shorter stints of isolation. Instead, the Glory have fallen victim to the stricter measures in Queensland, which are due to be relaxed within the fortnight.

“It’s just not fair the players who are effectively sacrificing the most to keep the league going, and they’re the ones that are paying the price being away from their families again, for longer periods and over the festive season. It’s not good enough,” Wilkinson said.

“They’ve spent the last two years on the road in hubs, in bubbles. Teams like them and Wellington need to be applauded for the sacrifice they made to keep the league going, to keep the integrity of the league. It’s not fair they’re the ones now paying the price. To be stuck in a hotel for 14 days over Christmas is just terrible.”

The Sky Blues are enduring their worst start to a season in more than a decade, however captain Wilkinson has hit back at suggestions their tactics have become stale and other teams have worked out how to beat the five-time champions.

Under the guidance of coach Steve Corica, Sydney FC have rarely strayed away from their 4-2-2-2 system that relies heavily on possession-based attack, high fullbacks and playing through the lines of other teams. It’s a system that brought unrivalled success in his first three years in charge and one that isn’t in stark contrast to that of his predecessor, Graham Arnold. It delivered Sydney two titles, one minor premiership and a runners-up medal with the club reaching three consecutive grand finals. 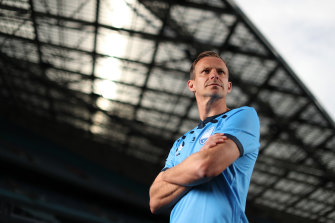 Alex Wilkinson says Sydney FC’s tactics aren’t the cause for their poor start to the season. Credit:Getty

After a winless start to this A-League season, criticism has mounted that a change in tactics could be needed. While Wilkinson acknowledges the system has been in place for some time, he doesn’t believe there is any need to change their tactics given the amount of success it has delivered the club in recent seasons.

“We haven’t essentially changed the formation we play for a while now,” he said. “It’s been the same for five or six seasons now, but there have always been tweaks within the formation that people might not see from the outside looking in. I just think that’s not the problem. I think it’s about us being better within that formation. It’s about every individual player lifting their game a little bit.”

Speaking ahead of Sunday’s match against Wellington Phoenix at Kogarah, Wilkinson believes the onus is on the players to turn Sydney’s form around, not the coach.

“It’s about us as individuals performing that little bit better and raising that game,” he said. “It’s only four games in and it’s by no means panic stations. It’s about everyone lifting their game individually and that will make the collective team play better.”