Liverpool manager Jurgen Klopp says he will not deny Jordan Henderson or Virgil van Dijk the chance to represent England or the Netherlands respectively at Euro 2020 this summer if they prove their fitness.

Henderson underwent groin surgery in February after the defeat to Everton at Anfield, while Van Dijk was ruled out of the rest of the club season with an ACL injury sustained in the reverse Merseyside derby fixture in October.

England manager Gareth Southgate claimed he will have to make a last-minute decision over whether the Liverpool captain can feature for his country after he was unable to call upon the midfielder during last month’s international break.

“I don’t want to take a player away from England or Holland, if they’re ready, they’re ready. It’s not down to me to make these decisions,” said Klopp.

“I have no idea about the Euros. Nothing has changed. They are where they should be at the moment.

Klopp says Henderson will return to training “in the next days and weeks” but he has “no idea” whether he will have enough time to regain his fitness in time for international selection.

Asked if there was a timescale on Henderson’s return, “No, not really,” the German said.

“He is not here in the moment, he cannot train, but he will train in the next days and weeks for sure.

“The problem is, I’m not a doctor, so it’s just about time. Will it be enough? I have no idea, but I hope so.”

Meanwhile, Klopp will speak to midfielder Curtis Jones about the red card he received while away on international duty with the England U21s.

Jones was sent off shortly after the Young Lions’ 2-1 win against Croatia on Wednesday when a mass brawl broke out. 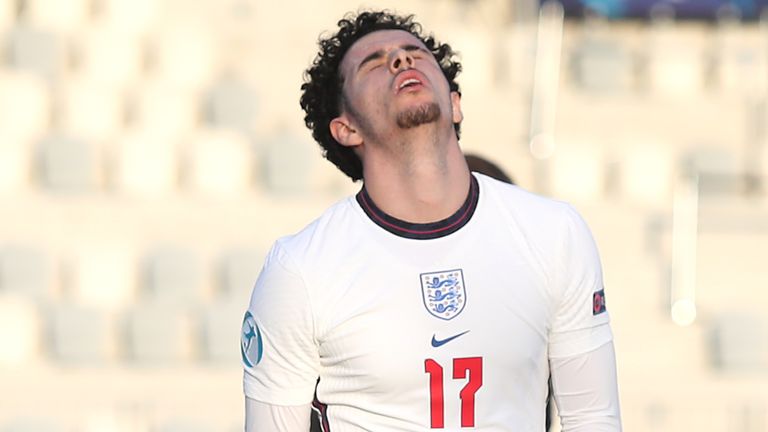 The 20-year-old had appeared set to send England through to the knockout stages by giving his country a 2-0 lead before an injury-time strike from Domagoj Bradaric saw Aidy Boothroyd’s team knocked out of the Euros at the group stage on goal difference.

“You don’t want to see these things on the pitch after the game,” Klopp said in his pre-match press conference ahead of Saturday’s Premier League trip to Arsenal, live on Sky Sports.

“He played a really good game, he was maybe the best player on the pitch, I saw the full game – saw his goal and the other things that he did.

“He was really in the game and then you lose a game, if the other team wouldn’t have done anything, I’m sure Curtis wouldn’t have reacted. There were some words or signs or whatever.

“Still, Curtis didn’t behave right in that moment, he knows that. If you ask him if he’d do that again, he’d say no.

“The only thing you can do about the mistakes you make in life is to learn from it and he will.”

Liverpool have so far had a season to forget, with their Premier League title defence collapsing amid injuries to key players and unprecedented results at Anfield.

“It’s been a really tough season for them – but it can be a season that ends in glory.

“They have a fantastic opportunity to not just win a trophy but also get in the top four. They are still in a great position in the Champions League, where they’re playing against a Real Madrid team that aren’t the same that they were years ago. There’s so much to play for there.”