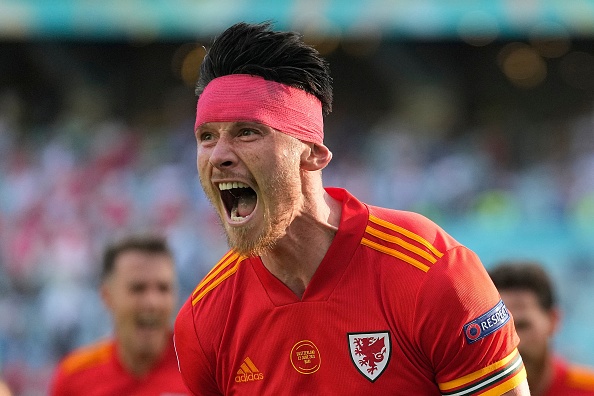 Kieffer Moore’s exquisite header saw Wales come from behind to earn a 1-1 draw in their opening Euro 2020 clash against Switzerland in Baku.

Breel Embolo looked to be the star of the show in Azerbaijan’s capital, with his second-half header from Xherdan Shaqiri’s corner putting the Swiss 1-0 up shortly after half-time.

In 30-degree heat at the Baku Olympic Stadium, Switzerland were comfortably dominant, but Wales struck back through Cardiff’s towering striker Moore with 15 minutes to go.

Substitute Mario Gavranovic thought he had won the game for the Swiss late on when he fired in from close range, but a VAR review deemed him to be marginally offside.

Switzerland controlled the game for much of the first period but the first, and biggest, chance of the first half fell to the 6ft 5ins Moore, who headed Daniel James’ cross back across goal, only to be foiled expertly by Swiss keeper Yann Sommer.

Vladimir Petkovic’s side then engineered a big chance of their own from a corner as defender Fabian Schar saw his near-post flick-on stopped on its way to goal by the terrific Danny Ward in the Wales net.

Benfica striker Haris Seferovic showed the threat of his venomous left foot when he fired an arrowed strike just wide of Ward’s post not long later.

And on the stroke of half-time, Embolo did brilliantly to tee up Seferovic in the box but the striker skewed wide his effort on his weaker right foot as the first half ended goalless.

The Swiss started the second half as strongly they finished the first, and got their deserved opener through Embolo, who held off Connor Roberts and headed in from a corner.

They had a chance to double their lead moments later as Embolo steamed straight through the middle of Wales’ team like a runaway train but wing-back Kevin Mbabu couldn’t convert the lay-off.

Wales perked up after going behind, and got back on level terms through a smartly-worked corner routine, in which Joe Morrell’s dink into the box was glanced in by Moore.

Welsh hearts could be audibly heard breaking when second-half substitute Gavranovic latched onto Embolo’s header and thrashed into the back of the net.

But Dragons caretaker boss Robert Page, and the nation, breathed a huge sigh of relief when the forward’s effort was ruled out for offside upon VAR review.

Wales memorably reached the semi-finals of the Euros in 2016, when they were beaten by eventual champions Portugal, and will be hoping to replicate their fine run of five years ago.

On Wednesday, the Dragons face Turkey, who were thrashed 3-0 by Italy in the tournament’s opening fixture on Friday night.

Following that game, Wales go up against Roberto Mancini’s in-form Italy on Sunday for their final group-stage clash.