Leicester 1-0 Brighton: Iheanacho is the hero with 94TH MINUTE winner

Leicester 1-0 Brighton: Kelechi Iheanacho is the hero as Foxes striker heads in winner in the 94TH MINUTE to see Brendan Rodgers’ side safely into the FA Cup quarter-finals

After sneaking through to the FA Cup quarter-finals in stoppage time on a freezing night, Leicester will fancy their chances of making history for the second time in five years.

The Foxes’ Premier League title win in 2016 is one of the game’s greatest stories. If they could claim the FA Cup for the first time in their 137-year existence, it would not be a bad way to follow it.

A dire game looked destined for extra-time when Leicester won a corner with seconds remaining. Cengiz Under and Youri Tielemans worked a short one and Kelechi Iheanacho – a 62nd-minute substitute for Jamie Vardy – rose unchallenged to head home in the 94th minute. It was tough on Brighton, who had looked the smarter side and had made the better chances. 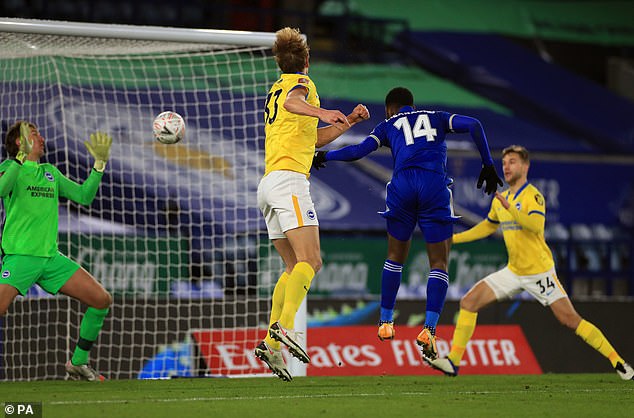 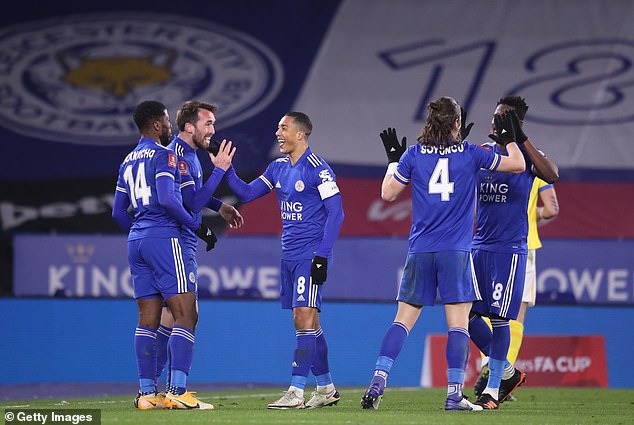 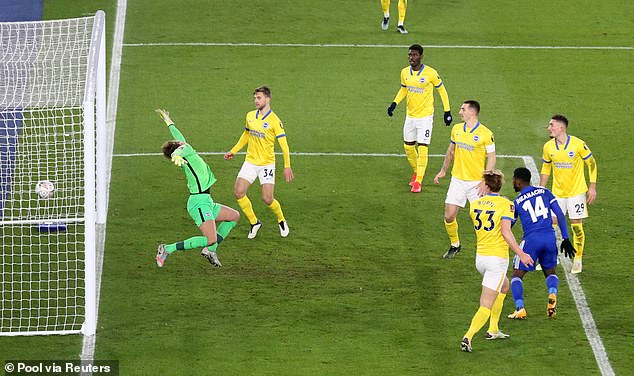 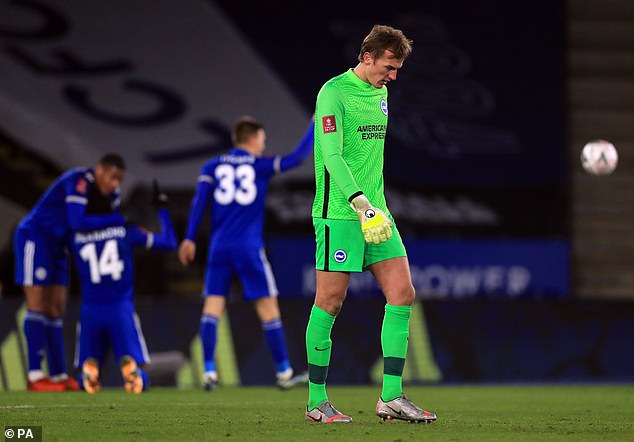 It proved bitterly disappointing for Christian Walton, who got a rare start in Brighton’s goal

Earlier, Leicester defender James Justin was carried off on a stretcher after falling awkwardly, while both Brighton’s Andi Zeqiri and Leicester’s Under had goals ruled out for offside. Justin has been outstanding for Leicester in his first full campaign as a regular at this level and his departure is a cause for concern, though boss Brendan Rodgers expressed optimism about his condition.

Rodgers said: ‘If there’s ever a time to score a winning goal it’s at that stage. Everybody was delighted there wasn’t an extra half-hour.

‘We are hopeful James Justin is not as bad as he looked. He felt something in his knee but on first inspection the medical guys are confident there is nothing major there.’

In an early signal as to where their priorities lie, both sides made seven changes, with Jamie Vardy starting his first game since January 19 following hernia surgery. Rodgers held back a number of key men with one eye on Saturday’s 12.30pm kick-off against Liverpool in the league. Mike Dean took charge of his first game since his controversial decision to send off West Ham’s Tomas Soucek – later overturned – at Fulham last Saturday. The referee has since reported death threats to police and will not be involved in Premier League action this weekend.

Zeqiri’s acrobatic effort that went narrowly over the bar was the highlight of a drab first half and the second half was little better, with neither side able to find any cutting edge in attack.

Rodgers opted to remove Vardy after an hour as part of a triple change, with Iheanacho, James Maddison and Hamza Choudhury joining the action. 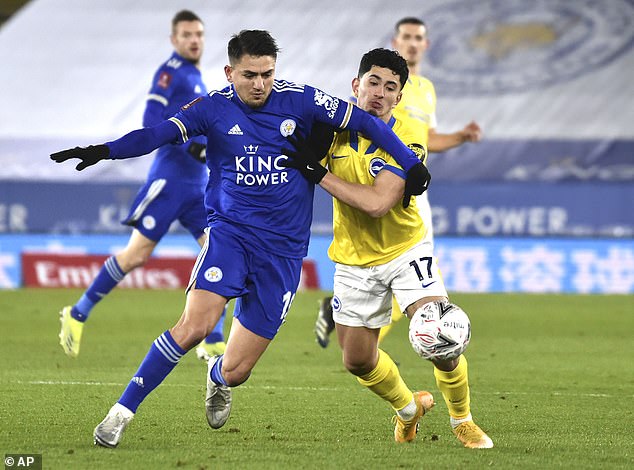 Cengiz Under (left) was lively and thought he had scored the winner, before it was chalked off 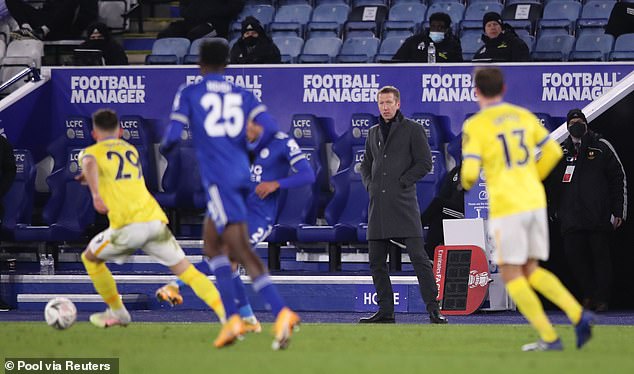 Both sides had the ball in the net within the space of three minutes, though neither effort was allowed to stand. Zeqiri had clearly moved too early before he collected Percy Tau’s pass and lifted the ball over Danny Ward, while at the other end Under smashed home from close range only to see the linesman’s flag raised because Iheanacho was offside when Maddison released him.

Then Justin, arguably Leicester’s best player this season, was carried off on a stretcher after falling awkwardly in trying to control a dropping ball. No opponent was near him.

Under went close again with time ticking away and then after Leicester won another corner, Iheanacho powered in Tielemans’ cross.

‘We are disappointed,’ said Brighton boss Graham Potter. ‘We were the better team but there were tired minds on pitch and we switched off at the corner.’ 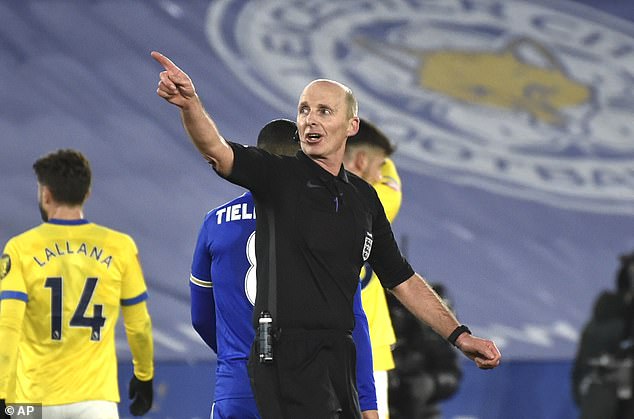 Mike Dean took charge of his first game since his controversial decision to send off West Ham’s Tomas Soucek against Fulham, one which was later overturned by the FA review panel 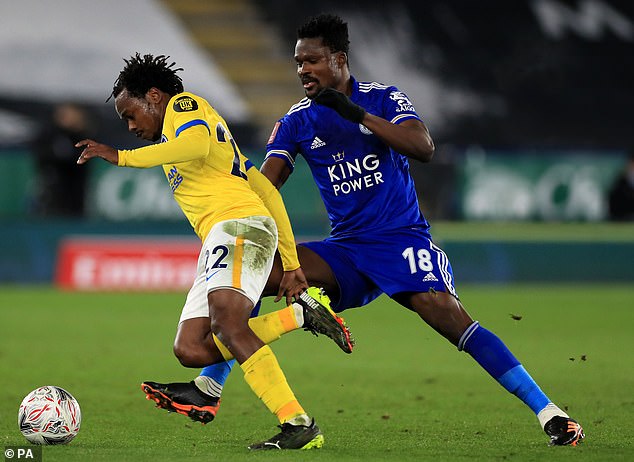