As we entered the final quarter of an hour at the King Power, it looked as though Leicester City were once again going to provide an antidote to much of the Premier League’s ills and set an example for those clubs straining to compete with the elite. Not invited to the Super League party, it appeared as though they would be gatecrashing next season’s Champions League regardless and potentially at the expense of one of this year’s finalists.

Instead, Brendan Rodgers and his players must console themselves after a late collapse confirmed another late-season collapse and their failure to secure a top-four finish. This 4-2 defeat by Tottenham Hotspur – who qualify for next season’s inaugural Conference League – was perhaps not as painful as last year’s final day disappointment. This time, Leicester started the day outside of the qualification spots and always needed a favour from elsewhere.

Yet after Jamie Vardy dispatched the second of two penalties at the start of the second half to establish a 2-1 lead and while Chelsea were falling apart away to Aston Villa, what had seemed unlikely felt eminently possible. In the end, though, it was probably not this defeat that cost them. Losing at Stamford Bridge last Tuesday, and dropping out of the top four after 242 days in position, was the real blow.

And that blow will be softened by the FA Cup win, of course, which means this is still very much a season of progress under Rodgers. There was no anger or despair directed towards the players from the 8,000 in attendance during stoppage time, even as Gareth Bale added his second and Tottenham’s fourth. Those who stayed beyond the final whistle were at least able to witness the parading of the Cup.

Maybe that achievement and the scale of the task at hand led to the strange end-of-term atmosphere around the King Power at kick-off, which was oddly relaxed despite the stakes involved. Leicester started with purpose but were not exactly pushing for the glut of goals required, wary of the threat Tottenham posed on the counter-attack. It took Vardy’s cute movement and running in behind to spread a faint sense of hope in the stands.

A quarter of an hour in, Toby Alderweireld was slow to anticipate Vardy’s step inside as he entered the penalty area and clipped him with his heel. Referee Anthony Taylor waved play on but would soon come to regret that decision. On the replay, it was hard to see how he missed a quite blatant penalty. He corrected himself after reviewing the pitchside monitor and Vardy’s rolled finish sent Hugo Lloris the wrong way. With Liverpool and Chelsea both still goalless at that point, Leicester were third. There was sudden belief, particularly as Tottenham were struggling to string a coherent attack together. But do you really need fluid, flowing play when you have Harry Kane chasing a Golden Boot? There was a warning for Leicester towards the end of a half, when Son Heung-min squandered a chance and squared to his strike partner for a tap-in, only for Caglar Soyuncu to block.

Kane would not be denied, though. Whether or not this will be his last outing for Spurs, he maintained an extraordinary scoring record against the last club he represented as a loanee some eight years ago. Kane’s 17th goal in 16 games against Leicester was a wonderful finish, powerful and on the volley after a spot of penalty area pinball. It took him one clear of Mohamed Salah in the scoring ranks.

Leicester needed a response. A ripple of appreciation for Aston Villa’s opening goal helped, but another penalty would do the trick. Again, Vardy won it and scored it, though this award was not quite as clean-cut. Davinson Sanchez certainly felt hard done by. Locking arms with the Leicester striker in a tangle for the ball was deemed enough for a spot-kick. Vardy went the same way. Lloris barely moved.

Some of the 8,000 couldn’t watch the kick and celebrated with relief. Others revelled in it, and enjoyed the news of Villa’s second against Chelsea just as much. That gave Leicester a degree of breathing room, but the lead would have to hold. Tottenham’s attacks were few and far between but were initially repelled, with Soyuncu heroically blocking a Son cross that was asking to be converted, then a Son free-kick drifting on target. 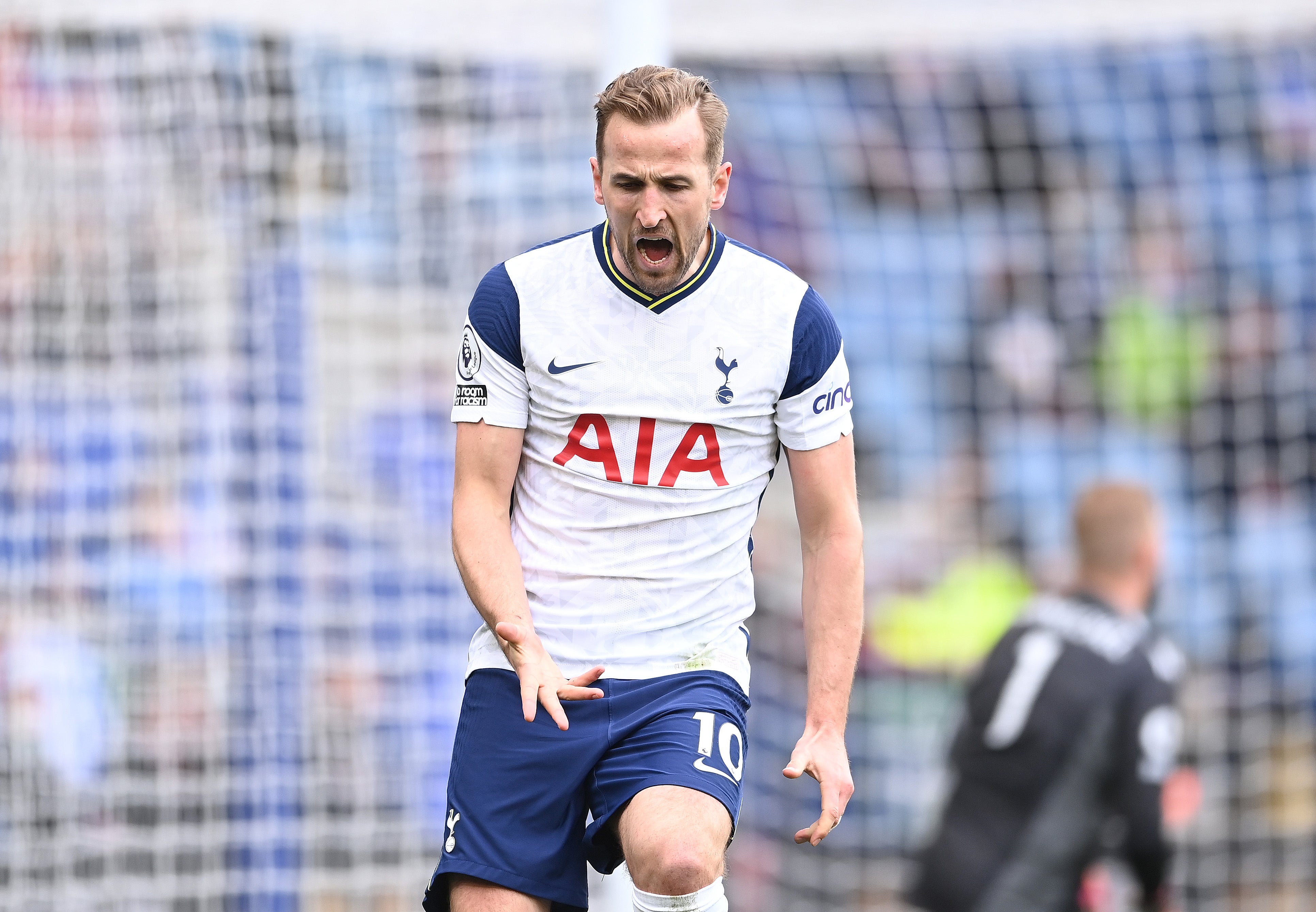 And yet from the resulting corner, chaos. Kasper Schmeichel’s saves were as important as Youri Tielemans’ wonder goal in winning the FA Cup, but he blemished a fine individual season right at its close by failing to catch Son’s in-swinging corner cleanly. His fumble under pressure from Sanchez pushed the ball over the line. Leicester’s players appealed for a foul, but neither Taylor nor VAR were interested.

From there, a valiant comeback felt unlikely. It was in fact Tottenham who rallied, picking holes in an opponent desperate to throw everything at them and leaving space to exploit. A brilliant move between Bale, Kane and Son ended with Kane forced wide by Schmeichel but cutting back to the edge of the area for Bale to fire into an unguarded net. With seconds left on the clock after five minutes added on, Bale then capitalised on a defensive mix-up to roll the ball past Schmeichel, onto the post and then tapped in on the rebound.

For Tottenham, this was a happy way to end an unhappy season. For Leicester, emotions are more mixed. Yes, this was another failure to reach European football’s top table, but this has not been a campaign without success.