Liverpool transfer target Thiago Alcantara appears to have shrugged off speculation linking him with a move to the Premier League. Manchester United are also interested in signing the Bayern Munich midfielder, but he downplayed the rumours on Thursday night.

Alcantara is one of the hottest properties in the summer transfer market.

The midfielder has told Bayern that he wants to leave, and is believed to have his heart set on a move to England.

Liverpool and United are both keen on signing the 29-year-old, who is valued at £27million by the German champions.

However, speaking after Spain’s 1-1 draw with Germany on Thursday night, he refused to get drawn into commenting on his future. 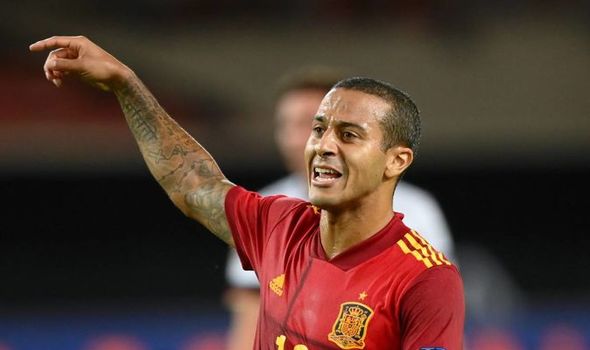 Walking out of his post-game interview, he was asked: “Liverpool or Manchester?”

Thiago laughed and replied: “Ciao!” before again being asked about his future.

He was then asked whether he would consider staying at Bayern next season, and he didn’t rule it out.

The midfield ace said: “Munich is my home and I’m so happy to be there.”

Liverpool are reportedly planning to offload Georginio Wijnaldum before they make a formal bid for Thiago.

The midfielder is a target for Barcelona – as is Thiago, though the Catalans are unlikely to move to bring him back to the club.

With Wijnaldum’s contract set to expire next summer, his current demands are driving a wedge between himself and the club.

And it seems selling him would work out well for all parties, as it would free up the funds for Liverpool to meet Bayern’s demands for Thiago. 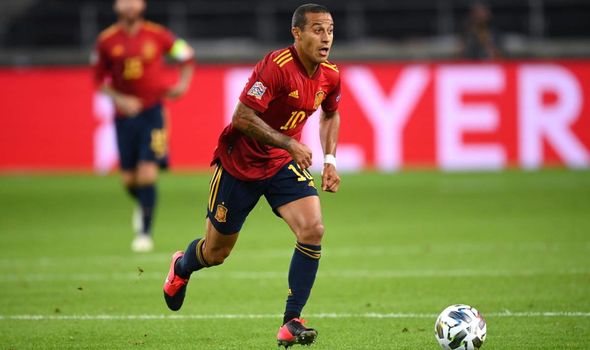 Former Reds player Jamie Redknapp believes Thiago would be a great signing for Liverpool and tipped the Spaniard to make a name for himself at Anfield.

He told Sky Sports: “We’ve often spoken about how good Liverpool’s midfield are, how hard-working they are, but sometimes they maybe lack that bit of finesse and that little bit of quality.

“Thiago would give them something completely different, he’s one of the best midfield players in the world. He dictates the play, plays at his own pace.

“Sometimes, especially when you go to tough places in the Premier League, you cannot beat teams by going 100 mph all the time, you need a little bit of finesse and for someone to do things differently.

“Many years ago Liverpool had midfield players like Ronnie Whelan and Jan Molby who could just slow the game down and play at a tempo that suited them, Thiago could do that.

“We saw him in the Champions League final where he completely bossed the game, had so many touches of the ball and made the game look easy.”