Liverpool star Takumi Minamino is not currently good enough to be a backup to Mohamed Salah, according to former Tottenham striker Darren Bent. Pundit Bent believes Liverpool need to build on last season’s Premier League title triumph by strengthening their squad in this transfer window. Jurgen Klopp has so far made just one signing this summer, with left-back Kostas Tsimikas joining from Greek giants Olympiakos.

Bent does not question the quality of Liverpool’s starting XI when they are all fit and available.

However, he used Minamino as an example as a potential replacement if Salah was injured.

Minamino scored his first goal for Liverpool in the Community Shield loss to Arsenal on Saturday but has struggled to make an impact since his January arrival from Red Bull Salzburg.

Bent says the likes of Manchester City are able to call upon players of equal quality in reserve, something he thinks Liverpool cannot do. 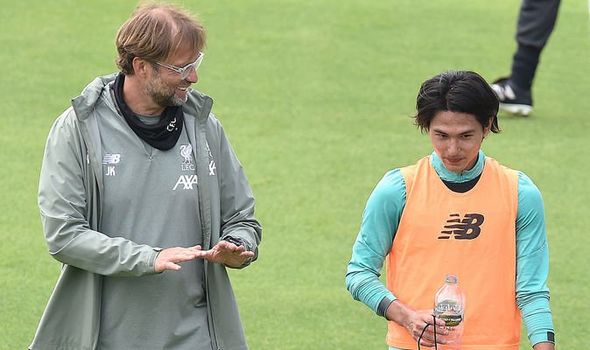 “The thing is with Liverpool, one to 11 they’ve got a very good team and deservedly won the Premier League, but they’ve not really added to that,” Bent told talkSPORT.

“You’ve got Thiago [Alcantara], I don’t know what’s going on [with that], but I would have thought that would be one they would have desperately done.

“Watching Liverpool against Arsenal, to me in certain areas they looked really tired, so I think Jurgen Klopp needs to address that sooner rather than later.

“I’ve heard people say ‘how can you improve on that 11? Who can you bring in to make them better?’.

“Well, I think they just need more strength in depth.

“If you look at Manchester City going forward, if Raheem Sterling is starting and he doesn’t play well and he comes off, they replace him with [Riyad] Mahrez or Bernardo Silva – there’s no real drop off [in quality].

“But you can’t tell me that when Salah is not playing well and they bring on Minamino, the levels are too different.

“I know Minamino scored at the weekend, it was his first goal, but for me he is nowhere near the player Salah is.”

Liverpool will start their title defence at home to newly-promoted Leeds United on September 12.

The match will be followed by a trip to Chelsea before Arsenal visit Anfield.