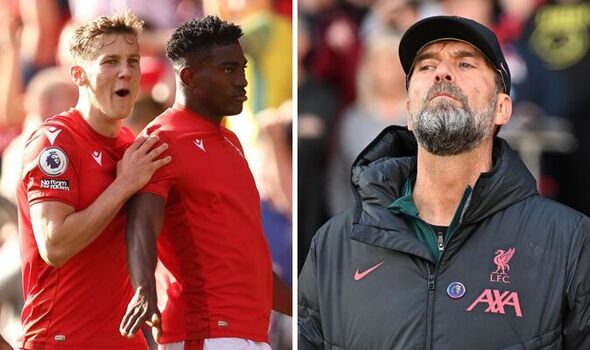 Liverpool lacked potency and paid the ultimate price for their toothless display on the banks of the River Trent as Nottingham Forest secured a rare 1-0 victory as Jurgen Klopp’s side’s early-season struggles continue. The Reds hoped they’d finally turned the corner after back-to-back 1-0 victories over Manchester City and West Ham but the attacking threat of Luis Diaz, Darwin Nunez and Diogo Jota was sorely missed.

Mohamed Salah barely threatened is an incredibly underwhelming personal display as Liverpool lacked a ruthless streak in front of goal.

They had plenty of notable chances – not least from Fabio Carvalho and Virgil van Dijk in the first half – but this was a day when Liverpool never really looked like scoring.

Joe Gomez cost his side dearly when he gave away a cheap after dwwardaling on the ball and Forest punished from the resulting free-kick when ex-Liverpool frontman Taiwo Awoniyi fired home the rebound after initially hitting the post.

Express Sport rates the Liverpool players on a miserable afternoon for Klopp’s side, who look set to lose further ground in the race for the top four…

Made two smart saves in the first half to deny Cheikhou Kouyate and Jesse Lingard. Couldn’t be criticised for the goal. Couldn’t do much more. Kept the scoreline down with a superb save from Ryan Yates.

Sturdy once again from the veteran. Put in some inviting deliveries, also overrun the ball several times. One of Liverpool’s best players. Unbelievable block to deny

At fault for the opening goal. Fell asleep and fouled Awoniyi, who later netted the opener from the resulting free-kick. Still looks a little shaky at times, giving away needless fouls.

Three of Liverpool’s best chances fell to the big defender but he couldn’t take them. Should have gone for goal in the first half when he headed across goal but the ball evaded Roberto Firmino.

He then turned wide from a Trent Alexander-Arnold free-kick before Dean Henderson was forced into an excellent low save from Van Dijk’s header from a corner. He will be kicking himself.

Solid performance on the left, didn’t do much wrong. Got forward well but link up with Fabio Carvalho was lacking. Great cross from Trent Alexander-Arnold that forced good save from Dean Henderson.

Not a great afternoon for the Brazilian. Didn’t stamp his authority on the midfield battle. Hasn’t been up to scratch this season.

Quiet display on his return to action. Ticked things over but did not threaten or create. Needs to do more if he wants to make it at this level. Can’t be too harsh as he has not played much football this season due to injury.

Bright spark for the Reds buzzing about the pitch. Always probing and looking to create. Still lacks a cutting edge. Had a shot at goal but comfortable for Dean Henderson.

Controlled brilliantly but couldn’t finish a clear-cut chance in the first half. Moments of promise but still looks a bit nervy and shy on the pitch.

Looked like he may have picked up a serious injury when he went down unchallenged but was eventually fine. Lost flight of the ball in second half when he could have controlled in box. Really poor display, barely got involved in play. Scuffed a shot in the first half and had a late header tipped over.

Headed wide from a corner in the first half, could have perhaps done better. Fairly quiet but did try to drop deep and make things happen at least. Subbed for Alex Oxlade-Chamberlain.