Liverpool manager Jurgen Klopp admits he struggled seeing the reputation of the club “trashed” in the wake of their abortive involvement in the now-failed Super League.

Owners Fenway Sports Group, led by John W Henry, were among the principal drivers of the project as part of the Premier League’s ‘big six’, and as a result have come in for huge criticism.

But Klopp, who has been outspoken on breakaway proposals for a couple of years, felt that should not have reflected as badly as it did on the historic institution that is the football club.

“It is difficult for me in truth, because I have found some of the reaction around it difficult to take,” he wrote in his programme notes for Saturday’s home game against Newcastle.

“And by this I don’t mean those who were against it or the protests. This was a great victory for football supporters – I want to make this clear from the outset. I agreed with their opposition. I made this clear to our owners.

“The part I have struggled with is seeing this club, a place I love and am now proud to call my home, trashed – and done so in a manner which suggests no redemption is possible. That I can’t take.

“It was right to take apart the concept and it was fair to criticise it, along with those who came up with it and also how it was presented. All legitimate in my view.

“The anger and disappointment was justified but there were times when the distinction between ‘club’ and this decision (and yes, those responsible for it) were too quickly blurred into one. To do so is an insult to the supporters in my view. And the players.

“This was a mistake. A big mistake. And it’s right they (FSG) take responsibility for it. But it doesn’t mean ‘the club’ should feel ashamed.

“The hundreds of employees who work here on Merseyside, be it Anfield, the AXA Training Centre, the Academy, Chapel Street, the stores and the countless other venues have earned the right to feel proud for how they serve this organisation.

“During the pandemic some of the most important work done in the name of LFC to help our community has come from our employees.

“We have had a rough time for many reasons recently but this particular episode is over now and we must heal.” 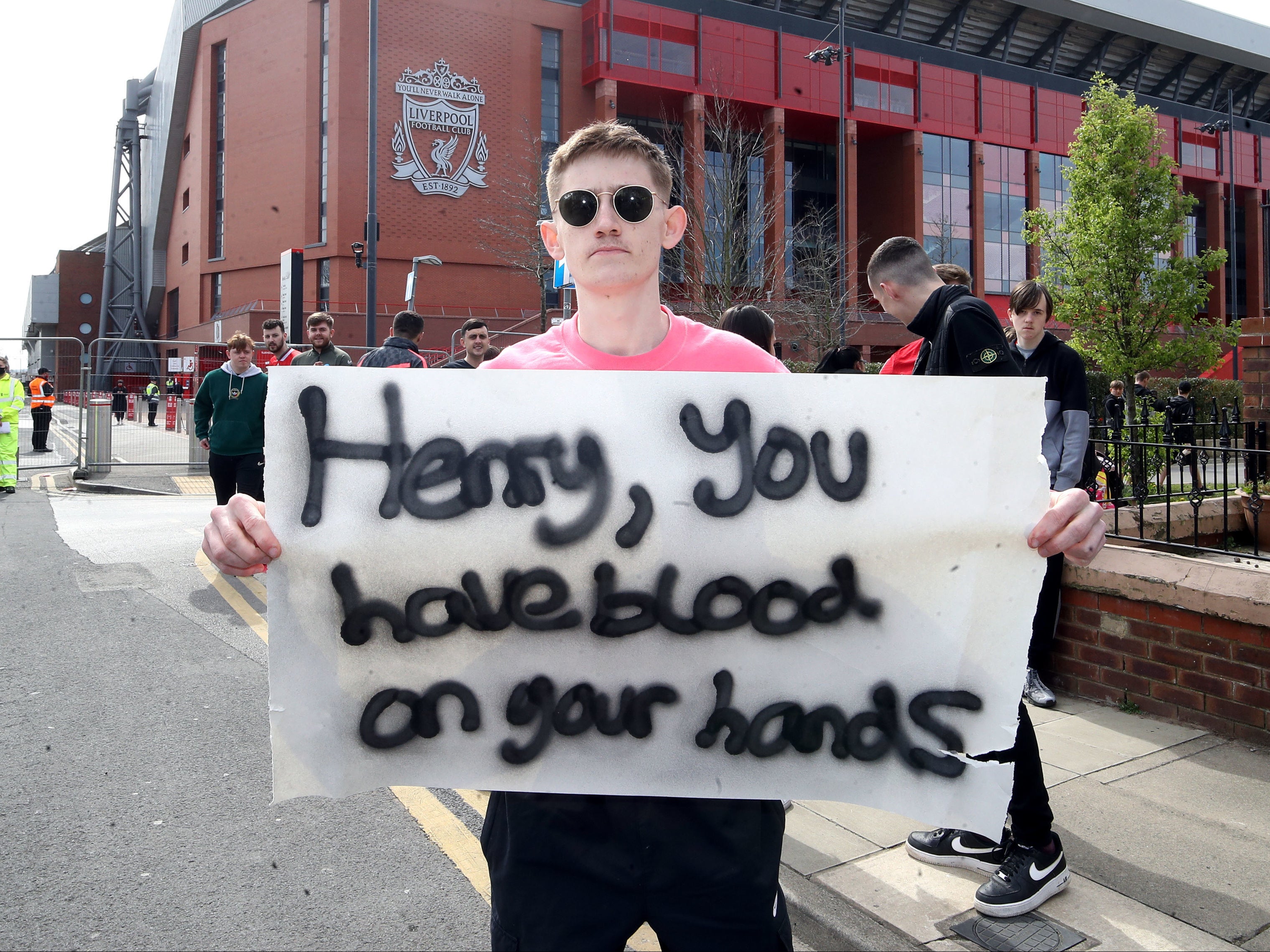 Only a handful of Liverpool fans turned out to protest at FSG’s ownership of the club ahead of the match against Newcastle at Anfield.

Unlike the scenes at the Emirates Stadium on Friday night, where the opposition to Arsenal’s owners was far more vibrant, Merseyside Police estimated there were about 150 supporters on Anfield Road awaiting the arrival of the team coach.

Of that number only a few had banners – with slogans such as ‘£nough is £nough FSG Out’ and ‘Henry, You have blood on your hands’ – expressing opposition to FSG and principal owner John W Henry.

When the Liverpool team bus arrived it was greeted by warm applause.

Liverpool captain Jordan Henderson, who began mobilising his own team-mates and also liaised with other Premier League skippers, felt it was important they made their voices heard.

“Being critical of my own employers isn’t something I do easily,” he wrote in his programme notes. “You keep these sort of feelings ‘in-house’. Unfortunately with this it wasn’t possible or appropriate.

“It’s why we as players spoke with a collective voice on Tuesday night. This wasn’t an act of defiance – it was just being honest and our ownership respected that.

“People can disagree with me saying this but my opinion is that our owners have been good for Liverpool.

“My opinion is built on my own first-hand experiences, from the enormously privileged position of being a player and captain of this football club.

“What matters now, for the team and the club, is that our relationship with our supporters is strengthened on the other side of this.

“We must make sure we protect the close bond that’s been so critical in bringing the success we’ve enjoyed over the past few seasons. The bond between fans and players.”