The Sky Blues dominated possession and territory at McDonald Jones Stadium but were made to do it the hard way by the Jets, who defended stoutly and took a surprise lead on the cusp of half-time through Tara Andrews. 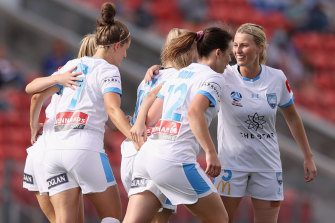 But after Taylor Ray levelled the scores three minutes into the second stanza with a curling left-foot strike from the edge of Sydney's penalty area, another goal felt inevitable.

And so it proved in the 76th minute, when substitute Rachel Lowe took a first-time swipe at a lay-off from Mackenzie Hawkesby after a period of sustained pressure for the visitors.

One-cap Matilda Lowe's effort at first looked like it would sail well over the crossbar but dipped late, catching Jets custodian Claire Coelho just off her line.

It was a deserved win for Sydney, who also had a stonewall penalty shout turned down by referee Isabella Libri moments before half-time on star striker Remy Siemsen.

The Matildas hopeful was clipped on the back of her ankle by Newcastle defender Chloe O'Brien, who was trying to clear the ball but missed it completely and brought down Siemsen instead.

Despite being clearly overwhelmed in defence for much of the match, it was still a gallant showing from the Jets, who have one of the thinnest squads in the W-League and endured a tumultuous pre-season due to the club's recently resolved ownership crisis.

They took the lead in the 41st minute – against the run of play – when Andrews trickled the ball past Jada Whyman into the bottom-right corner after Sydney failed to defuse a recycled free kick that was allowed to bounce around the box.

Andrews came very close to making it 2-2 in the 90th minute from a free kick, after a Hawkesby handball, but her powerful attempt drifted just wide.

The Sky Blues will aim to make it three from three next weekend in Saturday's derby against the Western Sydney Wanderers at Stadium Australia.