A 43-year-old man has been charged in connection with allegedly posting a racist comment on Facebook towards former Kilmarnock manager Alex Dyer.

The message was posted on January 31 – a day after Dyer parted company with the Scottish Premiership side. Kilmarnock say fans reported the message to the police.

A man has been charged and the case is being considered by the Procurator Fiscal.

A Police Scotland spokesperson told Sky Sports News: “A 43-year-old man has been charged in connection with offensive communications posted online. A report has been submitted to the Procurator Fiscal.”

Kilmarnock director Cathy Jamieson wrote about the incident in her Killie Trust monthly report. She said: “We pride ourselves on being an inclusive community club, welcoming people irrespective of their backgrounds, race, gender identity or disabilities. 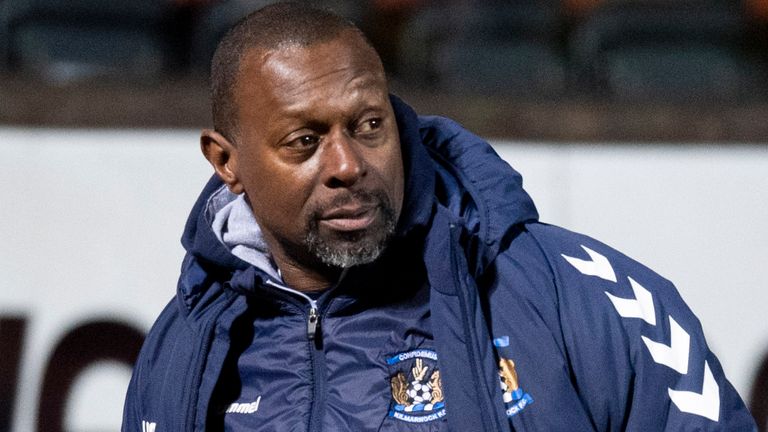 “Following the racist abuse contained in a letter to former manager Alex Dyer, we were angry and disgusted to see a further racist comment aimed at him appear on social media.

“This was reported to the police by Killie fans and I understand that the individual has been identified and reports made to Procurator Fiscal. We do not believe the person involved in this incident was a Kilmarnock FC supporter.

“We are pleased to be continuing a positive relationship with Show Racism the Red Card, and our players taking a knee before matches shows our support for Black Lives Matter campaign.”

Sky Sports is committed to making skysports.com and our channels on social media platforms a place for comment and debate that is free of abuse, hate and profanity.

If you see a reply to Sky Sports posts and/or content with an expression of hate on the basis of race, colour, gender, nationality, ethnicity, disability, religion, sexuality, age or class please copy the URL to the hateful post or screengrab it and email us here.

Kick It Out reporting racism

Online Reporting Form | Kick It Out

Kick It Out is football’s equality and inclusion organisation – working throughout the football, educational and community sectors to challenge discrimination, encourage inclusive practices and campaign for positive change.