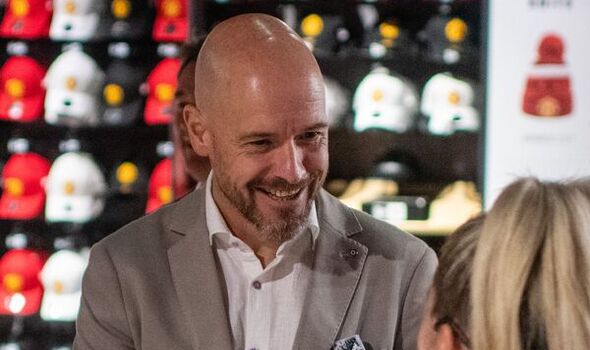 New Manchester United manager Erik ten Hag has allegedly already made a big impression on staff at the club after personally introducing himself to each member of the team during a lunch in the canteen at Carrington.

The Dutchman was confirmed as the new permanent boss at Old Trafford late last month, and he has wasted no time in getting to work, starting his role early in a bid to turn around the Red Devils’ woeful recent fortunes.

Ten Hag will be all too aware of the huge job he has on his hands after United suffered their worst season in the Premier League era under Ole Gunnar Solskjaer and Ralf Rangnick, picking up just 58 points and finishing in a lowly sixth position.

All was clearly not well behind the scenes, with rumours of a broken dressing room and a number of players desperate to depart. Ten Hag is clearly already trying to improve morale, however, and according to the Manchester Evening News, that has begun with his efforts to bond with behind-the-scenes staff.

According to the publication, Ten Hag caused a ‘real buzz’ as he went from table to table in the canteen introducing himself and taking a ‘genuine interest’ in those who he met and their role at the club. It is claimed that he even made a big effort with the more ‘introverted’ workers, and made everybody feel like ‘a million dollars’.

He also told one staff member how impressed he had been with the United away support after he watched their 1-0 defeat to Crystal Palace at Selhurst Park on the final day of the season, and the ex-Ajax boss certainly appears to be saying all the right things to get the fans on his side.

All attentions will now turn towards the summer transfer window, with Ten Hag no doubt desperate to strengthen and build a team in his mould. United have already been linked with a number of his former players, such as Barcelona midfielder Frenkie de Jong and Ajax defender Jurrien Timber.

United’s CEO Richard Arnold has called for patience with Ten Hag, and has admitted that the club will not be able to achieve success overnight under him. “Suffice to say we are not happy with where we are in terms of performance on the pitch,” Arnold said. “We understand fans are frustrated and want to see change and improvement and I can assure you that we share that frustration very intensely within the club.

“We also feel confidence that change is coming because of the action being taken to drive long-term success. The appointment of Erik ten Hag was the most visible example of that action and the most important. Success won’t be achieved overnight but we are determined to get there.”