Ferran Torres struck twice as Manchester City piled on the misery for Mikel Arteta with an emphatic 5-0 win over 10-man Arsenal at the Etihad Stadium.

Pep Guardiola’s champions never looked back after taking a 2-0 lead inside the opening 12 minutes of a one-sided Premier League encounter with goals from Ilkay Gundogan and Torres.

The Gunners then capitulated after the sending off of Granit Xhaka with Gabriel Jesus Rodri and Torres completing the rout.

The result left the Gunners bottom at full-time, still without a point from their opening three matches of the new league campaign, with pressure mounting on their manager – Guardiola’s former assistant Arteta. 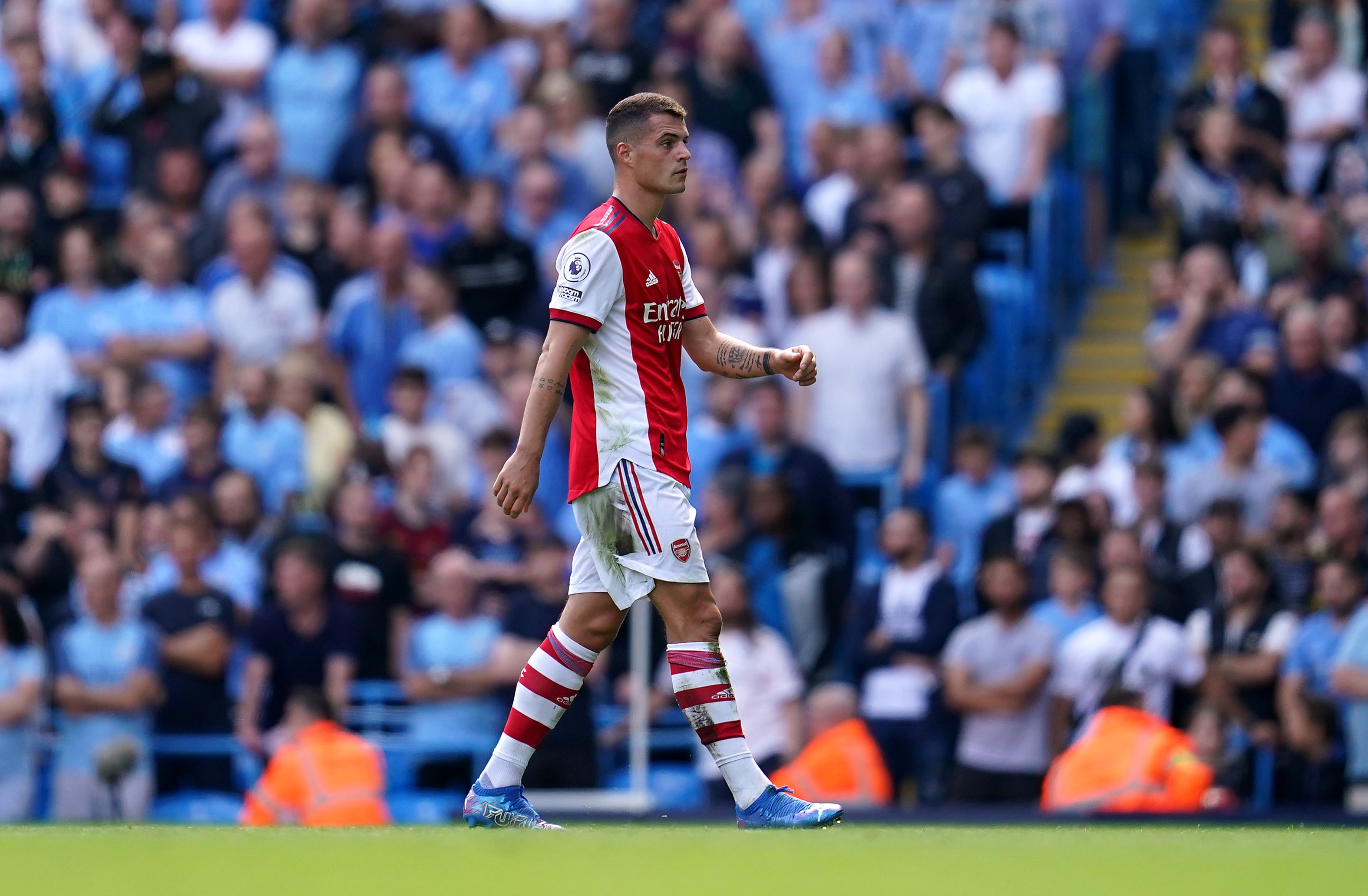 For City, their opening-day loss to Tottenham is now firmly behind them. Their week may have been dominated by their high-profile pursuits of Harry Kane and Cristiano Ronaldo ending without success, but for a second game in succession they hit five without an established centre forward.

Admittedly, on this occasion, they were helped by some poor Arsenal defending. City unveiled sculptures of Vincent Kompany and David Silva before the game and jokes soon circulated that Arteta might have been better off with either statue in his side.

City took instant command. Jesus and Torres appear to have done a job swap with the Brazil striker featuring in a wide role for the second successive game and winger Torres starting in the centre.

The roles appear to suit them with Jesus, fresh from providing two assists against Norwich last week, providing the cross for Gundogan’s opener on seven minutes. Jesus picked out the German with a well-flighted ball from the right and Gundogan met it with a powerful header at the back post.

Torres may not possess the threat of Kane or Ronaldo but he showed his eye for goal last season and again he was on hand as City doubled their lead.

Arsenal’s defence switched off as a free-kick was taken short. Bernardo Silva was unchallenged as he clipped the ball into the box and, after Cedric Soares missed it, Torres was left with a tap-in.

It could have been three after another incisive move soon after but this time Torres’ shot from a Jesus pass was off-target.

The only way Arsenal were likely to get back into the game was from a City mistake and that almost transpired when Emile Smith Rowe charged down a pass from a casual Ederson but the rebound rolled wide.

Things went from bad to worse for the Gunners when Xhaka was given his marching orders on 35 minutes. Referee Martin Atkinson showed a straight red card after the Switzerland midfielder jumped into a two-footed challenge on Joao Cancelo.

Their woe was further compounded two minutes before the interval when Jack Grealish cut into the box and set up Jesus, who took a touch and then rattled in the third.

City were in no mood to ease up after the restart either and a fourth seemed inevitable as they applied persistent pressure. 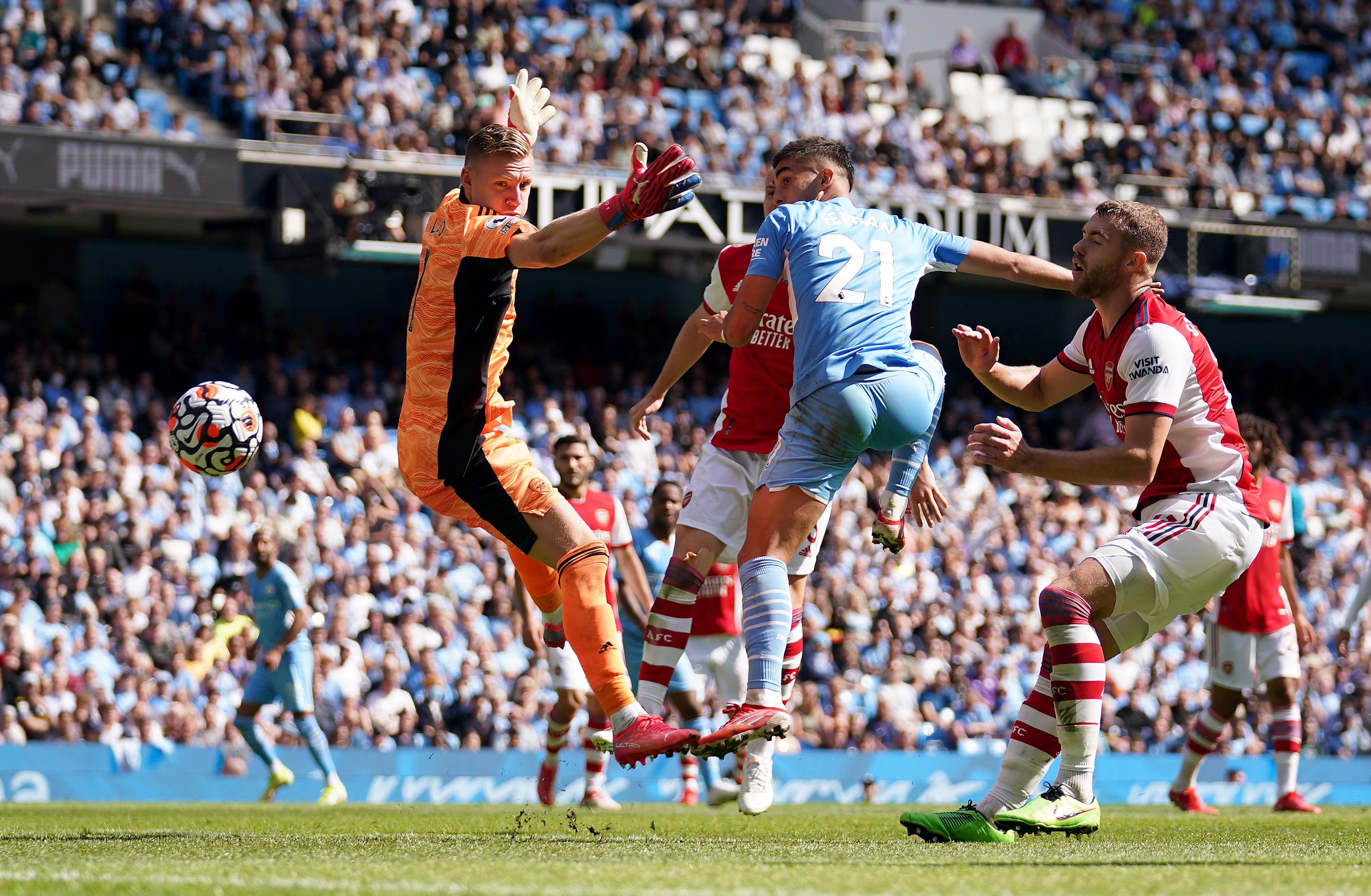 It came on 53 minutes, with Rodri this time the man on the scoresheet. The Spaniard expertly side-footed into the bottom corner from 25 yards as the Arsenal defence was again caught out.

The pressure continued with substitute Raheem Sterling forcing a save from Bernd Leno and then curling another effort wide.

Torres claimed his second six minutes from time when he glanced in a header off the post from a Riyad Mahrez cross to complete Arsenal’s misery.