Gary Neville likened the methodical way Manchester City disposed of Arsenal to boxer Floyd Mayweather as they made it 18 straight wins.

Speaking on the Gary Neville Podcast, Neville said the win reminded him of a Floyd Mayweather fight, taking an early lead and holding onto it by suffocating the opponent in a methodical way.

Neville also believes that City’s previous problems – being caught in possession with too many players upfield – are now less prevalent.

“If you think back over the years, we know Pep’s teams are built on possession, but when he has been most successful, he has had great defensive records.

“I thought Man City’s weakness last year was that when they kept the ball high up the pitch – which they’ve always done with Pep Guardiola – the problem is they were allowing teams to cut back through them too easily. But they are sustaining attacks again.

“I used the word suffocation because the two full-backs press in, Joao Cancelo comes inside, Oleksandr Zinckenko comes inside, Fernandinho is there, and they’ve got that block of five players, two at the back, three in front. So when any team wins it back, they’ve got nothing to go back through.

“They’re so aggressive, so connected, compact on the ball and out of possession. It’s brilliant to watch. It’s methodical.

“It almost became too easy for Manchester City at Arsenal. I used the Floyd Mayweather expression, because it was like City had won the first three rounds, got in front, and then just jabbed for the next nine rounds.

“To be able to do that is special. I remember when we played games away in the Premier League, in many games that we won 1-0, it was always an onslaught in the last 10 minutes. But Pep Guardiola’s side win games without that onslaught. It’s really special, and the bravery in that defence is fantastic.”

Arsenal made five changes from the Europa League round of 32 first leg draw in Benfica in midweek, and Neville believes the selection shows where Mikel Arteta’s priorities lie for the remainder of the season.

“The teams he picked against Leeds and Benfica were the same team, so you’d say that’s his strongest side. But I think the message would have been sent loud and clear: he’s changing it today, and his strongest team will be back in against Benfica.

“Arteta could have made the five or six changes against Benfica and prioritised the game against City. In not doing that, he sends the message to the players about what the priority is, the competition he feels will bring the greatest success this season.

“It tells you he has written off the chance of getting the top four, which is probably right. I don’t think Arsenal will get there.” 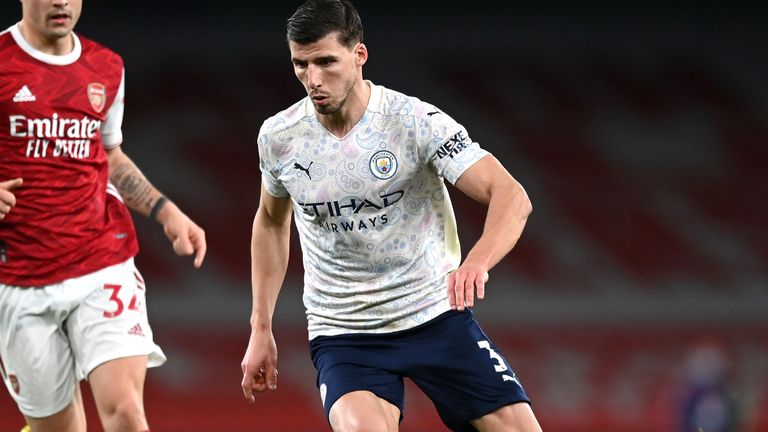 There was a feeling at Manchester City they would never see the like of Vincent Kompany again when he hung up his boots. Well, not only have they replaced him they may just have surpassed him with the talents of the imperious Ruben Dias, who was magnificent as City made it 18 wins in a row in another defensive masterclass performance against Arsenal.

Jamie Redknapp called him “phenomenal” in the aftermath while Gary Neville awarded him the man-of-the-match award, saying: “It was an absolutely fantastic performance again. I thought that (Aymeric) Laporte would be the rock of this defence for many years to come but Dias is turning out to be the star man. We asked how they would replace (Vincent) Kompany. Well, watching Dias week-in, week-out, he’s so young, physically brilliant, great on the ball, and he has got real leadership qualities. He was outstanding today.”

Talk has been relatively quiet surrounding the PFA Player of the Year vote, which is undertaken by the professionals in the spring, but Bruno Fernandes is seemingly the hot favourite. Yet, it will surely to be hard to pick against a player from a club that is cantering towards the Premier League title with the potential to break all defensive records in the process. It’s 11 clean sheets now and just two goals conceded in 13 Premier League starts alongside John Stones for the brilliant Dias. They are quite the pairing.

Is it possible for a defensive player to receive the votes from his peers for the award? History does suggest it’s tough but doable. Virgil van Dijk was the most recent winner in 2019 while N’Golo Kante edged out the more obvious case for Eden Hazard in the 2017 award. Dias deserves a shout.