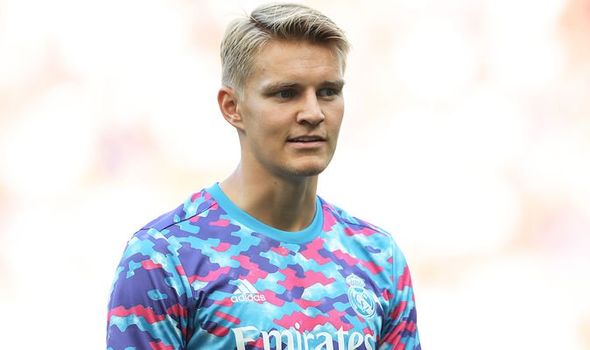 Martin Odegaard has ‘chosen to leave’ Real Madrid and Arsenal could complete a deal ‘in the next few days’, according to reports from Spain. Odegaard has been a top target for Arsenal throughout the summer window. The Norwegian impressed Mikel Arteta in his loan spell in north London in the second half of last season.

Odegaard was expected to fight for a spot at Real under Carlo Ancelotti.

However, he has been left out of the club’s squad list ahead of the La Liga opener against Alaves this weekend and not been given a shirt number.,

Spanish outlet MadridstaReal now claims Odegaard has chosen to leave and Real will facilitate his departure.

Arsenal are expected to make a permanent offer for the 22-year-old.

Sergio Santos, writer for Spanish newspaper AS, says Arsenal will complete a deal in the ‘next few hours/days’.

Arsenal boss Arteta has prioritised the signing of a No 10 this summer.

Leicester star James Maddison has been linked with a move to the Emirates.

Lyon’s Houssem Aouar is once again rumoured to be a target.

But Fabrizio Romano says Odegaard has always been the preferred option for Arteta and technical director Edu.

Following the final day of last season, Arteta made it clear he wanted to bring the Norway star back to the club in some capacity.

Arteta said in May: “Well we have a very clear and strong opinion on what we would like to do. He’s not our player.

“We’ll have discussions in the next few weeks, but first of all we need to respect that he’s a Real Madrid player. We’ll have those communications.

“We’ve tried to make everything that we could to get Martin performing for the team, which I think he’s done, and he has adapted really well to our way of playing and to our football club.

“Hopefully we have given him the hope and the feeling that this could be a good place for him.”

Arsenal have made three signings so far this summer in Nuno Tavares, Albert Sambi Lokonga and Ben White.

But ahead of the season-opener against Brentford, Arteta said plenty can happen between now and the end of the window.

“Anything is possible and there is still a lot of things to be done and a lot of clubs involved and you can see that things have started to move at a different speed in the last week or so.

“It’s been a really difficult transfer window and probably a lot of things will happen in the last week or so.”