The rise of the Matildas as one of the country’s top sporting teams means Football Australia is no longer as reliant on the Socceroos qualifying for World Cups as it once was, according to chief executive James Johnson.

Graham Arnold’s men are precariously placed on the road to next year’s World Cup in Qatar. A winless run of three matches against Japan, Saudi Arabia and China has hurt their chances of direct qualification. 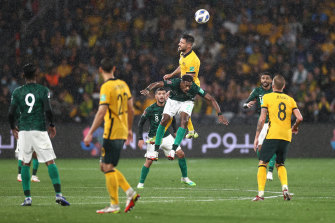 Mathew Leckie rises for a header during the stalemate with Saudi Arabia earlier this month.Credit:Getty

However, Johnson still expects them to make it to what would be Australia’s fifth consecutive men’s World Cup appearance – even if they have to go the long way, as they did last time under Ange Postecoglou, by navigating the tricky intercontinental play-offs.

If they do, it will be worth $US12 million ($16.6 million) to Football Australia, with the prospect of even greater prizemoney if the Socceroos progress out of the group stage.

But although in the past the sport was almost entirely dependent on the Socceroos reaching World Cups – to boost not only FA’s coffers, but football’s standing in a crowded domestic market – Johnson believes it is now perfectly placed to ride out what he described as a “doomsday” scenario for the men’s national team.

Much of that is largely down to the Matildas, who are on track to break their all-time home attendance record on Saturday afternoon when they host the United States. The number to beat is 33,000, set during the Sydney Olympics, but FA has already sold about 28,000 tickets for the clash at Stadium Australia. Newcastle’s 33,000-seat McDonald Jones Stadium is also on track for a sellout for Tuesday night’s rematch. Captain Sam Kerr – who was on Tuesday nominated for FIFA’s Best Women’s Player award for the fifth time – and many of her teammates have also become major drawcards. 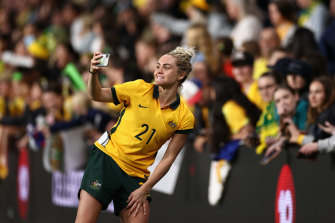 Ellie Carpenter of the Matildas poses with fans after the friendly against Brazil in Sydney last month.Credit:Getty Images

And six months after the Qatar World Cup, which is being played across November and December next year, Australia and New Zealand will co-host the 2023 Women’s World Cup.

“We wanted to ensure that we weren’t only relying on the Socceroos qualifying for the World Cup every four years. And I think we’re starting to see that vision come to life,” Johnson said.

“You’re seeing the Matildas, who played Brazil recently – they broke record numbers for broadcast in the last window, and even if we go back to the Olympics earlier this year, they were breaking broadcast numbers. There’s matches against the United States … we are expecting to break more records.

“What that illustrates is a rising brand that’s becoming more and more relevant every time they play. I think we’re in a great position, our vision’s been brought to life, we’ve got lots of areas in the game that are firing, and that’s what we need. Therefore, if doomsday happens and we were not qualified for Qatar 2022, there are other parts of the game that will support growth.” 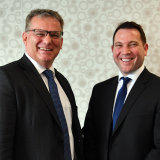 FA held its AGM on Tuesday, which saw Chris Nikou re-elected as chairman and Carla Wilshire become his deputy. The organisation has also posted an $11.8 million surplus for 2020-21 – $10.2 million of which comes from the unbundling of the A-Leagues. It continues an impressive financial recovery for FA, which inked a $100 million broadcast deal with Channel Ten this year and has signed up several major sponsors in recent months, including the Commonwealth Bank, the Matildas’ new naming-rights partner.

“Unbundling creates a new environment and we want each part of the ecosystem to be the best it can,” Nikou said. “Our obligation now is to do that – let the clubs run the elite competition, men and women, while we focus on community, grassroots, pathways, national teams. I think that type of focus means there should be more success stories down the track.”

As for the Socceroos, they will learn on Saturday morning (AEDT) exactly what the intercontinental play-off path to Qatar looks like when FIFA conducts its draw in Zurich. If they finish third in Group B, and then beat the other third-placed team in Group A, they will face a team from South America, Oceania, or North and Central America in a sudden-death single-leg match at a neutral venue.

Ordinarily, the play-off matches would be played home and away over two legs, but FIFA last week confirmed it was condensing its schedule due to the pandemic.

Johnson is confident it won’t come to that, and believes Australia will beat Vietnam (home) – the venue for which FA will confirm in the coming weeks – and Oman (away) in the next international window in late January.

“We’re expecting six points for those matches,” he said. “Japan and Saudi will also play against each other during that window, so if we get six points, there will be movement, and that sets up a real interesting March window when we play Japan here and Saudi away. So I don’t think there’s anything to be concerned about at this point, I think we’ve got every chance of going through directly, and if we don’t, we will be playing in June in play-offs, which we’re confident we can do as we did in the last qualifiers in 2018.

“If we were not to qualify, the game would be in a strong financial position, so there’s nothing to worry about. But we shouldn’t be disheartened at this point.”

Watch Messi, Neymar, Ronaldo and football’s biggest superstars in the UEFA Champions League with every match streaming ad-free, live and on-demand only on Stan Sport from this Wednesday 15 September.