Paris Saint-Germain head coach Mauricio Pochettino insists the Champions League semi-final against Manchester City is not a personal battle between him and Pep Guardiola.

Pochettino is aiming to lead the French club to their first Champions League title – an objective Guardiola has also held since he took charge of the Premier League leaders in 2016.

The former Tottenham boss once described comments by Guardiola about his then side’s reliance on Harry Kane as “very disrespectful” in 2017, but Pochettino sought to praise his counterpart ahead of Wednesday’s first-leg in Paris.

“It is one team playing another, not a personal battle. It is going to be a battle between two very good teams,” Pochettino said.

“When you talk about Pep Guardiola you are talking one of best coaches in the world, if not the best. I admire him a lot and not only because of the titles he has won.”

Pochettino’s Spurs memorably beat City in the Champions League quarter-finals two years ago on their way to the final but he says that result can’t be used to his advantage.

“There’s nothing you can take from two years ago,” said Pochettino, who took charge of PSG on January 3.

Pochettino added: “I think Manchester City is one of the greatest teams in the world, with the best coach. If it is going to be tougher than Bayern Munich, we will see.” 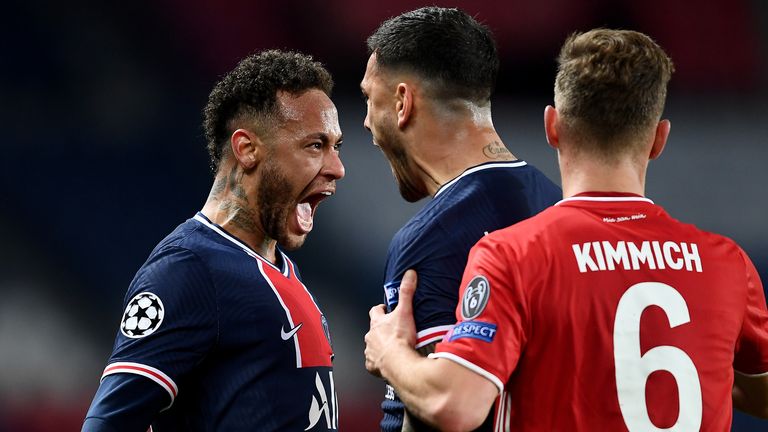 Meanwhile, influential forward Neymar says his priority is to help the French club, who sit second in Ligue 1, realise their goal of winning Europe’s top-tier club competition rather than personal achievements.

“We are going to do everything in our power to beat Manchester City. I will do everything, professionally speaking, to win this game,” Neymar said.

“My main objective is the Champions League and not the Ballon d’Or. That is not my main priority.

“In the future, I need to be able to remember that I have won the Champions League once, twice or maybe three times.”

Neymar, who is approaching the final two years left on the deal he signed with PSG in 2017, says he has never been happier at PSG amid reports of a new contract extension.

“I am most happy this season. This year PSG has really improved and we have worked a lot to keep improving. We really want to win the Champions League.”

Follow Paris Saint-Germain vs Manchester City via our dedicated live blog on Sky Sports website and app on Tuesday; kick-off at 8pm