Melbourne City finished an A-League game with 10 men for the second match in a row but unlike last Tuesday, when they hung on to win in Brisbane, crashed to a 2-0 defeat against Adelaide United.

Adelaide took their first win of the new campaign in what was not a match that City captain Scott Jamieson will want to recall any time soon.

He had been booked earlier in the game, and when he brought down Yaya Dukuly, on the edge of the City area with 25 minutes remaining, he took off his armband and began the walk to the sideline before being shown a red card, knowing his fate was sealed.

From the resultant free kick, Adelaide midfielder Louis Darrigo found former Socceroos striker Tomi Juric, who peeled away and drove a low shot to beat Tom Glover's dive. It was a well rehearsed move which was executed perfectly and left City with a mountain to climb.

A difficult task became near impossible soon after when the Reds doubled their advantage, their own captain, Stefan Mauk, driving through from midfield and playing a one-two with teenage substitute Mohamed Toure before scuffing a deflected shot past Glover.

Adelaide coach Carl Veart fielded an unchanged line-up to the one that impressed in the season opening goalless draw with Western United in Geelong last Monday. 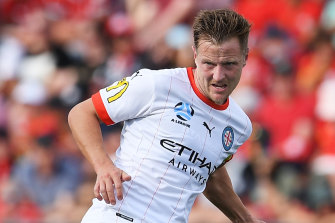 Rookie City boss Patrick Kisnorbo made two forced changes from the team that won in Brisbane, with Florin Berenguer and new signing and A-League debutant Marco Tilio coming in for the suspended Adrian Luna and the injured Andrew Nabbout.

It was the two City new boys who first combined inside five minutes, with Berengeur getting free to slide a pass across goal which could not find Jamie Maclaren.

Socceroos frontman Maclaren then drew an excellent low save from former City youth keeper James Delianov, who moved to SA this season to pursue first team action after a season as back up at Western United.

Delianov had to dive high to push Tilio's long-range drive over the bar, after the ball bounced to the teen from a corner in the 13th minute, while at the other end, Adelaide's youngster Dukuly's positive run threatened until Jamieson blocked his shot.

Juric went down in the penalty area and the ball fell to Adelaide defender Ryan Strain, whose shot was blocked while Ben Halloran, playing his 100th A-league game, flashed an effort wide. 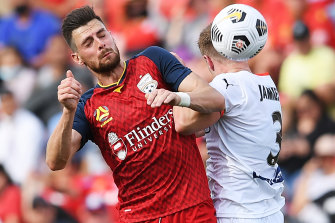 City then had their best chance of the first half when Connor Metcalfe slid an inch perfect pass through to Maclaren, Delianov getting down quickly to save well.

It was end to end stuff with neither side prepared to sit deep and surrender possession, so the pattern continued, with Dukuly firing wide after Halloran and Mauk linked up before Berenguer's shot was easily saved by Delianov.

Strain had to go off with injury, replaced by another ex-City man in veteran defender Michael Marrone.

Delianov gave away the ball a couple of times early in the second period and was lucky when Maclaren did get the ball in the back of the net, only for it to be ruled out for offside.

The tempo of the game slowed as both sides dug in, wanting to win but also wanting to make sure they didn't lose.

Juric stung Glover's hands with a shot after he beat off City defender Curtis Good, while Halloran saw another effort off target.

The game was still very much in the balance until Jamieson's rash challenge gave Adelaide the opportunity, which they took with open hands, inflicting on Kisnorbo the first defeat of his tenure as City's head coach.