Melbourne City took a huge step towards securing second spot on the A-League ladder with a comprehensive 2-0 win over Premiers' Plate winners Sydney, putting down an important marker should the two clubs meet in the A-League grand final in a month's time.

English winger Craig Noone broke the deadlock after 57 minutes, and Jamie Maclaren sealed the win with a goal 11 minutes later. It was his 19th of the season and put him in front in the race for the Golden Boot.

City might have spent longer in lockdown than any other club, but the pace, precision and verve they displayed, particularly in the opening 45 minutes of their restart, quickly dispelled any notion that they had been in hibernation. 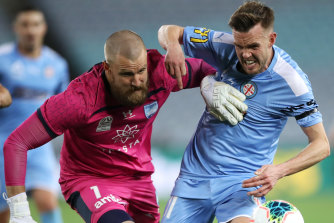 The fact that they were unable to translate their territorial advantage in the opening half was largely down to one man – Sydney goalkeeper Andrew Redmayne, once City's shot stopper but these days established as the champions' undisputed number one.

City dominated for most of the 90 minutes but found Redmayne, in that first half in particular, an impenetrable barrier.

Coach Erick Mombaerts has used the COVID-19 hiatus to drill his players in the passing, pressing game he has wanted to implement all season, and they have clearly embraced his philosophy with enthusiasm.

City harried, chased and prevented Sydney's creative players like Milos Ninkovic and Alexander Baumjohan from having the sort of impact they normally do.

And they got their pacy, wide men and forwards – Lachlan Wales, Adrian Luna and Noone – involved on the flanks as often as they could, with Frenchman Florin Berenguer drifting in from deeper midfield positions to support Maclaren in attack.

City made their intentions clear right from the start, when Luna found Maclaren with a second minute cross which the striker headed straight at Redmayne.

The Socceroos frontman went close in the 13th minute when he was played in by Berenguer, Redmayne denying him with a diving save at the near post.

Redmayne was in action soon after, pulling off perhaps his best save of the first 45 minutes when he denied Noone's well-struck, half volley after the City winger had won the ball in a headed duel with Paulo Retre.

Berenguer again went close when his shot from a Luna cross was somehow kept out by Redmayne, who was a relieved man to see the ball spinning away to safety just past the post.

Sydney, stung by being second best, began the second period in brighter style. Luke Brattan – who had also spent several seasons at City before joining Sydney – tested City keeper Tom Glover with a dipping volley shortly after the restart.

But City got the goal their pressure deserved in the 57th minute through Noone. Retre was out of position as Luna's cross drifted over from the right but Noone was alive to the opportunity, got to the ball before Redmayne and slotted home.

Sydney could have got straight back into the game two minutes later when the normally reliable Kosta Barbarouses was set up by an Adam Le Fondre cross, only to scuff his shot badly.

With 22 minutes remaining, Sydney defender Ryan McGowan was bundled off the ball by Maclaren, who finished with a flourish, firing past Redmayne with the outside of his boot.

Things will be different if they do meet in the finals, but this was for Mombaerts' side an important statement of intent.