A furious Mikel Arteta called Nicolas Pepe’s conduct “unacceptable” after the Arsenal winger was sent off in the Gunners’ goalless draw at Leeds United.

Arteta handed Pepe just his second Premier League start of the season but he failed to take his chance, incurring the wrath of his manager by seeing red.

Arteta fumed: “Considering how early we got Pepe sent off we have to take it. I never like a draw but in the circumstances, it’s a point. It is unacceptable.

“The first half there were two different periods. The game broke a bit, we started to give the ball away and led to them having the space to break. The second half it was a matter of defending well and staying patient and using the pace of our players in the space they were leaving.”

Former Arsenal interim boss Freddie Ljungberg had worked with Pepe during his spell in charge and was disappointed that the winger could not make the most of his opportunity to impress Arteta.

Speaking in the Sky Sports studio, he said: “With what the rules are today, he can’t have any complaints. You can say the player is not in a lot of pain, but the rules are the rules and you can’t do that in today’s game.

“Nico hasn’t played that much and it was a good opportunity for him today. He stops his own progress with his behaviour. He looked frustrated and I thought this game would be good for Pepe. Leeds play man-to-man and I thought he would get isolated against left-back and beat them. He can do that and I thought he could be the match winner today.” 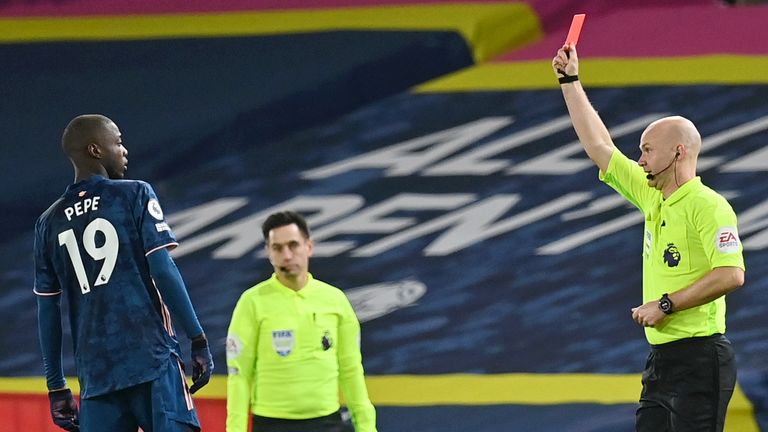 “I’m disappointed [in him]. It came from frustration. You can see early on he was already dealing with Alioski. But Pepe is not happy and it’s a little bit silly. He should apologise to his team-mates as Arsenal had a plan and everything changed after that.

“Alioski deserved an Oscar because he played it so well. If I was Leeds’ coach, I would be so happy with him. He looked like he broke his nose but he didn’t have anything wrong with him. Really, really silly from Pepe. Arteta gave him a chance, so he can’t come and cry if he doesn’t play the next game.

“In France he was happy and smiling. The £60m price tag, the fans are against him and you can see. I’m really disappointed about him. I always protect him but I can’t.”