Arsenal manager Mikel Arteta is confident Martin Odegaard and Emile Smith Rowe can start together, suggesting the duo could soon both be included in one of the Gunners’ starting line-ups, and vowed: “Good players can play together.”

January signing Odegaard, on loan from Real Madrid, started on the substitutes’ bench as Arsenal took on Wolves at Molineux in the Premier League on Tuesday night.

With the Norwegian on the bench, academy graduate Smith Rowe was trusted as the team’s main creator in a 4-2-3-1 formation with Nicolas Pepe and Bukayo Saka either side of him.

The 20-year-old has started all of Arsenal’s last eight top-flight matches and has thrived upon being the team’s creator in chief, with Pepe and Saka both in form on the left and right flanks themselves.

Although he has only supplied three assists, the north London outfit have looked a far more cohesive attacking unit with Smith Rowe in the side.

They scored 14 goals in the seven league games before the trip to Wolves having only netted 12 in their first 14 games of the season. 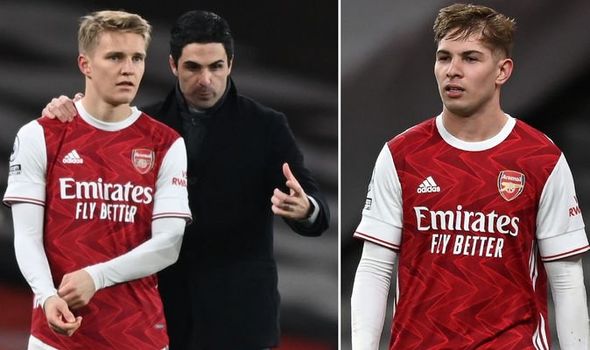 And Arteta admits Odegaard needs a little longer to fully adjust before he can start, having only made his debut in coming on for the final seven minutes against Manchester United at the weekend.

After facing Wolves, Arsenal go head-to-head with Aston Villa and then Leeds United before returning to Europa League action midway through the month.

The Spaniard said to BT Sport before the Wolves game: “When you see them training and how much they want to play and everyone is pushing because they want to be involved, you think about every possibility.

“But it’s true that he [Odegaard] hasn’t been here long enough and maybe he needs a little bit more time.” 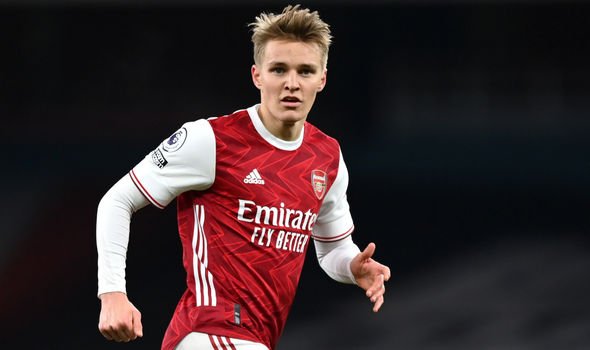 Arteta is a huge fan of Odegaard’s and spoke at length about his quality before the match against United.

“He’s a player that we followed for some time and we believe that he’s got some special qualities that we need, that we have been missing,” the Gunners boss said.

“Now we have to give him a little bit of time. He hasn’t played that many minutes in Madrid but he’s been training hard and he looks so excited, as we are, to have another big talent at our club.

“I think in the last few seasons he’s progressed and developed in the right way. I’ve followed him very closely because he played for Real Sociedad, which is my home town. I know him really well.

“I’ve been really impressed. He’s a such a talent. He needs the right environment, he needs a little bit of time but I think he’s got the qualities to be a success for us. 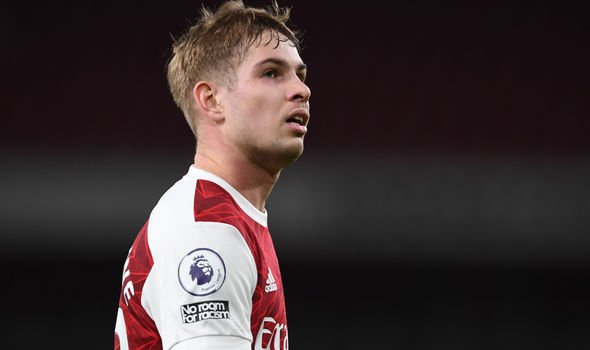 “He’s a really creative player who’s really comfortable on the ball in tight spaces. He has the capacity to create chances and to score goals.

“Something that he has improved a lot is his work rate without the ball as well, so it’s another option to give us more creativity for sure in the final third, and give us more options to set up in different ways against certain teams.”

While Arsenal’s No 1 goalkeeper Bernd Leno has said similarly after the draw against United: “I think we should all be very excited because he is an attacking midfield player who is turning, wants to go forward, wants to play passes and create chances and have assists.

“In his first days he has been very impressive and has been very open to everyone, and I think we will have a lot of fun with him in the next months.”