Neil Lennon future: Celtic fans revolt outside stadium as manager insists it's 'too soon' for him to be sacked

Celtic supporters clashed with police outside Celtic Park as they made known their distaste over another poor result – but manager Neil Lennon insisted it is “too soon” for him to be sacked.

After his side were knocked out of the Europa League on Thursday, fellow Premiership side Ross County dumped them out of the Scottish League Cup on Sunday with a 2-0 away win, sparking protests outside the ground.

Lennon could hear the shouts for him to go as he walked into his post-match media conference, and supporters were filmed tearing down fencing in a standoff with police, who have since reported injuries to two of their officers.

Lennon, who now has only the Scottish Premiership in which to turn around his second stint as manager, said: “It doesn’t make me feel good, obviously. We are not in a good moment.”

Asked what he would say to unhappy Celtic supporters, Lennon replied: “What can I say? That’s their opinion. It’s been rumbling for a while. It doesn’t matter what I say or what sort of bravado I put on. It won’t wash. I have to turn it round with results. I can only do that with the players.”

When asked if he would understand if the Celtic board took the decision to remove him on Sunday evening, Lennon responded: “No, I think it’s too soon for that. We have lost one trophy, that’s gone. Our priority is the league, it always is, every time we come into a season.

“We are out of Europe, so it’s not been great, but there’s plenty of time to turn it around. But it’s alright me saying that, we have to show it with action now. I think I should get more time at it but if not, then so be it.”

Superintendent Stevie Dolan of the Greater Glasgow Division confirmed that, as of around 4.30pm on Sunday, “no arrests have been made, however two officers sustained minor injuries as a result of the actions of the gathered group.

“We strongly condemn these actions and remind fans that enforcement options remain at our disposal. The Scottish Government regulations are clear that protests are prohibited in areas under level four restrictions and we would urge people to find alternative ways to protest to prevent the spread of coronavirus.

“Disorder of any sort will not be tolerated and appropriate action will be taken where any offences are identified.”

Celtic released a statement on Sunday night in which they said there could be “no excuse” for the “violent scenes” that took place following their defeat, and have promised to open an investigation.

“Everyone at the club is hugely disappointed by this afternoon’s result, one which has ended our phenomenal run of 35 consecutive cup victories,” the statement read. 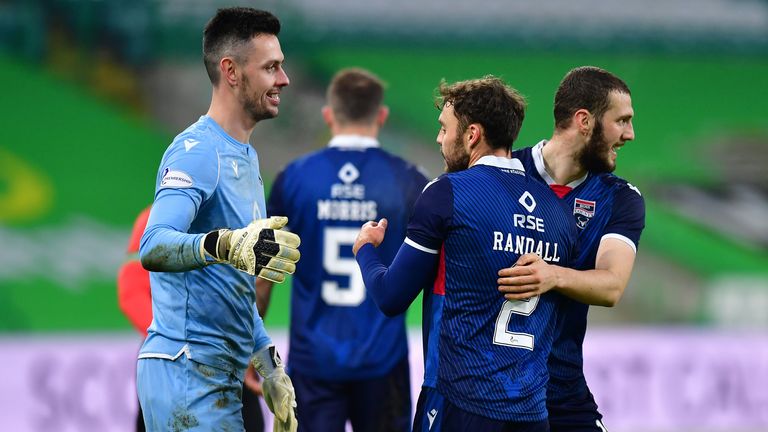 “While we sincerely share the huge disappointment of all Celtic supporters, there can be no excuse for some of the violent scenes at Celtic Park this evening. The club will be investigating these events fully.

“For players and a management team, who have given so much in recent years and have delivered 11 consecutive trophies, to require an escort from Celtic Park while being targeted with missiles is simply unacceptable.

“While we understand that only a small number of people were involved in this behaviour, some of the actions this evening – which have obviously left our own players shaken – cannot be condoned in any way.”

Celtic crashed out of the Europa League with two Group H games remaining on Thursday after their second 4-1 defeat by Sparta Prague this month left them with just one point.

On Friday, Lennon spoke about having the “full support” of chief executive Peter Lawwell and major shareholder Dermot Desmond despite mounting pressure over his tenure. The former Celtic captain, in his second spell as manager, said he was “hugely” encouraged by the support of the club’s powerbrokers.

Following two wins in 10 in all competitions, Celtic are 11 points behind Rangers at the top of the Premiership – albeit with two games in hand – and a section of the Parkhead support have made it clear they want their manager to go.

Police have begun an investigation to identify those who were involved in the disorder at Celtic Park on Sunday.

Chief Superintendent Mark Sutherland, Divisional Commander for Greater Glasgow Division, said: “I was saddened to see the disgraceful and violent scenes at Celtic Park on Sunday evening, it is unacceptable and will not be tolerated.

“Three of my officers suffered injuries, albeit minor as a result of the violent behaviour which took place. The Chief Constable has made it clear that violence towards officers and staff will not be tolerated and I am wholly committed to that within Greater Glasgow.

“We should not forget that protest of any type is illegal. While we remain in tier four and beyond, the disorder and violence this gathering presented posed a real risk of coronavirus infection to our officers and the wider community with no social distancing in place.

“We have now launched an investigation to identify those who were involved in the disorder and violence towards police officers, players and officials.

“My message is clear, if you are identified as being involved, you will be arrested. Don’t think just because you weren’t arrested last night that you have escaped justice.”