Newcastle United fans got their club back – but at what cost? 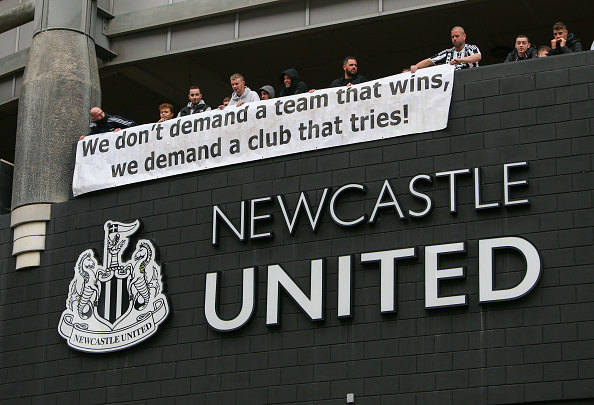 For Newcastle United fans like me, Thursday 7 October 2021 will go down in history.

For the last 14 years, fans have suffered at the hands of cockney owner Mike Ashley. The club has been relegated six times – twice under Ashley’s reign. That was until a Saudi-led investment group stepped in to change everything.

Naturally, there’s been plenty of controversy surrounding the Saudi Arabian-backed £305m takeover – set to make Newcastle United one of the richest clubs in the world – on the grounds of human rights concerns.

But when the long-awaited takeover deal was announced, after an agonising four years of it being on-and-off the table, fans weren’t standing on the plinth of Sir Bobby Robson’s statue at St. James’ Park, making it rain money or boasting how rich the club was going to be…

They simply chanted: ‘We’ve got our club back’.

Even Newcastle legend, and iconic No. 9 player, Alan Shearer said in his Athletic column: ‘It is a moment to take stock, to celebrate the passing of 14 dreadful years and to usher in something new.’

But, as ludicrous as it sounds, it’s not about the money, us fans just wanted Mike Ashley out.

For me, I’ve been a suffering supporter since childhood. I attended matches with my dad (the good and the bad), bought the calendars and had my name printed on the back of many different strips. When I was five, I was even a bridesmaid for a couple who met at St. James’ Park as season ticket holders – a tradition they still keep alive today.

Matchdays are a social occasion with strangers, many of whom become friends. You share a rollercoaster of emotions. The highs and (for us, lots of) lows. At Newcastle we fight for our club when no-one else will and don’t shy away from our voices being heard – usually in the form of large flags and banners draping across the Gallowgate End.

On a day of joy and celebration, comes a cloud of darkness and uncertainty – and it’s no surprise that the deal was questionable and ethics under scrutiny.

The Premier League approved the deal after receiving ‘legally binding assurances’ that the much-criticised Saudi state would not control the club, despite their Crown Prince Mohammed bin Salman being chair of PIF, who fronted 80% of the finances.

Many had called for the deal not to happen and those who suffered directly or indirectly from alleged acts associated with the Saudi state saw the outcome as ‘heart-breaking’ – including the fiancé of murdered journalist, Jamal Khashoggi.

The critic of the Saudi Crown Prince was brutally killed and dismembered with a bone saw in October 2018, while visiting the Saudi consulate in Istanbul. Intelligence agencies believe the Crown Prince ordered the murder – something he denies.

‘Newcastle has sold its name and reputation to a brutal government with a brutal ruler,’ Sarah Leah Whitson, executive director of Democracy for the Arab World Now said. ‘It normalises a dictator who literally goes around butchering journalists.’

Along with issues concerning human rights, sits the concerns of sportswashing – when an individual or organisation tries to use sport to promote their (otherwise poor) reputation. This is particularly concerning when nations with links to human rights abuse attempt to use sport to manipulate a positive image. A strategy Saudi Arabia is suspected to be well immersed in, but not the sole participants of.

Abu Dhabi owns Manchester City. Real Madrid and Arsenal are sponsored by Emirates – airline of UAE. Paris Saint-Germain are owned by Qatar, who are also hosting the FIFA World Cup next year. The list and links between sports clubs and states with questionable human rights records are intertwined and extensive. Proof the issue of sportswashing wasn’t born, or will die with, the Newcastle United takeover.

But, to discriminate against a club and dehumanise its supporters during the process – in which they seek to rebuild a better future and look for an owner who is willing to help them in the process – is unfair.

Newcastle United are far from perfect and neither are its fans – thanks to the forever reminder of the Sunderland versus Newcastle derby and its infamous aftermath. But no club is.

The UK Government have attempted to remain quiet regarding their opinions on the matter in order to protect relations between the two countries, although Labour leader Keir Starmer voiced his ‘serious concerns’, stating the takeover ‘should have been put through an independent regulator.’

Newcastle Central MP Chi Onwurah, despite acknowledging how celebratory the takeover is for the club, reflected on how the human rights issues concerned ‘stands in direct opposition to the values of our city’.

The UK Government themselves allows the Saudi state to purchase property, be involved in industries and even sells them military arms. The issues with the country are as much political as financial and our own government should therefore intervene in their own affairs with the nation, before thinking of criticising others’ involvement.

Newcastle United currently lack an established female football team, and if the Saudis want to be associated with the club, then perhaps helping to develop and grow the women’s team might just show some progress in the ongoing battle for equality. It’s not the solution to, or an excuse for, the state’s human rights problems, but it could be a positive first step.

Unlike Merseyside, London or Manchester, Newcastle United is one team from one city. The view from the stadium perched high overlooking the city, is iconic. The mountaineering trek to level seven, for away fans, is even more famous.

We are hardcore fans with a mediocre team. After a gruesome 14 years, all we want is someone to break us free from Ashley’s shackles, realise our potential and emulate the same belief we have in our team.

It’s one of the only football clubs to have their stadium in the heart of the city, and that’s actually where the club lies in the supporters, at the heart.