Report and highlights from the Sky Bet Championship clash between Norwich City and Brentford at Carrow Road as Emi Buendia scored the only goal of the game in the first half to fire the Canaries 10 points clear at the top.

Norwich took another giant step towards an immediate return to the Premier League when they beat nearest challengers Brentford 1-0 at Carrow Road.

A sixth successive Championship victory took the Canaries 10 points clear at the top of the table with just 12 matches left to play.

The game was settled by a moment of magic from midfield maestro Emi Buendia who scored a brilliant individual goal midway through the first half to give his side the points.

It was a fourth defeat in six games for Brentford, who are now surely battling for the second automatic promotion spot with the likes of Swansea and Watford. 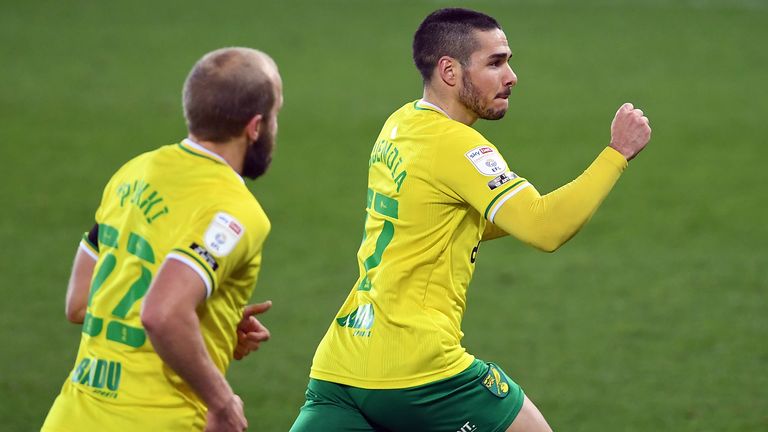 The visitors made an impressive start to the encounter and wasted a glorious chance to open the scoring after just 11 minutes.

Bryan Mbeumo skipped past Dimitris Giannoulis on the right-hand edge of the area and appeared to have put it on a plate for Sergi Canos but with the goal at his mercy the former Norwich winger slipped as he prepared to shoot and failed to even hit the target.

Bees top scorer Ivan Toney then did well to get on the end of a deep free-kick, with his effort going straight into the arms of a grateful Tim Krul.

Norwich were always a threat going forward however and got their noses in front in the 25th minute with a superb goal from Buendia.

A swift counter-attack saw the ball reach the Argentine playmaker on the right and he skipped past two defenders on the edge of the box before beating David Raya with a perfectly judged low shot into the bottom corner.

It was Buendia’s 10th goal of the campaign and he nearly added another assist to his tally on the stroke of half-time.

Not for the first time this season a wonderful through ball put Teemu Pukki clean through but Raya produced a strong hand to deny the Finn and keep his side in the game.

Raya made another top drawer save to deny Pukki again five minutes into the second half, pushing a fizzing shot from the edge of the box around the upright.

It was the visitors who were having most of the ball however but they were kept at arm’s length by a well-drilled City defence and Norwich almost made it two after 65 minutes.

Ben Gibson got his head on an inswinging Buendia free-kick to test Raya, who then comfortably gathered a snap-shot from Onel Hernandez.

Toney sent a shot narrowly wide in the first minute of stoppage time, while there were loud appeals for a penalty when Mbeumo went down in the area under a challenge from Grant Hanley, but Norwich deservedly took the points.